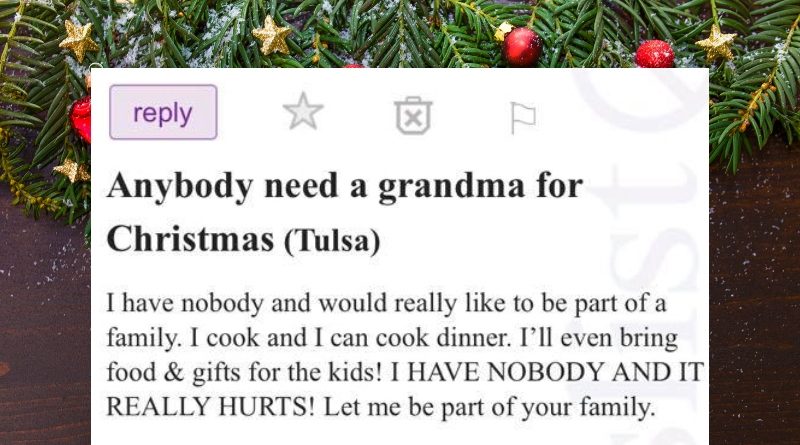 The holidays can be a lonely time for many, and some people reach out in the most unexpected ways. Such is the case here.

One recent ad on Craigslist titled “Anybody need a grandma for Christmas?” is pulling at the heartstrings this holiday season.

The person who posted it reportedly wrote: “I have nobody and would really like to be part of a family. I cook and I can cook dinner. I’ll even bring food & gifts for the kids! I HAVE NOBODY AND IT REALLY HURTS! Let me be part of your family.”

Carlock posted a screenshot of the apparent Craigslist ad, seemingly in an effort to find the grandmother.

“That really broke my heart reading that because my mom was alone on her last Christmas,” he told television station KFOR.

The original Craigslist ad from the woman who says she is the grandmother has been deleted. According to KFOR, that’s because people accused the “grandma” of having bad intentions and trying to take advantage of kind families that would have welcomed her into their homes. The Craigslist user reportedly shared an update, describing the hate as causing an “extra shot of pain” before deleting the ad entirely.

The Tulsa man who screengrabbed the Craigslist ad is reportedly determined to get support for the grandmother this Christmas.

“I just want you to know that you aren’t alone,” Carson said. “If you find yourself wanting to be a part of a family on Christmas, just reach out.”

He told KFOR he managed to reach “grandma” through email, and her name is Carrie. Due to the hate-filled messages, however, he says Carrie is hesitant to respond to people who say they’ll host her for Christmas.

People were accusing the woman of trying to freeload and take advantage of people. The woman ‘Carrie’ responded to the hate saying ‘Thank you for the extra shot of pain’ and then the post was deleted.

Carson decided to make a listing of his own asking the “grandma needing a family,” to reach out so he could help her have a wonderful Christmas. He shared the new listing to social media and the post went semi-viral over night.

He has yet to hear back from ‘Carrie’, but he is in hopes that he hears from her soon!