This wonderful photography project comes from Gabriele Galimberte, who works with Riverboom, a Swiss publishing group of journalists and photographers. From the website’s introduction:

“Gabriele Galimberti pays homage to all the grandmothers in the world and to their love for good cooking, starting from his own very Tuscan grandmother Marisa who, before the departure for his tour around the world by couchsurfing, took care to prepare her renowned “ravioli ripieni.” She was not so concerned about the possible risks or mishaps her grandson might face in his adventurous travelling worldwide, but her major concern was, “what will he eat”?

With the taste of my grandma’s ravioli I traveled around the world. Appealing to their natural cooking care and their inevitable pride in their recipe, common factors to all grandmothers in the world. I persuaded them to do their best in the kitchen. This meant moose steak in Alaska and caterpillars in Malawi, delicious but ferociously hot ten-spice-curry in India, and shark soup in the Philippines.

I returned back to Italy with a cookery book of detailed recipes that mix love, photography, and travel amongst the many other exotic ingredients.

Indeed, for each grandmother I produced a portrait of the cook, an easy to follow recipe, and an image of the extraordinary and at times mouthwatering final dish.” 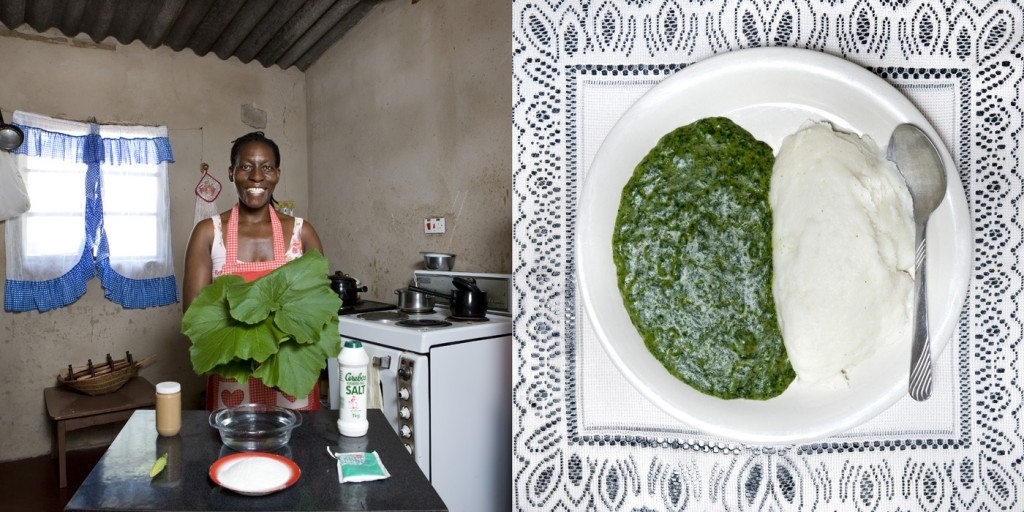 The Victoria Falls are very close to her house and that’s why a few years ago she came up with the idea to transform her living room into a small restaurant for tourists. The sign on the street in front of her house says, “Home Restaurant, Typical Food.”

Flatar cooks two, or maximum three, different dishes a day, always using her garden products or animals raised by her or her friends, and your meal will never cost more than five dollars.

Every day she wakes up very early, takes a bus to go to the countryside outside the city, buys huge bags of vegetables from the local farmers, goes back to the city by bus and, after arranging her stall for the day, she is at the market until she sells almost all the vegetables.

Fifi was born in the desert, four hours to the south of Il Cairo, in a village along the river Nile. That’s where she spent the first 20 years of her life, until she got married and, thanks to her husband, moved to the city. She lives with her husband and two of her three children in a small house in the Eastern outskirts of the capital city.

7 Ethiopia: Injera with curry and vegetables

Mrs Serette Charles, who is 63 years old, has 10 sons and daughters (all of them alive) and 15 grandchildren. She lives in the countryside near Saint-Jean du Sud, in the southern area of Haiti, not far from the sea. To get to her house it takes a one-hour 4×4 unsurfaced drive, followed by a 50-minute walk. She doesn’t have either electricity or water. She cooks using the coal that she makes. She loves cooking lambi, a Haitian type of conch.

Grace was born in Goa, in the south of India, 82 years ago and she grew up there, in between the sea and the jungle. However, she has lived her last 10 years in a new building made of concrete and glass in the northern quarter of Mumbai, with the family of one of her two sons. She is of Portuguese origin, like the majority of Indians in Goa, and as a result her cooking has a similar influence.

When I asked her to cook something typical from her country, she gave me the choice: moose or salmon. Since I had never tried it before, I chose the moose.

Eti has been spending at least four hours a day in her kitchen for nearly forty years, which is since she got married. She is 63, has always been in Jakarta and every day she cooks lunch and dinner for her husband, her 39-year-old daughter and husband, and her two teenage grandchildren.

When she cooks ravioli she gifts the whole family with a trip back to the past.

Six big photos with all the members of her family keep Boonlom company every time she prepares a new delicacy among the cookers of her kitchen. A 69-year-old mother of two daughters and grandmother of the young Mai (in the photo between the hi-fi speakers), all her life spent in Bangkok, Boonlom considers herself the best cook of her neighborhood.