Because basic geometric shapes are so simplistic in construction, they are found all over the world and have wide variety of uses and meanings. However, there are a variety of meanings that are more commonly ascribed to these shapes, particularly when used in a religious or magical context.

So let’s talk about circles. We see them in ancient drawings and scripts all across modern and ancient civilizations alike.

Circles commonly represent unity, wholeness, and infinity. Without beginning or end, without sides or corners, the circle is also associated with the number one.

In some cases, there is a distinction between that which is contained within the circle and that which lies without. Circles are often seen as protective symbols. Standing within a circle shields a person from supernatural dangers or influences outside of the circle. Conversely, a circle can also be containing, keeping that which is inside from been released.

The ouroboros is a circular symbol created by a creature feeding off it’s own tail, or else two creatures feeding off each other’s tails. In both cases, the shape created in a circle, represents such ideas as completion, uniting of polarities, regeneration, and eternity. THE ELEMENT OF SPIRIT 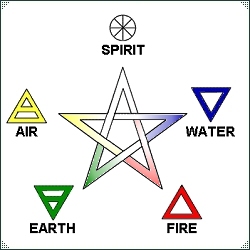 The element of spirit, seen as an element equal or superior to the physical elements of fire, air, water and earth, is commonly represented by a circle.

Did you learn anything new about the significance of circles? Share your thoughts below!

Via ThoughtCo [images via mysticalraven.com]