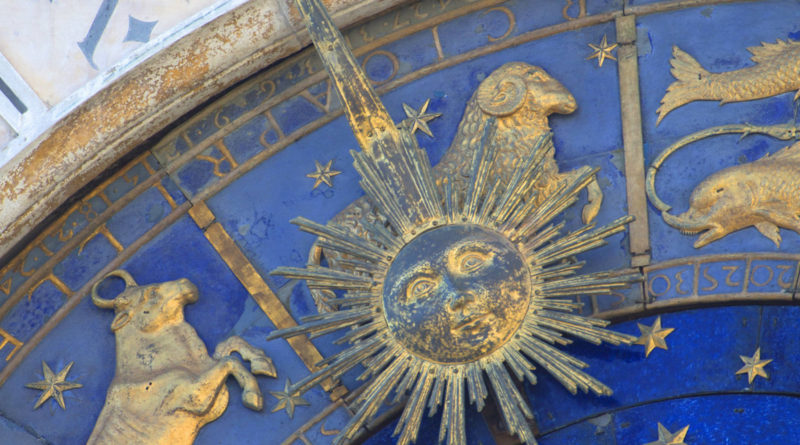 We all know that there are 12 zodiac signs in astrology. But have you ever given thought as to how they came about into being?

How did each constellation get its name? What is the significance in Greek, Roman, Babylonian, Egyptian and other ancient astrological systems?

Let us look in brief at the history of the 12 signs in zodiac.

The first sign of the zodiac, Aries, is attributed to those born between March 21 and April 20. Aries is symbolized by the Ram and element fire and ruled by planet Mars. In Greek mythology, the god of war was known as Ares. Those born under the Aries star sign are passionate and energetic.

Those born between April 21 and May 21 fall under Taurus, the second sign of the zodiac. In Greek mythology, Taurus is also linked with Zeus. It is said to be one of the oldest constellations in the universe. In the Babylonian zodiac it was called as “The Heavenly Bull.

Gemini is the third sign in the zodiac, and represents those born between May 22 and June 21. The symbol of the twins is taken from Greek mythology of Castor and Pollux. This zodiac sign is ruled by Mercury, the planet of communication, luck and good fortune.

People born between June 22 and July 22 fall under the fourth zodiac sign of Cancer. This sun sign is ruled by the Moon and reflects your emotions. The Greek mythology behind the crab stems from the story of Hercules fighting Hydra. It symbolizes the beginning of summer.

Leo is the fifth sign in the zodiac, and represents those born between July 23 and August 21. Ancient Greek mythology recognized it as the Nemean Lion. This sign is ruled by the element fire and the Sun. People born under this sign are courageous and always ready for a challenge.

Virgo is the sixth sign of the zodiac, and covers people who were born from August 22 to September 23. In mythology, this zodiac sign was associated with Demeter and Ceres and both were goddesses of nurturing and fertility. This sign symbolized by the Virgin indicates purity and innocence.

Those born between September 24 and October 23 fall under the seventh zodiac sign of Libra. This is symbolized by the Scales or the Balance. In Roman mythology, Libra was thought to symbolize the scales of justice held by Astraea, goddess of justice. It symbolizes balance between different aspects of our life.

Symbolized by the scorpion, Scorpio zodiac personality are known to be deep and mysterious. They are ruled by Pluto and Mars. The constellation Scorpius is very bright and has two stars, Lesath and Shaula that both mean “sting”. A scorpion sent by the goddess Artemis (protector of all creatures) in Greek mythology killed the hunter Orion.

If you are born between November 23 and December 22 you fall under the ninth sign of the zodiac, Sagittarius. Sagittarius in Greek mythology was a centaur. This constellation is placed such among its neighbors, that it shows his arrow pointing towards the star Antares, the “heart of the scorpion.”

Capricorn, the 10th zodiac sign falls between December 23 and January 20. This is a very old constellation. The brightest star in it, Capricorni or Deneb Algedi roughly translates from Arabic to mean “the tail of the goat.” The Greeks call it Amalthea.

The eleventh sign of the zodiac, Aquarius, falls between January 21 and February 19. This is symbolized by the Water Bearer and ruled by planet Uranus. In Babylonian mythology, it represents the god Ea, who was often shown carrying an overflowing vase.

Those born between February 20 and March 20 fall under Pisces, the twelfth sign of the zodiac. Pisces symbolizes the fish that Aphrodite and her son, Eros, transformed into. The constellation is not very bright, but the star Alpha Piscium roughly translates from Arabic as “the cord”.