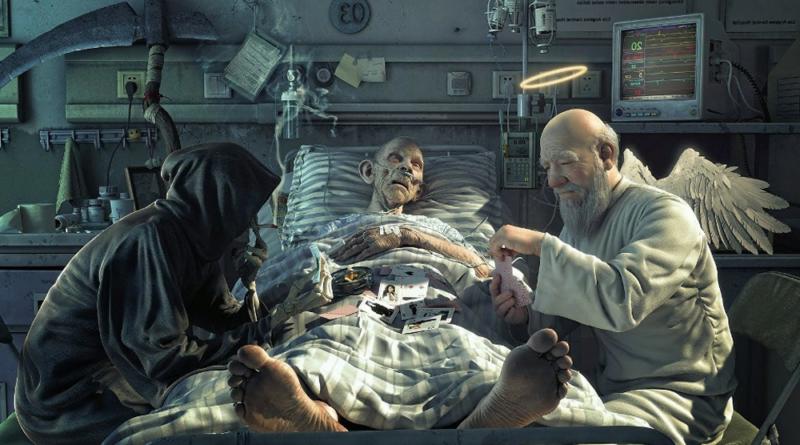 Many of us in the West live in some of the most fragmented religious landscapes in the world, but in the midst of deepening levels of conflict over policies of birth and death, these two issues that divide us also join us together. More than at any time in history, people live in expectation of similar spans of life; we all lament the loss of loved ones who die at any age; and most of us live with some fear of death, or at least violent, untimely death like the kind Alan Watts describes above.

Watts, English Zen guru of sorts (though he would not like the label) lectured more on death than perhaps any other philosophical or religious teacher since the Buddha, but he did so in a way that illuminates our ideas about the inevitable end, even if it should come upon us all of the sudden.

You heard a bomb coming at you, you could hear it whistle and you knew it was right above you and heading straight at you, and that you were finished.

This is no abstract thought experiment, of course, but the historical experience of millions of people, from Dresden to Iraq. But despite the terrifying example, Watts describes achieving in that moment absolute clarity and universality. The dreaded bomb whistles toward you, “and you accepted it,” he says.

How exactly does one achieve that acceptance? Without dogmatizing or mysticism, Watts offers some wisdom in another excerpt from a lecture above. This video’s use of melodramatic film clips and cinematic music may be a little schmaltzy, but his matter of fact talk isn’t lessened by it. Though not everyone passes on their genes to a next generation, an example he discusses in both excerpts, we do all leave the planet to make room for new people, wherever they come from, and this, he says, “is an honorable thing…. It’s a far more amusing arrangement for nature to continue the process of life through different individuals than it is through the same individual.”

Watts was not at all doctrinaire about death, particularly in his later years. In a conversation with Aldous Huxley’s wife Laura in 1968, he called dying “an art,” though not quite like Sylvia Plath did: “It is also,” he said, “an adventure.” He considered Aldous Huxley’s unorthodox death—on an LSD trip while Laura read to him from the Tibetan Bardo Thodol—a “highly intelligent form of dying.” Nonetheless, Watts, an Episcopal priest become an explainer of Zen Buddhism in America, also had a great deal to say about more formal religious ideas of death.

In the lecture above, from a 1959 American television program, Watts explains a particular Buddhist concept of reincarnation and rebirth through various realms. It’s a picture as fantastic and picturesque as Dante’s, and like his creative act, one that can be read with some literal and much profoundly philosophical significance. These conceptions help demonstrate that far from fearful, our puzzling over the inevitability and mystery of death can be, as it was for Watts, “one of the most creative thoughts I ever thought in my life.”

Written by Josh Jones for OpenCulture