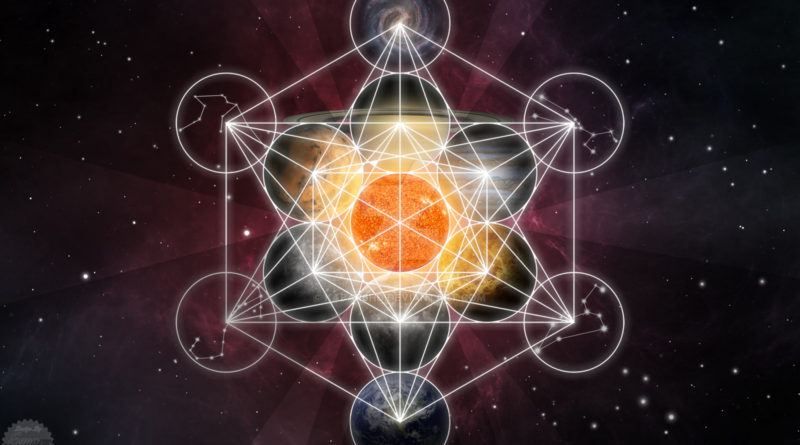 Watsun Atkinsun helps us unpack the meaning of one of the most divine symbols.

The field of sacred geometry is full of profound emblems, but of all these symbols, Metatron’s Cube is one of the most meaningful. It is one of the most multivalent geometric constructs ever envisioned, embodying the five Platonic Solids, the Flower of Life, and a Merkaba, which many mystics believe is a mechanism for forms of expansion of consciousness like astral projection. Beyond its function as a magical apparatus, it is ultimately an ancient design that unites the diametrically opposed disciplines of science and mysticism, and in doing so, has the power to open your third eye.

When you first behold Metatron’s Cube, you may say to yourself that it doesn’t look like a cube, but that’s because you’re still thinking about it two-dimensionally. If you picture it in 3-D, as if it were rotating like a flicked coin, the corners of every other point on the central star form a perfect cube, no matter which way you spin it. “Metatron’s Cube consists of a series of 13 spheres,” explains Watsun Atkinsun, an experienced symbolist, self-proclaimed mystic, and progressive blackwork tattooist . “By connecting lines to the center of each sphere, you create the figure, which essentially represents the essence of life itself. It is the highest symbol in all of sacred geometry.”

Though Metatron’s origins are debated by religious scholars, some of the earliest references to him come from Jewish Apocrypha and the Talmud. In these texts, he is depicted as a prophet — possibly Enoch (because of this passage from Genesis: “Enoch walked faithfully with God; then he was no more, because God took him away”) — who ascended to the rank of archangel. His character is known as a divider and fixer of boundaries. Atkinsun describes this divine inventor as “scribe of the heavens and celestial movements above.”

Metatron’s Cube is such a thought-provoking figure because it embodies so many other shapes. “From within Metatron’s cube, you can extrapolate the five Platonic Solids, which are considered the building blocks of life itself. This concept is found in philosophy, science, and alchemy,” Atkinsun explains. “You can pull each of the figures out of Metatron’s cube.” As their name implies, these figures were theorized upon by Plato himself in his dialogue the Timaeus. He postulates that the classical elements — fire, earth, water, and air — are made up of five solids: tetrahedrons, cubes, octahedrons, dodecahedrons, and icosahedrons.

A sleeve by Nathan Mould that breaks down the various components of a Metatron’s Cube (IG—nathanmouldtattoo). #blackwork #MetatronsCube #NathanMould #ornamental #sacredgeometry#symbolism

“You can also pull out the ubiquitous figure of the Flower of Life from the Metatron’s Cube, which you see everywhere in tattoo culture,” says Atikinsun. “The two patterns fit together in perfect synchronicity.” The Flower of Life is one of the most common figures in sacred geometry and can be found in the iconography of almost every major religion in the world. It is a universal pattern that represents the act of creation itself and the interconnectivity of life throughout the cosmos.

The final element of Metatron’s Cube is the Merkaba at its heart. This portion of the symbol is the pattern that resembles the Star of David. Some mystics consider the Merkaba as a vehicle for out of body experiences. These individuals believe that it can transport them to different spiritual planes of existence through channeling the masculine and feminine energy within the self. “It’s like activating your chakra system so that you have a Kundalini experience,” Atkinsun continues. “You fully dilate your seven chakras and then blissful energy floods through them like a river through open conduits.”

If you find how Metatron’s Cube combines the realms of science and mysticism fascinating, consider getting a tattoo of the pattern. The cubes featured here are by some of the best ornamental blackwork tattooists in the world, so think about having them design it for you. Here’s a link to another piece about Atkinsun’s work. Also, if you already have your own tattoo of Metatron’s Cube, please share it with us at #MetatronsCube.