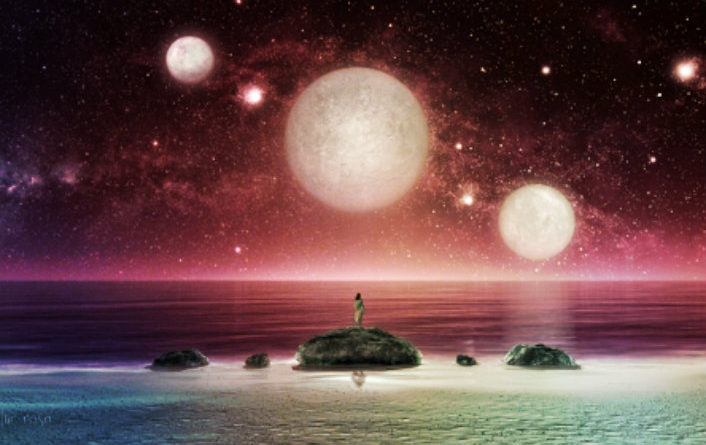 When April started, the Astrotwins made one thing perfectly clear: We are in for a world of retrogrades, stargazers. To be exact, there are four in the pipeline this month (Venus, Saturn, Mercury, and Pluto). That may sound overwhelming, but it is possible to parse them out, starting with what it means in general when these planets enter retrograde.

To begin, we are already in the midst of a Venus retrograde. The love planet will turn direct on April 15, but until then, beware of old flames coming out of the woodwork and guard your heart.

The next planet to turn retrograde will be Saturn this Thursday, April 6, and even your best-laid plans might be thrown into peril. The key here will be to proceed with care at about half the speed you normally would. You can still chase your ambitions under this retrograde, but you might save the biggest risks for after August 25, when Saturn goes direct once more.

And Mercury won’t be far behind, as it enters retrograde on April 9. No matter how you approach a Mercury backspin, it’s always a safe bet to choose your words wisely during this period of miscommunication and faux pas. Luckily, we’ll give this retrograde the slip next month when Mercury goes direct on May 3.

Last but not least, Pluto, the most mysterious of our celestial bodies, will enter retrograde on April 20. Although your everyday routine won’t be thrown off due to this retrograde, you may find yourself in a pensive mood because of it. Pluto retrogrades encourage us to reflect on sources of control in our lives. This can actually be an opportunity for empowerment if you’ve felt asleep at the wheel lately.

We know — that was a lot to process. Perhaps it would be easier if you could pick just one retrograde to focus on during the mad month of April? Ahead, with the help of the Astrotwins, we suggest which retrograde each sign should pay the closest attention to this month. That doesn’t mean you won’t feel the effects of the other three, but amidst all of this activity, we can use all the guidance we can get.

Aries
Watch out for Venus.

Venus was camped out in your sign for all of March and only left this past Sunday. To say you felt the effects of its retrograde last month is an understatement — and though Venus won’t return to Aries until April 28, you still have reason to be wary of the love planet’s backspin. You hate thinking something is off-limits to you, Aries, but think twice about that office flirtation or ex-lover before making any moves you may regret after April 15.

Taurus
Watch out for Saturn.

When Taurus season kicks off on April 19, you’ll feel supercharged with ambition. New projects, relationships, and hobbies will appear particularly enticing to you while the sun lights up your sign. Don’t temper that energy, but do read any contracts twice before committing to anything binding. Saturn retrograde puts any new plans under the microscope, so keep an eye out for any fine print.

Gemini
Watch out for Mercury.

When Mercury, the planet of communication, goes into retrograde, you may feel like your gift of gab has been muzzled, Gemini. Sure, the instant chemistry you usually feel with new people might be duller than usual, but there are ways around this retrograde’s effects. Rather than relying on conversation and instinct, hash things out in writing, whether that means writing your S.O. letters, outlining agendas at work, or simply journaling.

Cancer
Watch out for Mercury.

Sensitive Crabs would be wise to remember Mercury retrograde’s capacity for scrambling well-meaning messages this month. Don’t react too drastically to anything you hear secondhand and be clear when communicating your own feelings. Opinions can easily be misconstrued as fighting words under this retrograde and, as we’re sure you know, Cancers rarely enjoy confrontation.

Leo
Watch out for Venus.

Normally bold and confident Leos, consider this your official heads-up: The last stretch of this Venus retrograde will be a challenge for you. Like it or not, your sign can have a jealous streak. As Venus is wont to dredge up old loves (and lusts), that possessive side of yours might just rear its head. Resist the urge to call up an ex (even if you learn from Instagram that they’re in a new relationship). The best thing you can do until the 15th is to leave the past where it is.

Virgo
Watch out for Pluto.

As we said earlier, the effects of a Pluto retrograde are quite subtle compared to those of, say, a Mercury retrograde, so don’t take this as your cue to head for the hills. That said, this is an opportune time to reflect on your signature take-charge approach to life, Virgo. Are you being too rigid with someone? Would delegating some of your responsibilities actually help you get more done?

Libra
Watch out for Venus.

Your master-collaborator tendencies will be at risk until Venus goes direct on April 15, Libra. You may find yourself getting distracted easily or, even worse, comparing your current partner to a past love. Check yourself before you start demanding treatment you were perfectly fine without before Venus started its backspin on March 4.

Scorpio
Watch out for Pluto.

This month’s Pluto retrograde just might usher in the start of a new partnership — as long you don’t miss it, Scorp. You don’t mind sharing the power, as long as it’s with someone you know very well. This can make you a little, shall we say, selective about who you choose to work closely with, but this retrograde may send you someone unexpected who deserves your trust.

Sagittarius
Watch out for Saturn.

According to the Astrotwins, Sags are nearing the end of a three-year cycle with Saturn, but you aren’t out of the woods yet. This year’s retrograde will call for self-discipline from even the most impulsive Archers. Practice patience and careful decision-making, no matter how tedious it may feel, Sag. This isn’t a lesson in perfection — it’s an exercise in consciousness. And yes, it will pay off.

Capricorn
Watch out for Saturn.

As the list-maker of the Zodiac, you may feel Saturn’s retrograde most intensely, Cap. Quiet your nose-to-the-grindstone urges for now — there’s no shame in pulling back to see the big picture from time to time. Even the hardest working Goat needs to recharge sometimes, and this is your invitation to do just that. Catch up on old assignments, grab coffee with a past collaborator, or even download that meditation app.

Aquarius
Watch out for Mercury.

Listen up, Water Bearers: The messenger planet will have a thing or two to say about that impromptu vacation you planned, whether you like it or not. Don’t let this retrograde squelch your wanderlust. Double-check your flights and hotel bookings well in advance — Mercury likes to garble up those key details. Making those annoying confirmation calls will save you days’ worth of stress in the end.

Pisces
Watch out for Venus.

As much as you like tuning into other people’s feelings, Pisces, avoid playing caretaker until Venus goes direct. Your usually spot-on emotional intuition will have blinders on during this retrograde, so take this time to focus on yourself. Broaden your own horizons, and let your creative side come out to play. By the time Venus exits retrograde, you’ll be back to reading people clearly (and have a handle on your own feelings, too).