First of all, you should know that the African Astrology in one of the most primitive and most accurate forms of astrology, and it is based in Geomancy.

The beginnings of African astrology are found in the development of the ancient African civilizations. The current belief is that the Africans were the most primitive of the societies to have become interested in the stars, invented names for the planets and to have begun a study of astrology.

Geomancy is the root technique of African astrology. When bones are tossed down randomly and form lines and arrows this type of divination is called geomancy. The lines would then be organized into three levels. The base level uses a bone (one of the three bones thrown) in a vertical line, and the other two levels are then formed of one or two lines. In this way they create a 12 figure image, and through this technique the African zodiac was created.

As is the case in so many types of astrology, the Africans have 12 zodiac signs that are related to the 12 figures made out of the bones. The figures are: The Baobab Tree, The Wealth of Amber and Silver, The Family, Small Services to the Neighborhood, The Market, The Ancestor, The Judge, The Kola Nut, The Travelers, The Distance, The Child of the World and The Harvest in the Granary. When we look at the names of the figures these are all items that would be of great importance as to the early Africans. What emerging civilization is not always concerned with the harvest, wealth and the family? The Baobab African zodiac sign is considered to be one of the strongestsince it’s said that natives of Baobab are firm, stable, and strong, like this tree which has been said to be invincible. They have the resources to conquer, resist, and stand the test of time,since they have the gift of self-confidence. Integrity, honesty, reflection, and cleverness in business give this sign of the African Horoscope a well-structured and prosperous life. 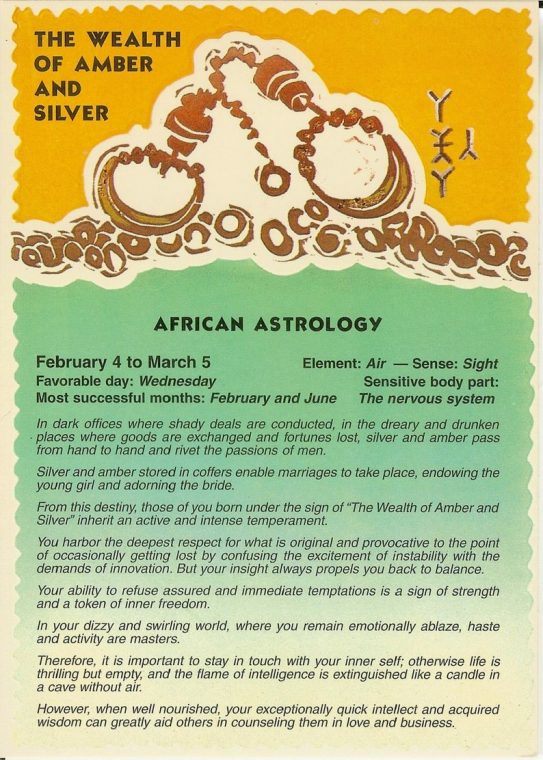 The wealth of amber and silver signers inherit a nervous and active temperament.
They harbor resent at things which are different to what they perceive in their own life.
However, their ability to refuse temptation is indeed a strength and virtue. They also have an unusually quick intellect which aids in many aspects of life.
‘Wealths’ are usually emotionally ablaze in good and/or bad ways. People born under the sign of the family are usually warm and kind but reserved, with no time to be self centered or selfish.
They are more often called upon as a consultant than they call upon others.
‘The Family’ people are destined to achieve one great act in their life times, be it in a job or day to day life.
‘Family’ loners should abandon whatever holds them back, and know that wherever they go they will nearly always be accepted. People born under this sign will always make friends easily and make themselves understood. They will always come through in a moment of crisis.
But when they have to make tough decisions they will often sink back into nostalgia in an effort to put off deciding until they absolutely have to.
Know who your enemies are and do not waste any of your gentle sentiments in seeking affection from them,
stick with your true friends and you will have many lasting friendships. In life, people born under this sign will encounter peace and harmony as well as facing brutality and danger.
They waste their energy on relationships without any future.
Sometimes dramatists, they can exaggerate crises, but they will never remain distressed for long as they never wander far from a fair benevolence. Although you often don’t intend to be, people under this sign can often be self centered, not noticing the emotions of the people around them.
The ancestor is a leader, guiding and governing. Although they can adopt a depressing and dark air, when they
learn to be light hearted and less self centered, their dreams can be realised to their full extent. ‘Judges’ often have the ability to make decisions quickly, although times of stress and ill health can affect this ability, it is still a virtue.
They have no false illusions of life and themselves and often help others extract themselves from self pity.
By respecting peoples opinions, point of views, emotions and rights, judges quickly attract friends from all directions and like a magnet, keep most of them.
Judges also have a spiritual and serene side, hidden with their active imaginations. People born under this sign can be likened to a highly unstable element- very energetic but highly unstable.
Despite this feverish existence, Kola nuts also retain a wisdom of the world which grows as the excess of youth falls away.
These people often cut corners and try to make life less conventional and more exciting.
They have an uncanny knack of irking people.
A strange aspect of this sign is a tendency towards accurate clairvoyance. A complex nature is characteristic of this sign and can often be misinterpreted by their circle of friends.
Travelers find it hard to trust their intuitions but if they do, and hold no illusions they will find that most of their outward journeys are reconciled with the inward ones.
Travelers are often overly sensitive sometimes to a point which they can hardly stand themselves. This can also be a virtue though, and will ensure that their departure will always leave sadness in its wake. People of this sign are born with strength in their cores. Instead of ignoring their intuitions they follow their instincts closely and live their lives wandering with bursts of creativity.
Impatience leads to a want for escape which is rarely defeated and can dull the natural enthusiasm that comes with this sign.
If they overcome their anxiety they can achieve great success in life.
People of the distance are often dreamers, poets and anarchists. 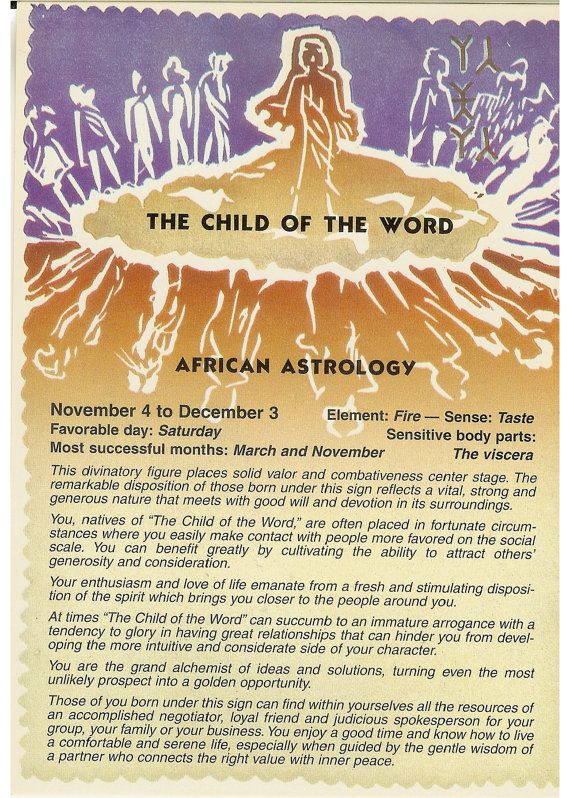 The gentle but strong and generous nature of this sign often attracts good will and devotion in its surroundings.
But children of the world have to guide against pride, which invariably leads to misfortune.
But Children of the world are not easily succumb by depression and know how to have a good time, while enjoying a serene and comfortable life. Children of this sign are always ready for action.
You attract happiness and solitude, but your feeling of security in life is misguided.
There are many obstacles in life which you could fall down on, and in love one has to exercise extreme caution!
You should learn to trust your intuition more and develop your virtues of solitude and serenity.