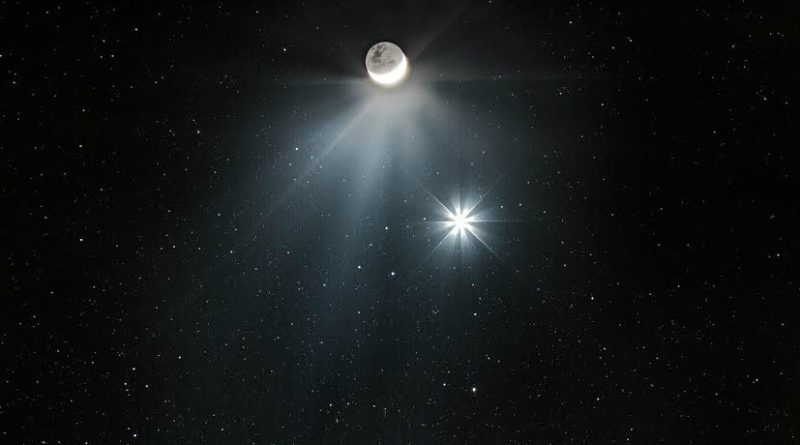 Saturday evening (Dec. 3) will be another one of those special occasions when the two brightest objects in the night sky get together. This event will likely attract a lot of attention, even from people who don’t normally spend much time gazing up at the sky.

If you face south-southwest about 45 minutes after sunset during midtwilight, you’ll see a beautiful crescent moon. And floating 7 degrees below and slightly to its right, you’ll find the dazzling evening star: the planet Venus. (Remember, your clenched fist is equal to roughly 10 degrees when held at arm’s length.)

Lately, Venus has been calling attention to itself as soon as the sun has slipped below the horizon, dazzling in the south-southwest sky, about one-quarter of the way up from the horizon to the overhead point. [Venus and Mars After Sunset and More: Dec. 2016 Skywatching Video]

Predictably, I’ve gotten quite a few inquiries about Venus in recent days. Typically, these questions have gone something like this: “I was out walking last week, and was sure I saw a UFO. Or maybe it was the International Space Station. Is there anything that could explain this sighting?”

Some folks are rather surprised when they find out that Venus has been an evening object since midsummer. And yet, most people are getting their first good look at the planet now. Of course, several months ago, Venus was considerably lower in the western sky, and setting much closer to sunset.

But the best is yet to come!

Through the rest of December and into January, Venus will climb progressively higher in the sky and consequently will set later after sundown. On Jan. 12, Venus will arrive at its greatest eastern elongation, or its greatest angular distance east of the sun. Just a few days later, the planet will be setting almost 4 full hours after the sun. And during the first 10 days of February, Venus will stand 40 degrees above the southwest horizon at sunset, soaring as high as it will get for this current evening apparition.

Keep in mind that what you will be seeing in Saturday’s sky is an illusion created by the geometry of the positions of Venus and the moon as viewed from an Earthly perspective. The crescent moon, 18 percent illuminated, is located 245,200 miles (394,600 kilometers) from Earth. But brilliant Venus is nearly 370 times farther away, at 90 million miles (145 million km).

The “dynamic duo” do not appear particularly close to each other in the sky, but their brilliance and alignment will nonetheless still make for an eye-catching sight.

Call it a “celestial ornament” for this holiday season.

What does this energy pairing of the new moon in Sagittarius and Venus mean for you?

“When Jupiter squares Pluto and Venus aligns with the new Moon, we are pushed to shift our perspective about what is important to preserve in our society and what needs to be released.

“It’s time to take responsibility for the world we live in, for our own authority—for who else is the ‘author’ of your life?

“Our choices and our actions speak to who we are. Are you happy with your choices? Did you make those choices in consideration of others’ needs?

“We have to start thinking about ‘us’ rather than only about ‘me’. We have to stop being selfish and entitled and grow up to our responsibilities.”
–
CATHY PAGANO

“A square aspect always indicates a certain amount of discomfort, which is often a prerequisite for change; if we are comfortable, we rarely look for ways to make improvements.

“We are being compelled, through the emotional uneasiness we feel…This means moving:

“As we release these patterns, we discover new ways to take charge of our circumstances and open the door to improvement and success…”
–PAM YOUNGHANS