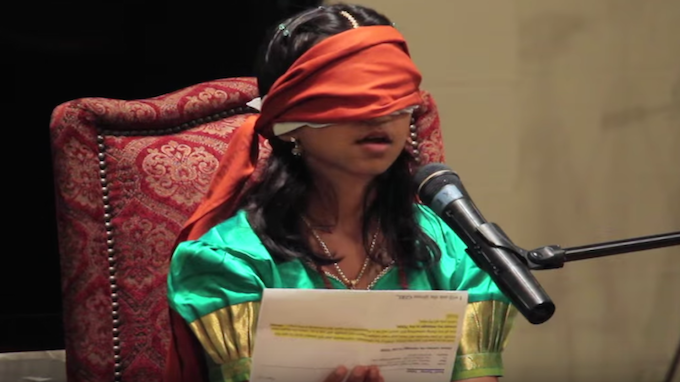 Yogamaatha is a nine year old girl in India, who attended a “third-eye awakening” course. She says she now has the ability to see things using her mind’s eye, thanks to those teachings.

Intiated by a guru, Yogamaatha learned how to harness the power of the third-eye and has since demonstrated her gift on such places as Capitol Hill, and a temple in southern California. She has played games with attendees, read random text on pieces of paper, and even repeated colour patterns that could only be done by using sight.

There are many skeptics regarding the use of the third-eye and what can by achieved by doing so. When asked if what she was doing was a trick, Yogamaatha replied, “I am not playing a trick, this is how I learned. It’s not a trick, it’s a mystical power they can learn- anybody can learn.”  Whether you believe if what Yogamaatha can do is legitimate or not, you have to admit it is cool to watch. It’s great to think of the possibilities humans have within themselves, and the many potential powers each one of us can possibly learn to activate.

The following video by Modern Nirvana shows the 9 year old girl displaying her power of third-eye sight. The interview helps to give a better understanding of what “initiation” really means, how it is conducted, and what purpose it serves. After watching the 12-minute video, make your own judgments and let us know what you think. Is this really someone who was properly taught how to activate and awaken their third-eye potentiality? Or is this an elaborate ruse in conjunction with many other mystical hoaxes?

Personally, I am not sure what to believe, but I do know one absolute: anything is possible.