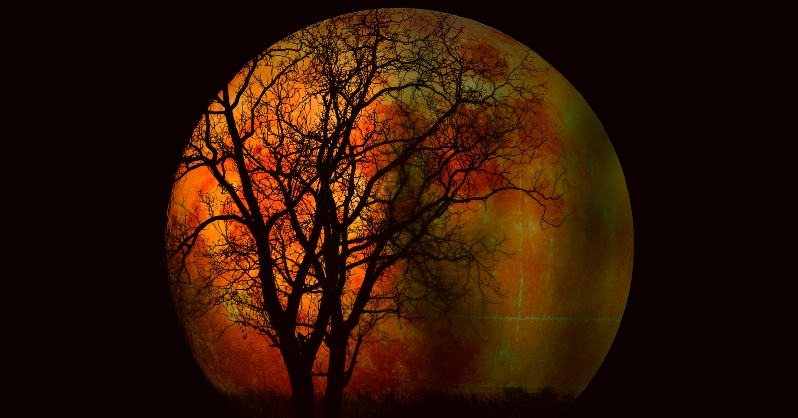 Mercury will be in Scorpio this backspin ’round, giving this transit the potential to be the most intense and emotional retrograde period this planet’s had all year. In other words, Mercury retrograde beginning on Halloween this fall is going to be the scariest thing happening this Halloween season.

Astronomically speaking, about three times a year, the planet Mercury slows down its orbit and appears to move backward (an optical illusion), which we call “turning retrograde.” It’s considered bad luck because astrology suggests that Mercury is the ruling planet of all communication, clarity in thinking, honesty and even travel and technology.

Known for being a sort of “dark horse” of the zodiac, Scorpio is a deep, intense, and sometimes dark water sign — full of emotions, loyalty, and of course, its poison-filled stinger, on the ready. “This Mercury Retrograde will be in Scorpio,” shares astrologer Lisa Stardust, who spoke with Bustle about the upcoming transit. “We will all be reassessing communications and trying to find the truths of the matters.” That said, when Mercury retrogrades through this sign, things can get intense quickly.

So when Mercury, planet of communication, is retrograding through the passionate, private, and sometimes-paranoid sign of Scorpio, we should expect deep and hidden feelings to surface — whether by way of our own revelation, or through someone else’s sleuthing.

Here’s What Your Zodiac Sign Can Expect From Mercury Retrograde In Scorpio On Halloween:

If an ex or old friend you haven’t spoken to in five years suddenly texts you, it’s because Mercury in Scorpio is notorious for bringing unresolved issues to the surface. Be prepared to deal with long-suppressed emotions, as well as some people you thought you’d left in the rearview mirror a long time ago.

While the totality of this October energy has you moving forward like a boss, Mercury in Scorpio is here to remind you to slow your roll. While your normal stance is to make a list and check it twice, and you subscribe to more of a wait-and-see mantra than a fly-by-the-seat-of-your pants motto, once you get going it’s hard for you to put on the breaks.

If you’ve been having a particularly rough summer season, I have good news. This particular Mercury transit is going to be your new best friend. While everyone else is mired in myriad misunderstandings, for you, everything will finally come into focus. “You can absorb a lot of information so this is a good time for studies and exams,” Partridge revealed on Astrology King.

You’ve had a pretty easy year so far, and all good things must come to an end. For you, the Mercury in Scorpio transit is going to be an exercise in frustration, which is why being prepared is mandatory. Adopt the motto “hope for the best and prepare for the worst” because this transit will throw up roadblocks for you at every turn.

You can use this energy to your advantage if you pay attention. During this period, others will seek you out for advice and be eager to listen to what you have to say. If anything is weighing heavily on your mind, get it off your chest before Mercury turns direct November 20th because after this others might not be as receptive and could become immune to your charms.

This Mercury cycle is going to require a lot of self awareness on your part if you don’t want to alienate everyone around you. It’s no secret that you love to be in control, and when Mercury is in Scorpio, this is next to impossible. Accept the fact that you might be late, electronics will malfunction, and others won’t bend to your will. Take an extra beat before saying or doing something you’ll surely regret later.

You already spend way too much time dwelling on what you should have said or done because you want to make everyone happy. Unfortunately, this 2019 Mercury cycle is going to bring you even deeper into the well of dwell hell. Try not to beat yourself up. You can’t make everyone happy. After all, you’re not pizza. When you start to feel dark and twisty, close your eyes focus on your breath.

This Mercury cycle is in your sign going to force you to resign yourself to the fact that no matter how hard you try, you can’t change people or make them understand you. It might feel like you’re pushing a rock up a hill every day only to have it roll back to the bottom every night. For you, Mercury’s movement is going to be hella frustrating so make sure you take some extra time for self care.

Your go-with-the-flow nature means that you’ll adjust to the changeable energy of this Mercury transit more quickly than other signs. However, you’ll still want to trust your gut and exercise a little bit more patience than normal. Anything you try to push through during this Mercury transit will likely fall apart later.

If you have unused personal days or vacation time, Mercury in Scorpio is the perfect time to take a break. However, instead of going on a trip you might want to hole up at home with your favorite Netflix series. If this isn’t an option for you, exercise extreme caution and try to fly under the radar as much as possible because this one’s going to be rough.

This Mercury cycle could have you getting in your own way to the point that you unintentionally sabotage a project or relationship that’s near and dear to your heart. While you might feel compelled to shoot first and ask questions later, this tactic will definitely backfire. If you just can’t stop yourself, consider taking a break from projects and spending more time alone until Mercury moves direct.

Mercury in Scorpio is here to remind you that it’s important to slow down and do one thing at a time. If you don’t stay grounded and pay attention to what you’re doing, you’re likely to send an inappropriate (and highly embarrassing) text or email to the wrong person. Try to get more sleep and engage in physical activities that both ground your esoteric energy and help prevent you from getting sick.