Offending someone is pretty easy sometimes. Later, you might regret the words you said, then want to make it up to the person and fix the situation. The best way to do so is to apologize to the person you’ve hurt. Genuinely, wholeheartedly.

However, not everyone knows how to apologize or even think about doing it. A person’s zodiac sign plays a big part in this matter. We have the light, honest side of your apology – and the dark (but brutal) truth too.

How Does Your Zodiac Sign Apologize? Are You Sincere?

Aries may seem a little intimidating at first to those who don’t know them, but many first impressions about them are wrong. People assume that because they are such a confident, assertive people, they don’t care if they hurt someone, but that’s simply not true. People easily forget that Aries is incredibly honest, which means they aren’t afraid to either own up and apologize for their actions or stand up for themselves (depending on the situation). It might come off as intimidating at first, but they only mean well and wish to make things right. Aries will acknowledge when they’re wrong, but they will never apologize for something they didn’t do. 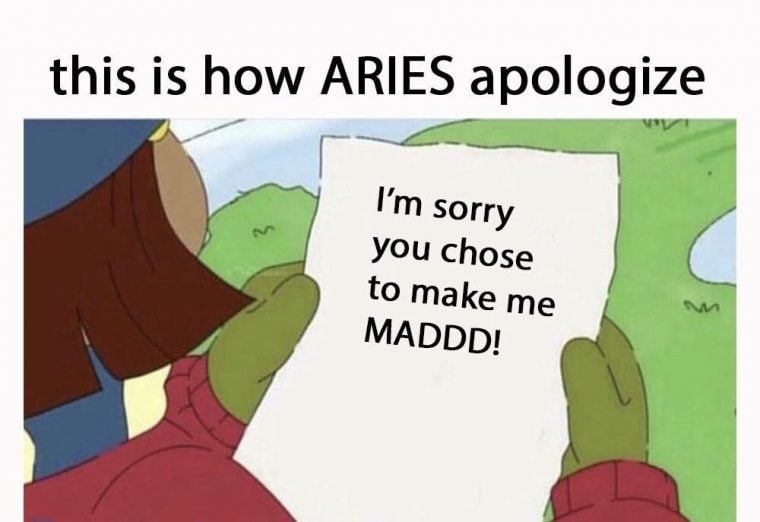 Out of all the signs, it might be hardest to receive an apology from a Taurus. This is due to their stubborn nature and attitude. They don’t really admit a mistake unless evidences and eyewitnesses back the claims. You won’t often see a Taurus backing down from an argument, but they DO know when they have gone too far. When they stand up for what’s right, they’ll always be stubborn. However, when you do receive an apology from Taurus know that it took them a great deal of strength to muster up. They mean it in the most sincere and honest way. 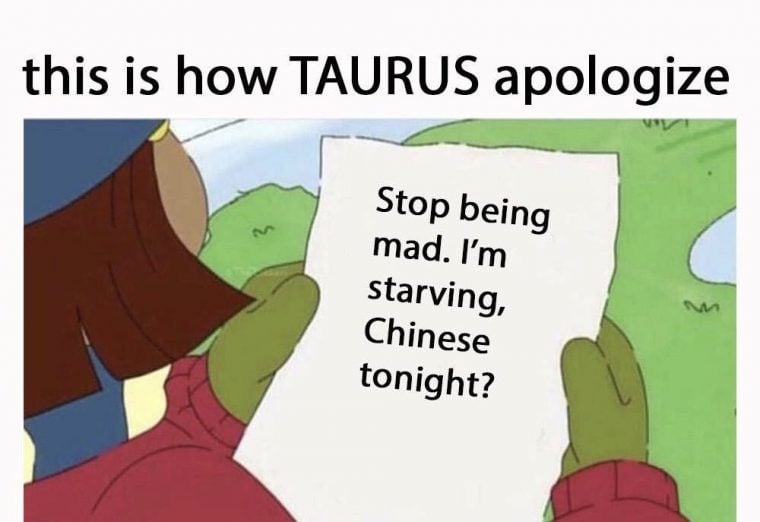 The general consensus seems to be that Geminis are too oblivious to apologize. They’re not aware that they’ve done something worth apologizing for. That said, they may act like nothing’s wrong until you straight up ask them to say sorry. They tend to get over hurt feelings pretty quickly and perhaps they just assume other people do too. If you can get a Gemini to admit their mistake, congrats you have just done the impossible. Geminis hold on steadfastly to their defense and even the most incriminating evidence won’t let them give into anything or anybody. They may not admit, but at the same time, they won’t repeat the mistake. 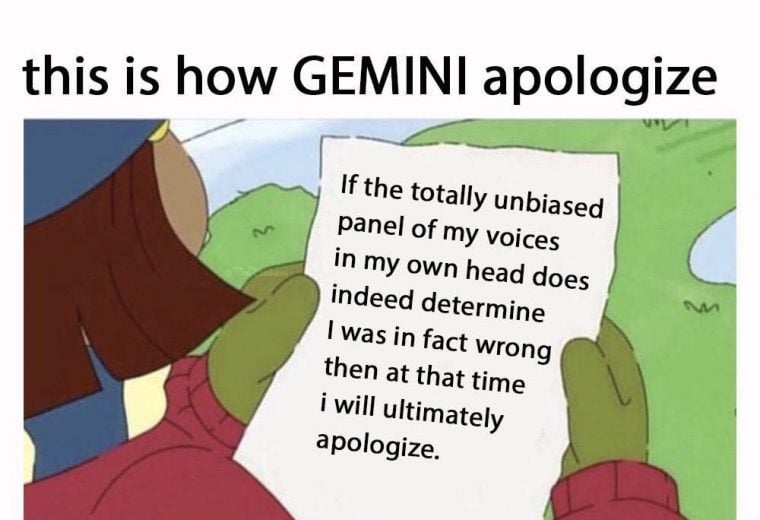 Cancer is a very intuitive and emotional sign, which means that they often know when they’ve messed up and already had an apology prepared before you know what happened. Whenever a Cancer apologizes, though, it’s always genuine and from the heart. Cancers are known to be very vulnerable and extremely emotional. If a Cancer hurts someone else, he or she suffers as much as the other person. As emotional as they are – so is their style of making an apology. Sorry, I am really really sorry. ” Shucks, that was rude. Can I send you flowers ? Can I donate you my first-born ? Can I… ” They will go to any extent to make up for their faults. You can trust that they are really sorry and that they are dying of guilt.Most of them do not act and are genuine when they apologize. 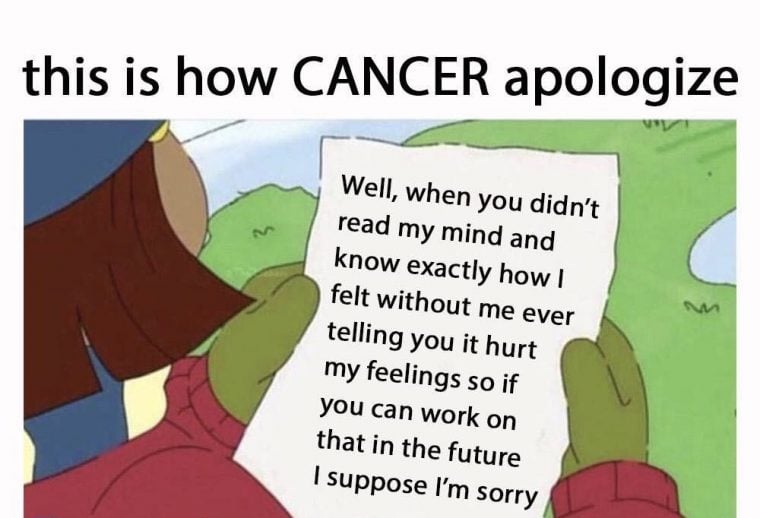 Leos are the kind who can get away with almost anything. They are so charming and conniving that even when they admit their mistakes, they are capable of making the victim feel guilty for the mistake. You’ve got to hear them to believe them. They don’t aim to hurt anyone, but instead put their foot in their mouth A LOT. They will apologize, though, if you be honest and tell them you’re upset. 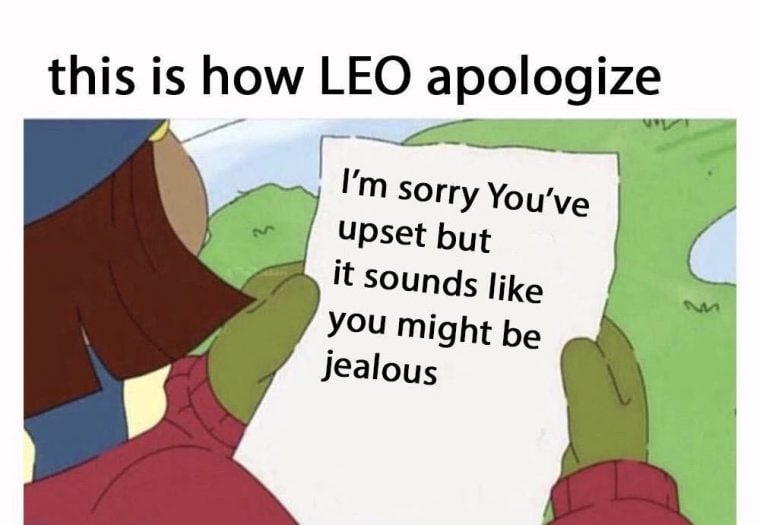 Even though Virgo is one of the most intelligent signs, Virgos still have their moments where they totally blank on how to be smart in a difficult situation. Virgos will NEVER hurt someone intentionally. Instead, they can get too into their own little world that they unknowingly say or do the wrong thing. When Virgos know they’ve messed up, they will take action immediately to right their wrongs. This can mean anything from a long, heartfelt speech explaining how sorry they are. An apology from a Virgo always feels like a hug for your heart. It’s hard not to accept an apology from these people. 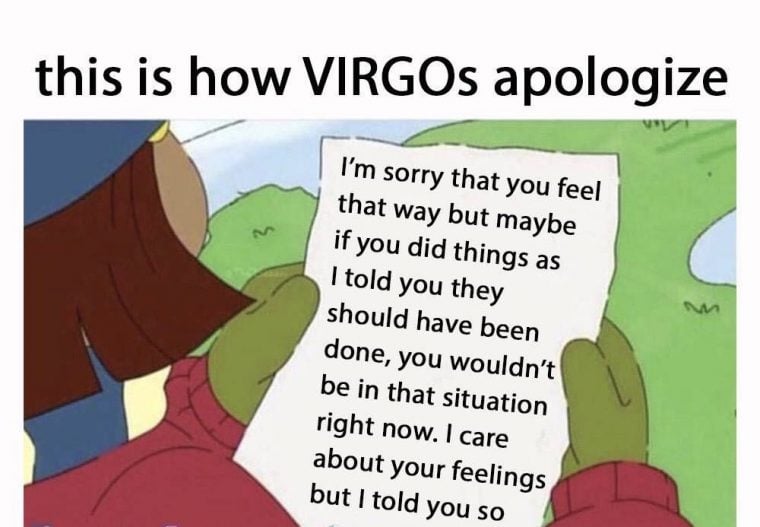 Libra will go out of their way to make sure there is no turmoil between them and their friends. So much so that they would rather not say or do anything that could cause a fight instead of sticking up for themselves. When it comes to apologies, Libras often abandon their principles to keep the other person happy. However, for this reason the apology might not seem truly genuine. 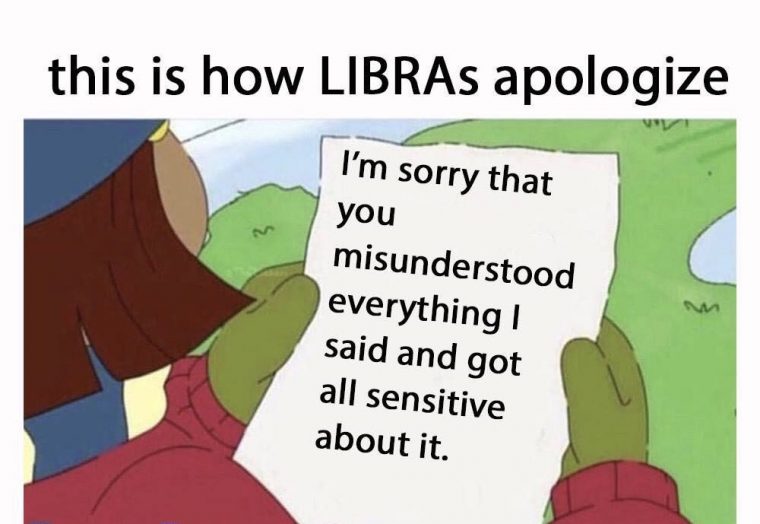 It’s probably a good thing that Scorpios aren’t in favor of apologies because they’re probably not sorry in the first place. Scorpions believe that there are no such thing called a mistake and that it all depends on how destiny conspires. So rarely do they repent their actions. Why should they apologize for something that will most likely benefit the other person? The Scorpio perspective is that they never do anything wrong in the first place, so why should they say they’re sorry, especially when they’re not? That would be lying, and Scorpios most definitely aren’t into that. 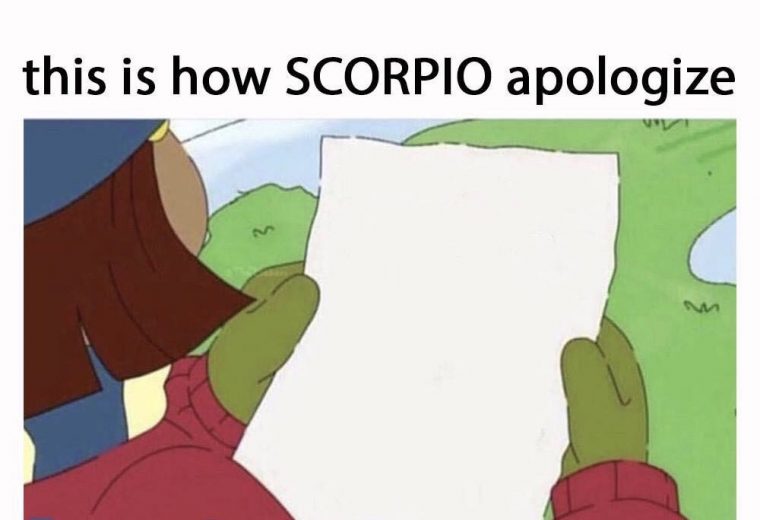 These folks are quick to a mistake and even faster in making up for it but keep this in mind, Sagittarius can be very unapologetic people that refuse to apologize. It’s a good thing that Sagittarius are extremely good at communication because they’re able to come up with a variety of ways of apologizing without actually apologizing. They may give you a gift as their way of apologizing or take you to an appointment – anything to distract you from the fact that they aren’t saying sorry. The good thing is that even though they won’t admit they made a mistake and/or they’re sorry about it, they probably won’t make it again. 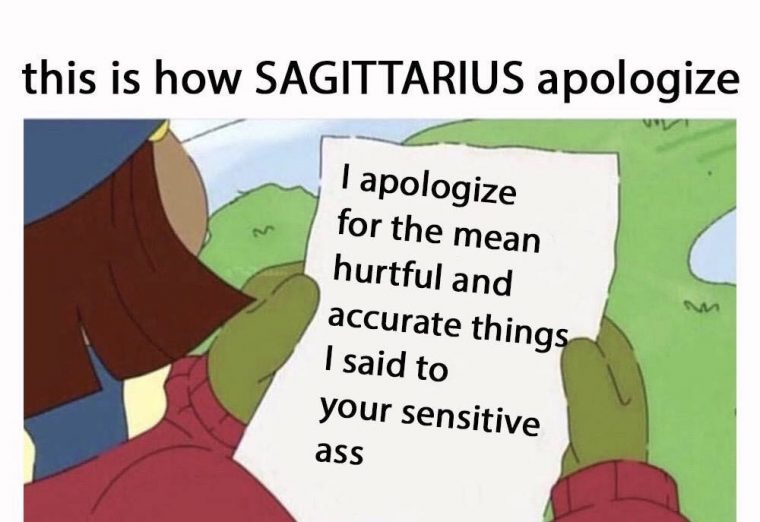 It may be due to the fact that Capricorns are quite stubborn that makes it so hard for them to suck it up and apologize. It’s not that they’re not sorry or remorseful, they just tend to internalize their process in regard to apologizing. They assume that things will go much worse than they actually do, which only hurts the situation and makes it harder to get them to apologize. When they do finally apologize, though, it’s straight to the point; they want to make sure it never happens again. 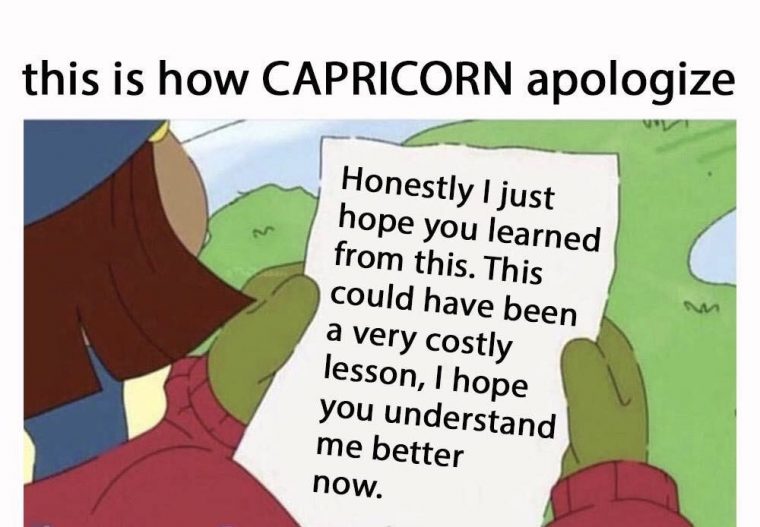 If you’re expecting an apology from an Aquarius, don’t hold your breath. They’re not inclined to apologize unless they’ve done something catastrophically wrong. They tend to think they’re usually right about everything and can be somewhat arrogant when it comes to how clever and smart they are, so they’re not going to lower themselves to apologize. When they apologize, it always comes from the heart. It might seem like they’re void of emotion, but in reality, they care deeply about the people in their life. They want their friends and family know that even when things get tense, they appreciate having people around to work things out with them. 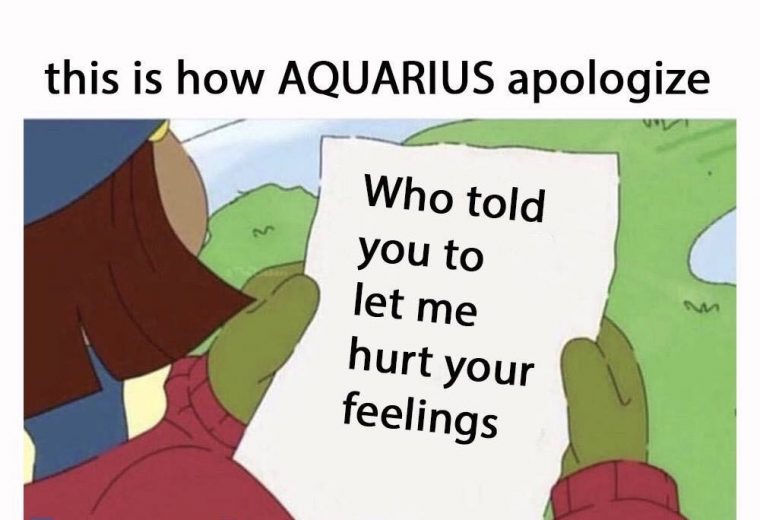 Pisces is very intuitive sign, meaning Pisces people are in touch with both their emotions and yours. Pisces hate getting into arguments with their friends, but they know that sometimes, there are situations where they need to stand up for what’s right and rustle some feathers. When a Pisces gets into an argument, it’s always in the name of justice. Pisces will readily apologize if they hurt your feelings, but they also know that some situations don’t require an apology, but a solution. They are a much more intelligent sign than people give their credit for. 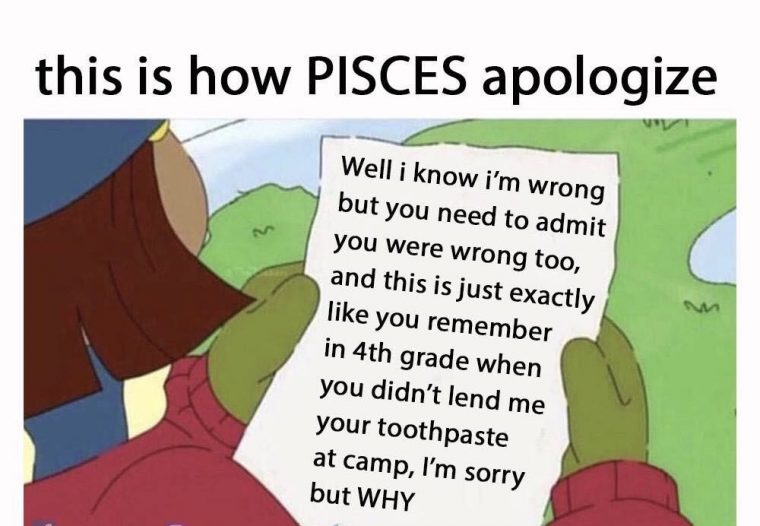