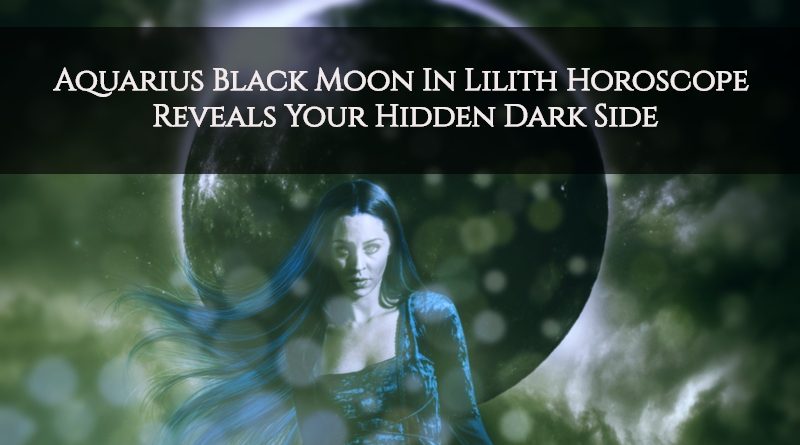 This is a very important time for revealing our true nature, and deepest desires…along with our hidden dark side.

Black Moon Lilith is the geometric point in the sky that marks the furthest point of the moon’s orbit around the earth. In an astrology chart, Black Moon Lilith represents a person’s primitive impulses and behavior in their rawest form.

This sign can bring out your most powerful feminine energy. It’s provocative, biting, and when afflicted, it can be destructive. It has such a strong influence in some people’s charts that it can disrupt their connection to reality.

Both revered and feared, the goddess Lilith has long been associated with the more shadowy aspects of spirituality. Stemming from the Hebrew word laylah, meaning “night,” her symbols include creepy crawlers such as serpents and the screeching owl, as well as the dark/crescent moon.

This month Lilith moved into Aquarius, where it will remain until May 2019, awakening consciousness around Lilith’s unpredictable and earthly instincts, and pioneering a new vision of empowered femininity. Currently, Lilith squares Uranus in Taurus and is in exact conjunction with the South Node, calling on us to birth something radically new as a collective.

If you want to know what your horoscope is for this tumultuous time, read below:

In Aries, Lilith embodies the spirit of competition. She’s politically active, channeling her rage into action that supports independence of spirit and letting her voice be heard around the world. Lilith in Aries desires complete domination over her haters, no matter what the arena. If her fierce temper doesn’t have a suitable outlet, it can disrupt the lives of those around her.

Lilith in Taurus embodies the spirit of desire. Whether it’s for love, money, or power, avarice is a spiritual practice for those with this placement. Allowing yourself to want whatever it is what you want makes you feel grounded and secure. You’re naturally desirous, and when those needs aren’t fulfilled, you’re capable of emotional outbursts worthy of Kanye West himself.

Feline curiosity is at once the Lilith in Gemini’s greatest strength and weakness. You’re mentally voracious, and never one to shut yourself off from any manner of experience. Lilith in Gemini will try anything once, as there’s a good story to tell afterwards. If there was to be a problem here, it’s that the omnivore in you will inevitably get a taste of something that’s not as sweet as you’d hoped. Will it be worth it?

In Cancer, Lilith struggles to reconcile the feminine-as-nurturer dynamic with the all-consuming seductress energy that is her essence. It’s a weird combination, but one that works. Consider dark mother goddess Kali Ma, or Anjelica Huston, who plays modern dark matriarch Mortitica Adaams. Your potential downfall? Caring for others who don’t care for you.

Lilith in Leo embodies the spirit of pride. At their best, they exude a golden aura that mesmerizes those around them. They have an otherworldly charm that they can use — or manipulate — to their advantage, especially on stage. When channelled negatively, pride turns to vanity and these individuals seek only to magnify themselves. Their ability to glamour is just that: an illusion.

In Virgo, Lilith is the embodiment of envy. These people take Virgo’s obsession with perfection to new heights, often making them a study in beauty and achievement. No wrinkle is left unsmoothed, no detail unedited. If there was to be a problem here, it would be allowing a hypercritical inner monologue to sabotage their potentially fragile self-esteem.

In Libra, Lilith struggles to reconcile the feminine-as-partner dynamic with the independent demoness energy that defines her. Together they manifest as the “perfect specimen”, both desirable as a mate but individuated enough still maintain some mystery. Alternately, this can play out in various other sordid scenarios. Even though you may romanticize the idea, don’t lose yourself in these kind of relationships.

Lilith doesn’t have an official ruling sign, but many astrologer suggest Scorpio as her ruler, given the sign’s association with taboos. Lilith does feel at home here, with amplified powers of seduction, business acumen, and psychic connection. What more can you ask for, really? The only caution here is: use your powers wisely. Don’t strike out unnecessarily, because karma may be less than kind.

In Sagittarius, Lilith seeks glory. Whether it’s the most exotic vacation or the wildest party, Lilith in Sagittarius with go to great lengths to ensure that all eyes will be on them. They’re entertainers by nature, and aren’t afraid of rock-and-roll excess. The difficulty comes when this Lilith is forced to deal with mundane concerns or the feelings of others. The truth can hurt.

In Capricorn, Lilith embodies the spirit of greed. Capricorn thrives on business success and social status, and with Lilith here, the thirst for both becomes insatiable. It’s an impressive driver for “Started From The Bottom” style accomplishments, but it’s not as practical as it may seem. Whether it’s in the bedroom or the boardroom, this Lilith is always looking for an investment piece.

In Aquarius, Lilith is the embodiment of rebellion. Conventional notions of romance bore them. At best, Lilith in Aquarius inspires artists, politicians, and visionaries far beyond their time. Their hopes, dreams, and desires are completely out-of-this-world — so much so that many of their worldly companions find them distant or alien. Are they walk-ins? You decide.

Reverie becomes the Lilith in Pisces, so much so that they can lose themselves in daydreams and never find their way back. They much prefer fantasy to reality, but only because they want to be surrounded by beauty. Some try to escape the harshness of the present via substances, but if they avoid this, they can be gifted empaths, healers, poets, and artists.

Here is what is most important:

The Black Moon is not a verdict, but a lesson. Knowing in which situations you are particularly inclined to show weakness, you can control and overcome yourself. Thus inner harmony is restored, dark karma is neutralized: the soul is filled with light, and fate becomes more favorable.