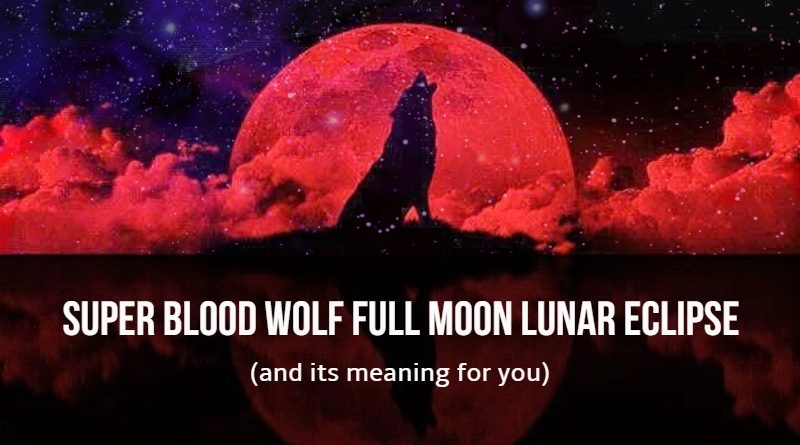 There is a powerful cosmic event happening this month, and it will have a direct impact on every zodiac sign.

There will be a spectacle overhead, premiering late Sunday, January 20—and if you live in the Americas and Europe you’ll want to stay up to witness the SUPER BLOOD WOLF FULL MOON LUNAR ECLIPSE that will be visible in the night skies.

Astrologically speaking, this full moon with a mouthful of a name could set off some unanticipated drama. As evidenced by the blood-red cast that we’ll see from 10:36PM EST on January 20 until 3:48 AM EST on January 21, eclipses reveal shadows. And metaphorically, they’re known for revealing the shadowy side of humanity in all its jaw-dropping glory. It’s likely that we’ll witness more “luna-cy” than usual while the wolves howl and the full moon hovers at the closest possible proximity to Earth—hence its status as a supermoon. In astrology, the moon is the heavenly body that rules our emotions and desires.

This powerful Full Moon is in the sign of Leo.

This is actually the final Leo eclipse in a series that’s been striking the Leo-Aquarius axis since February 10, 2017. In fact, the stunning Leo total solar eclipse of August 21, 2017 was part of this same lunar thread. Stories and situations that have been developing since then could hit a surprising arc this January.

Eclipses always arrive in pairs, hitting opposite signs simultaneously, for approximately two years. That’s part of their drama, as they push and pull us in totally divergent directions.

On a personal level, this full wolf moon could send up a lupine howl, calling forth the leaders in us all. Where could we step up in our lives a and take on greater responsibility for the good of all? How can we use our style, charisma and influence to create a deeper sense of connection and social justice in our communities?

On a much sweeter level, this Leo lunar eclipse could usher in some early Valentine’s Day vibes. If an attraction has been aging like a fine wine over the past couple years, it’s officially time for an “uncorking.” True confessions could come rushing out before we can stop ourselves, or an unexpected heartthrob could cop to a crush. Couples could tap into long-buried desire—even after having a good-old-fashioned “keep it real” argument that’s been brewing for a longggg time.

Here are some of the surprising ways the eclipse could impact your zodiac sign:

Aries: Major romantic developments (even an engagement or pregnancy) or a burst of creative genius that could become profitable in 2019

Taurus: News from a family member or changes at home, from a renovation to a relocation

Gemini: Major shifts with your friend circle or the launching of a powerful partnership

Leo: Catapulting your talents and hard work of the past two years into the public eye.

Virgo: Helping you forgive a frenemy or gain closure on a painful situation. Bye!

Libra: Connecting you to your “soul squad,” boosting popularity

Sagittarius: Bringing a long-distance opportunity or a chance to travel

Capricorn: Deepening your connection to one special soul—and maybe breaking you away from a toxic relationship elsewhere

Aquarius: Revealing the right—and wrong partners for you