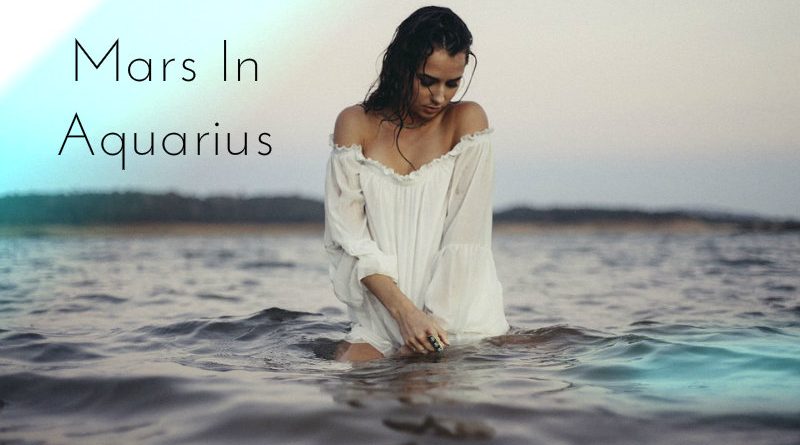 Is it just us, or has Mars been at the center of most astro-related news in the last few months? Whether it’s retrograde, scooting backward into all-business Capricorn, or going direct and supercharging our sense of motivation, the red planet has certainly kept things interesting on planet Earth lately. And the latest curveball it’s lobbing our way is a movement into a sign that few would describe as all-business.

After its brief stay in Capricorn, Mars is back in Aquarius, the sign of invention, disruption, and the future. Given Mars’ influence on action, confrontation, and confidence this has the potential to be a rather volatile combo.

Like we said, Mars is always in driver’s seat when it comes to our tempers and energy levels, but the exact effect it has on these parts of our psyche depends on which sign is hosting it. When Mars was in Capricorn, for example, we might have been especially ambitious at work or persistent in otherwise level-headed discussions. Meanwhile, if Mars is in Cancer, we might be a little more guarded and sensitive, particularly when dealing with conflicts.

If you have any experience with Aquarians, you probably already know that putting them anywhere near a cosmic “driver’s seat” means taking the road far less traveled. And, until November 16, when Mars moves into Pisces, we’ll all be imbued with a little bit of that rebellious, anti-status quo energy.

Don’t expect to go full-on Rebel Without A Cause, but do watch out if you’re suddenly feeling a tad more combative than usual. Confrontation, Aquarius-style, tends to start with a firm line of questions aimed directly at the nearest authority figure. Resist the urge to go off half-cocked at your boss, landlord, or elder relative during this period. Instead, tap into the equally powerful (and equally Aquarian) urge to think outside of the box.

As a cerebral (yet eccentric) air sign, Aquarius would always rather use its wits to find a way around difficulties, rather than to stir up drama. So, when addressing tricky problems, big or small, this month, don’t be afraid to try out an unconventional solution or swing-for-the-fences big idea — it just might work under these skies.

Whatever issues you run into, staying put and doing nothing probably won’t be an option. As astrologer Debra Anne Clement writes, Mars in Aquarius is a highly dynamic combination and it usually rewards a willingness to evolve and change in the face of challenging situations. That may sound unpleasant for the more stubborn signs out there (hello, Aries, Taurus, and Capricorn), but it’s totally doable (and doesn’t have to be a huge deal). Maybe Mars in Aquarius will simply remind you that you’re bolder and braver than you think — even if all you want to do is get a second ear piercing or tell your roommate to pay their rent on time for once.