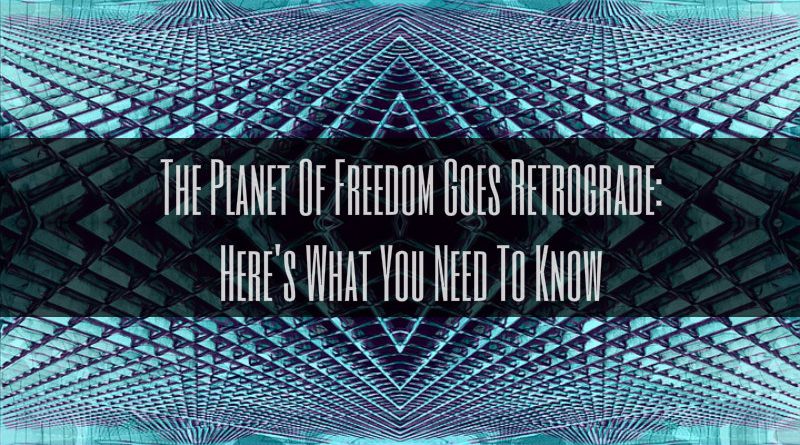 As an outer planet, Uranus moves slowly, taking 84 years to complete the zodiac and spending roughly 7 years in each sign. Sometimes, however, Uranus appears to move backward in the sky; this visual backward motion is known as Uranus retrograde. In astronomy, this is referred to as ‘apparent retrograde motion’, but in astrology, the term is most often shortened to ‘retrograde.’

Uranus stations retrograde once every year, spending just under half of the year retrograde; these retrogrades normally last five months. During these transits, Uranus appears to move backward in the sky, recovering approximately four degrees each retrograde. Overall, Uranus spends about forty percent of its time in retrograde.

HOW DOES URANUS RETROGRADE AFFECT US?

With Uranus transits, we are given a choice: change or die.

What Uranus threatens us with not physical death, but a creative, soul-level withering, an inability to thrive that if allowed to settle within, would rot us from the inside out. Without Uranus’ upending ways, many of us would nestle deep into our most familiar ruts and never look back, comfortable in our ambivalence. Uranus pushes us past the edge comfort, and further still: it is at these boundaries, somewhere between order and abject chaos, where genius and creativity thrive.

Uranus shows up in our lives as both the crackle of lightning which burns down our most prized structures as well as the enlightening bolt of intuitive knowing that evokes innovation. Vacillating powerfully – and unexpectedly – between breakdown and breakthrough, Uranus’ transits are notoriously difficult to predict in astrological interpretations and singular in their ability to produce out-of-the-blue, shocking outcomes.

More positively, Uranus acts as an awakener, prodding us to face those things which we may intuitively know already but struggle to otherwise confront. These wake-up calls, which are often brutally timed, may force us to let go of parts of our ego-identities which are in danger of suffocating the entire system.

Aries’ may feel as if they’re finally out of the hot seat since Uranus left your sign for pastures anew in May 2018. Don’t get too comfy though: Uranus will be back on your home turf once again between November 2018 and March 2019.

Use the Uranus retrograde in Taurus for insight on how you may develop new ways to manifest more money, honey; when Uranus retrogrades back into Aries for the last time, milk these final moments of innovation for fine-tuning how you show up in the world.

Things may have been turbulent for Taureans, especially those born in the earlier part of the sign (those with birthdays between April 20 and 25, give or take a day). Since Uranus entered your sign earlier this year, it has likely thrown more than one curveball your way, possibly upending relationships and situations previously considered fail proof.

As Uranus retrogrades in Taurus, the pressure will temporarily subside, allowing you to gather your thoughts (and actions) for when it re-enters your sign again in March 2019. As the retrograde continues into Aries, you’ll be given one last opportunity to suss out how your own behaviors may be contributing to conflicts you face in the outer world.

Uranus’ entry into Taurus heralded a new phase for Gemini, requiring you to dig deep and start facing up to long-held anxieties that you’d be better off without.

The good news is that the Uranus retrograde in Taurus will offer you a temporary reprieve to regroup and identify the right support team to help you wade through these deep waters. As Uranus continues its retrograde into Aries, you’ll be thinking one last time about the groups and friendships you associate with, as well as what truly motivates you.

After seven long years spent grappling with Uranus in the part of your chart related to career matters, you’re due for a change. Uranus now looks to bring that same intensity of innovation to your hopes, aspirations, friendships, and collective movements.

Anything you’re fomenting in that space may temporarily cool off as Uranus turns retrograde in Taurus, not to return again until March 2019. As Uranus continues to retrograde in Aries, take one last look at your career aspirations, and adjust accordingly.

Leo is ready for the spotlight (even more than usual). With Uranus newly entered into the house of your chart related to reputation, honors, and career, you’re likely to have grand new visions about how to get your message out there.

Uranus’ retrograde will put those plans onto the back-burner until March 2019 – don’t lose the faith just yet! Instead, use the Uranus retrograde to revisit any changes you’ve made thus far; when Uranus returns to Aries one final time, you may wish to firm up the beliefs and axioms that will best support you as you climb the summit.

Uranus has been in an ultra-touchy, not-so-pleasant part of your chart for nearly seven years, provoking you to confront your deepest, most primal emotions; as it moved into Taurus earlier this year, you could finally envisage a light at the end of the tunnel.

Uranus will now retrograde, retreating away from that hopeful, promising place you had recently entered, which may have got you investigating new paths in travel or education. As Uranus retrogrades, you’ll be reviewing those plans intently, and as Uranus re-enters Aries for the final time, you’ll be able to set to rest any lingering worries.

There may have been a recent urgency to start sussing out give and take in relationships since Uranus entered Taurus in May 2018. Relationships in general may have been bumpy the past seven years as Uranus transited the part of your chart tasked with meeting ‘the other’ in love and work.

Now, the journey takes you deeper still, into the unspoken agreements that underpin power dynamics in relationships. As Uranus retrogrades, things will slow down, allowing you more space to ruminate on these revelations; Uranus’ temporary re-entry into Aries will give you one final window for injecting your intimate partnerships with adequate freedom.

Scorpio’s may have gotten a shake-up call since Uranus entered Taurus in May 2018, forcing a necessary review of one-to-one partnerships. Over the next seven years, Uranus’ transit of Taurus will demand that you find new ways to match, meet, and marry.

Now, however, Uranus will retrograde in both Taurus and Aries. While Uranus retrogrades in Taurus, any turbulence in relationships will settle down for now; when Uranus enters Aries for the last time, you’ll have a golden opportunity for making much-needed changes in work and health.

Uranus’ entry into the part of your chart concerned with health, work, and day-to-day life may have you desperately wanting to break away from routines, schedules, and your office cubicle.

With the Uranus retrograde occurring in the same space, you’ll be able to handle mundane life more peacefully until Uranus returns to this space in March 2019. Uranus’ final retrograde into Aries will awaken any latent urges for creativity and pleasure; following these impulses may help you reclaim a sense of joie de vivre in the face of impending responsibility.

Having had Uranus in the part of your chart related to home, family, and foundations, it may have felt for the past seven years that you were unable to find solid footing. Uranus has now entered the area of your chart dedicated to life’s little luxuries, powerfully re-connecting you to pleasure.

Uranus’ retrograde will have you re-thinking any recent shifts you made in your approach to romance, creativity, and sex, while Uranus’ continued retrograde into Aries will have you revisiting your attachment to home and family one final time.

Some Aquarians may be considering big changes in their home and family life, owing to Uranus’ entry into Taurus in May 2018. That may mean breaking away from one’s roots or forcefully putting down new ones that better resonate with who you are (or aim to be).

If those changes seemed overwhelming, respite will come as Uranus retrogrades in Taurus, giving you a little breathing room before making any final decisions. As Uranus continues its retrograde into Aries – the last of your lifetime – you can settle up issues regarding siblings, community, and communication.

As Uranus entered Taurus, Pisceans may have felt their synapses firing at an all-time high: with Uranus electrifying the part of your chart associated with correspondence, writing, and short-distance travel, your energies may have felt scattered and jagged.

During the Uranus retrograde in Taurus, your mental pace will slow down, and writing or speaking projects may be put on hold temporarily. Once Uranus enters Aries again as part of its retrograde, you’re likely to make swift changes in matters of money.