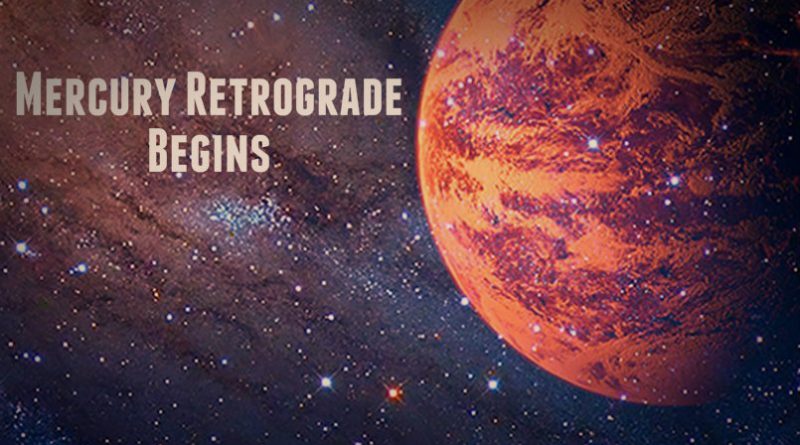 Every planet goes into retrograde from time to time, but Mercury’s retrograde cycle is the most frequent and most well-known. Three times a year, Mercury, ruler of communication, travel, technology, and intellectual thoughts, appears to move backwards in the sky for about three weeks.

Mercury doesn’t actually move counter-clockwise—its orbit around the Sun is faster than ours, and this causes the optical illusion of a backwards-moving planet. When a planet is in retrograde, the themes and energies it embodies are reversed and internalized, which can make you feel like you’re swimming against the tide.

Considering Mercury’s close association with communication and interpersonal relationships, it can make socializing feel like dodging bullets when it goes retrograde in a touchy, temperamental fire sign. When it takes place in Leo specifically, we ought to brace for misunderstandings in which our pride and egos are on the line. Even the humblest among us could end up taking offense to minor remarks or a single rumor about them.

The trick to getting through any retrograde is to move slowly and deliberately — and this summer of retrogrades galore is no exception.

Mercury retrograde officially begins on Sunday, July 7. The very next day, Chiron, an asteroid in everyone’s birth chart, goes retrograde on Monday, July 8. This asteroid is known as the wounded healer and represents the parts of ourselves that are our most painful struggles.

While Chiron is retrograde, we have an opportunity to heal old wounds. It’s the middle of July, typically a time for summer flings and pool parties. Cutting loose under the influence of eclipses and retrogrades may seem difficult, but it’s worth trying, so consider this beautiful mess of astrological events a chance to relax and reflect. Let the answers arise; the universe is encouraging it. Now is the time to welcome answers, craft a plan, and then put it into action later in the month.

Cancer can bring out the passive side of Mercury, so despite all the chaos, this retrograde will start out brutal then end fairly mild. You’ve lived through worse.

While Cancer is an emotional water sign, it is also a cardinal sign, meaning it kicks off a season. Cardinal signs, which also include Aries, Libra, and Capricorn, like to be first. Communication errors will likely be about power dynamics within both professional and personal relationships. This entire Mercury retrograde it’s important to take time for meditation and mental clarity. Should drama occur, you will be calm, confident, and able to keep your side of the street clean.

Until Mercury goes direct on August 1st, make sure to guard your heart, keep offhand comments in perspective, and, if you can’t help but engage in a little gossip, double- and triple-check who’s in your group text before hitting send.

By SARA COUGHLIN For Refinery29