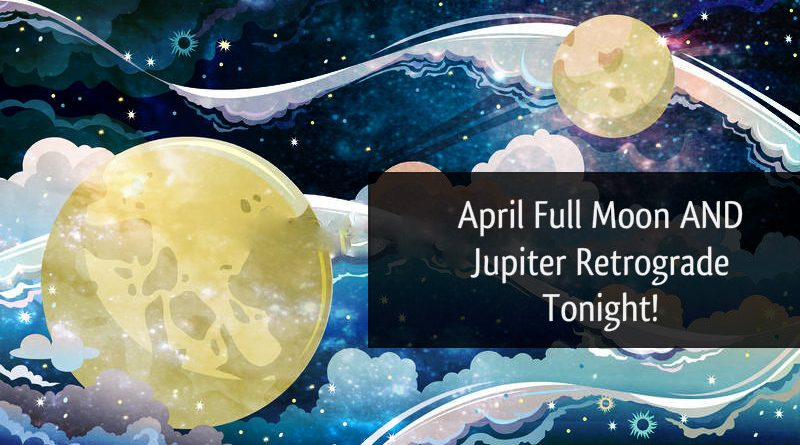 On Sunday, April 29, 2018, a dramatic full moon in Scorpio arrives — while Jupiter is in retrograde. So what does this mean for you?

While each sign is affected differently, there are things we should all know about both occurrences, which was first noted and reported on by Bustle. Let’s start with the Scorpio full moon.

Scorpio, an intense, investigative, water sign, is all about rebirth. Scorpios are wonderful at makeovers and recreating themselves. While they may act emotionally when life knocks them down, a Scorpio always gets back up, rising from the flames. The tarot card that corresponds to Scorpio is the Death card, which while frightening to some, can be a welcome omen of change and rebirth. Scorpios make fabulous detectives and journalists because they’re incredible about sniffing out lies. You can’t b.s. a Scorpio. Full moons, in general, are powerful times of release.

On Sunday, expect the full moon in Scorpio to expose some truths.

Change is scary, it’s normal to hear about secrets getting exposed and assume you’re going to learn your partner is cheating on you, but don’t give into the fear. Rather, use this full moon energy to celebrate a new cycle emerging. Let go of old habits, be that a bad relationship, or fear you’re holding onto within a healthy relationship preventing you from fully enjoying it. The universe wants you to be happy, so let go of any negative emotions holding you back.

Scorpio is all about intimacy and death, so spend Sunday having some one-on-one time with your special someone, as you’re likely to feel empowered to let go of inhibitions. Or, use this full moon energy to reunite with your friends. Grab some red wine, cheese, and chocolates, and enjoy a picnic in a cemetery. If graveyards aren’t your thing, a park will do, but wear all black to enjoy some of this spooky energy — the worst thing you can do during a full moon in Scorpio is cling to thoughts, people, or habits that are no longer serving you, so get ready to surrender.

You may have read that this is a “pink moon,” which doesn’t hold astrological significance, but refers to the name given the April full moon by Native American tribes.

So, what about this Jupiter retrograde?

Well, when any planet is in retrograde, it doesn’t literally change directions but appears to based on the position of relative planets. Retrogrades cause the areas ruled by the planet in question to flip upside down and go all wonky, which is why Mercury retrogrades cause delays in communication, as Mercury rules communication.

Jupiter rules laws, philosophy, progress, and wisdom. It’s also a planet of good fortune. It’s not a retrograde to freak out over, but let’s talk about how to use its energy, shall we?

It’s a philosophizing planet, so Jupiter retrograde coupled with the full moon in Scorpio will have you feeling more introspective than usual. As Jupiter rules fortune, you might have been feeling like the fame and attention you deserve is delayed.

Remember that good things take time, and that Jupiter retrogrades allow us to be a little messy, and that the universe has your best interest in heart; it’s just doing its thing, moving planets and aligning as it’s meant to. Work with energy, not against it, so use the reflective depth of the Jupiter retrograde and Scorpio full moon to allow psychic visions and realizations to come to you. Expect breakthroughs. Be ready to shed your skin, let go of old habits, and patiently trust that in time you’ll get what you’ve been working your butt off for.