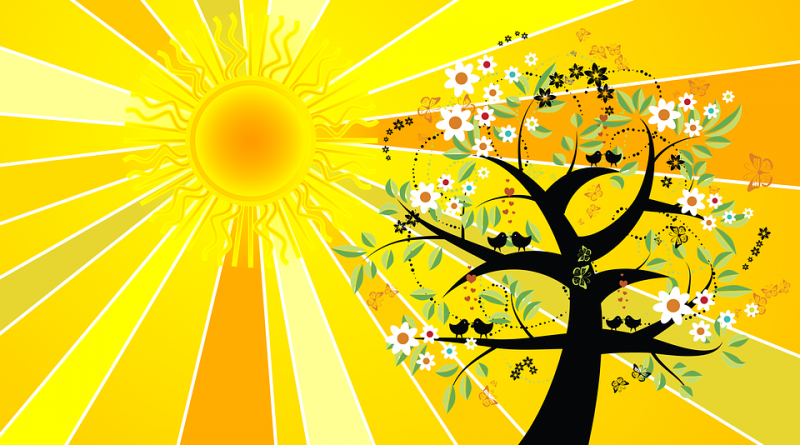 The Summer Solstice is going to bring some big changes to your life, and there is one lesson you really need to learn.

We have two Solstices each year, one in June and the other in December. The Solstice occurs when the Sun appears to be “standing still” which creates either the longest day or the shortest day depending which hemisphere of the world you live in.

With Neptune going retrograde just before the Solstice, it is also our opportunity to think about the reality we have created for ourselves.

According to astrologer and Tao master Sharon Smith, the day will be quiet for Aries. “The summer solstice hits your solar fourth house,” Smith says, “so it’s a good time for a family reunion or that home improvement project you’ve been thinking about.”

As an Aries, you have a reputation for being very ambitious and hardworking. And that’s a good thing. It’s the reason why you find so much success in your career. However, your success in your career also comes at the expense of your relationships. You have to remember that life isn’t always about work. It’s also about building connections with the people around you. So, you have to learn how to balance your work and social life better.

For Taurus, it’s not just the summer solstice that’s significant this year, but the position of the planet Uranus, explains Smith: “Uranus, the planet of sudden change and excitement, moved into Taurus on May 15 after seven years in Aries. If your birthday falls from April 20 to 23, you have an electrical aura around you and excitement and change is in the air.” This event is rare, and it should rev up your engine and amplify your productivity.

Gemini will be highly practical during the summer solstice. “Your mind will be on your bank account and the bottom line,” Smith says. “If you are waking up to new financial needs, get moving on creating more resources.” This will be a time for you to buckle down and realize what is the most beneficial for you. “Watch your tendency to scatter your energy and spread yourself too thin.”

This month, you need to learn that it’s okay for you to burn some bridges. Cut off the people who don’t add any real value to your life.

Go on that vacation that you’ve been thinking about going on for the longest time now. The one lesson that you need to learn as a Cancer is that you need to step outside of your comfort zone if you want to grow and have a fulfilling life.

Timing is everything: Cancer will clearly be in the spotlight during the summer solstice. It is a time for people of this sign to show the world what they’re really made of. “It’s a great moment to make a career move or circulate to meet new contacts, including romantic ones,” Smith advises. “Financial opportunities are there for the taking.” You will feel quite powerful this summer—just keep your ego in check.

As a Leo, you really need to learn that your sense of self-esteem shouldn’t be dependent on the validation of others. You have a tendency of living a life that you think others would approve of. Live life by your own rules and find your own happiness.

Expect to feel spiritually renewed during this time if you’re a Leo. “The summer solstice occurs in your solar twelfth house,” Smith says, “and gives you the energy to connect with yourself spiritually through meditation and self-reflection.” Because people with this sign tend to be gregarious, this spiritual rejuvenation will also enhance your ability to connect well with others.

Lower your expectations. As a Virgo, it is absolutely vital that you take this time to develop a more reasonable and realistic view of the world and of the people in it. You tend to expect too much of yourself and of the people around you and that’s why you always end up feeling disappointed. Learn to lower your expectations and be more reasonable about it.

The fastidious Virgo goes into overdrive during this time of year. “Virgos will find themselves thinking about all the problems that need solutions,” says Smith. The summer solstice will make a Virgo feel like they can take on any challenge.

The absolute biggest lesson that you need to learn as a Libra is that it’s okay for you to be selfish and put yourself first every once in a while. You have a reputation for always being a thoughtful and selfless human being. And that’s good. However, you do it to an extent wherein you neglect your own needs. Keep in mind that there’s nothing wrong with putting yourself first sometimes.

“Career issues will come to a head,” Smith warns, “particularly for early Libras born before September 25. There are challenges on the home front…a new structure wants to emerge.” For Libra, this will be a time of hard work—but if anyone can handle it, it is the even-tempered Libra. The actions you take and how you respond will pay dividends down the road, explains Smith.

Scorpio, you really need to learn to let go of the grudges that you’ve been harboring for so long. You have a tendency to be vindictive especially against those people who haven’t apologized to you. Let it go. You are only bogging yourself down by carrying all of this emotional baggage.

Scorpios will be on fire this summer. There is no better time to create new goals and try new things. “The summer solstice falls in your solar ninth house,” Smith states. “Take advantage of this energy to expand your horizons. Learn the Japanese tea ceremony. Sign up for an African dance class. Go on a pilgrimage. Take a trip into the wilderness.” The world is yours, Scorpio.

As a Sagittarius, you have to learn to face your problems head on. Yes, you are a wanderer and a traveler. You always like to be roaming around because you always like to immerse yourself in unfamiliar situations. But the truth is that you also use these trips and getaways as a means of escaping your problems You need to have more confidence in yourself.

Like Libra, Sagittarius will find the summer solstice to be a time of self-improvement. “Whatever you are doing now is preparation for a kind of debut you will make at the end of the year,” Smith says. “Take one step at a time and be patient while waiting for your ship to come in.” While most people see the summer as a time to kick back, your relaxing time will be delayed by a few months.

The one thing that you need to learn as a Capricorn is that it’s okay to turn your life around no matter how old you might think you are. You should never be afraid to change things up especially if it means that you’re going to end up happier for it. Don’t be afraid to make a few significant changes in your life as you pursue your happiness.

The summer solstice brings about an unusual turn of events for the typically no-nonsense Capricorn. Instead of being ruled by pragmatism, your emotions will surge. “The accent is on your partnerships now,” says Smith. Whether the relationship is romantic or professional, this is the time to explore your feelings and the feelings of others.

Make a better effort to express your love for other people. As an Aquarius, you need to learn that life isn’t all about being smart. It’s also about being able to forge emotional connections with other people. You can’t be so withholding of your feelings if you want to live a full and happy life.

The free-spirited Aquarius may turn a bit more serious, says Smith. “This time of year is all about work for you. If you are feeling hemmed in by your current job (what Aquarius doesn’t?), look around for something that gives you more freedom.” You will be tempted to overwork yourself, but don’t forget about your personal needs.

Pisces, you’re going to have to learn to tone down the paranoia a little bit. As a Pisces, you are prone to believing that everyone you meet is out to get you. You tend to think that everyone in the world wants to hurt you. That isn’t the case. Just because you’ve been hurt in the past doesn’t mean that there is no good in this world. Don’t lose hope in the goodness of people.

Summer is the best time of year for Pisces, and the solstice is the icing on their seasonal cake. “Neptune, your ruler, is in the middle of your sign now,” Smith explains. “[It’s] an amazing opportunity that happens once every 165 years,” she says, and it will last for approximately 14 years. “Take advantage of the creativity and spirituality available to you.”