The only way I’ve ever heard of Gods and Goddesses is through mythological tales and stories. And I’ve always wondered – how do we know what Gods look like? And whenever we see gods in temples or in pictures, they’re always depicted as being fair skinned.

But why is that?

To set about the notion that dark skin can also be lovely, photographer Naresh Nil, along with Bharadwaj Sundar, who own an advertising agency, Slingshot Productions, decided to conceptualise a photoshoot that comes with one single message – Dark Is Divine.

Depicting images of Lakshmi, Durga, Saraswati, Sita, Shiva, Krishna, and Bala Murugan, the duo have managed to create stunning illusions, reflective of the strength and the divinity of the Gods and Goddesses.

Take a look for yourself. 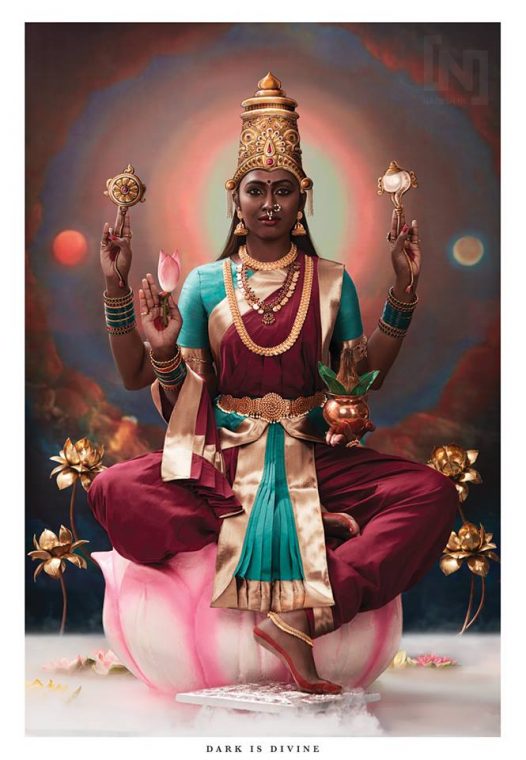 The beauty of Goddess Lakshmi is resplendent as the sun, with her lustre like fire and radiance like gold. She brings material and spiritual prosperity to those who invoke her grace. 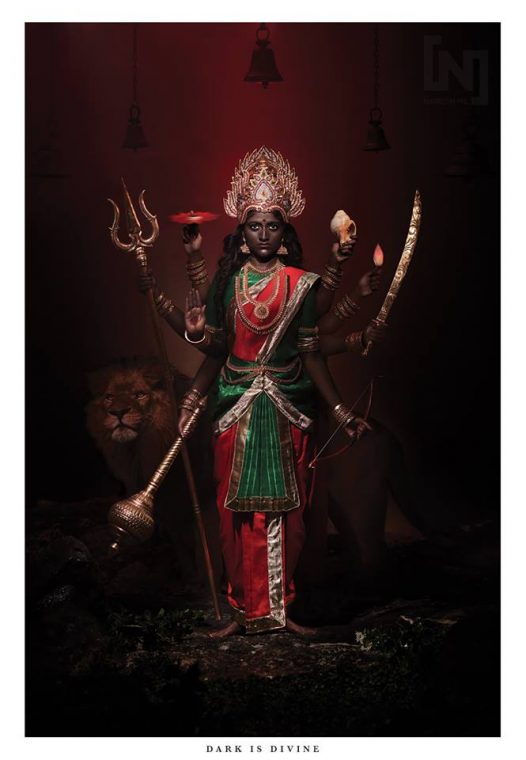 Goddess Durga, the supreme power. She has been depicted here as dark skinned and looking resplendent as she restores peace and harmony in the universe. 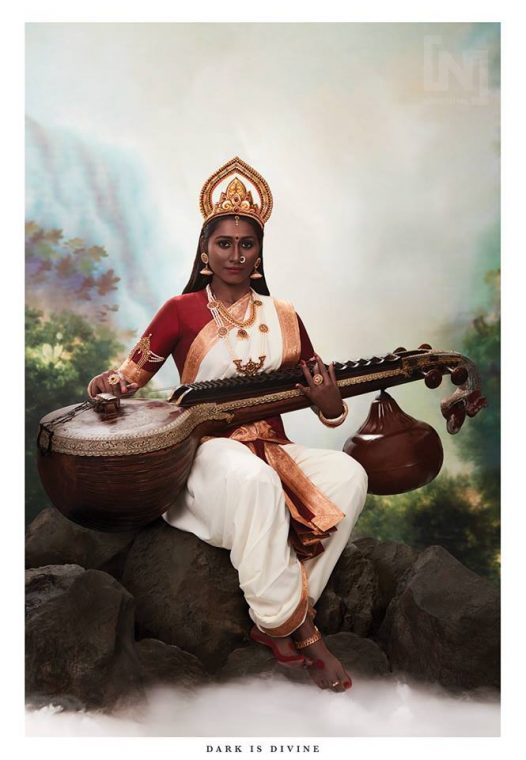 Goddess Saraswati’s purity is as boundless as the knowledge she bestows on the world. Her lustre is divine in all her forms and her grace guides mortals to attain consciousness, cosmic knowledge and moksha. 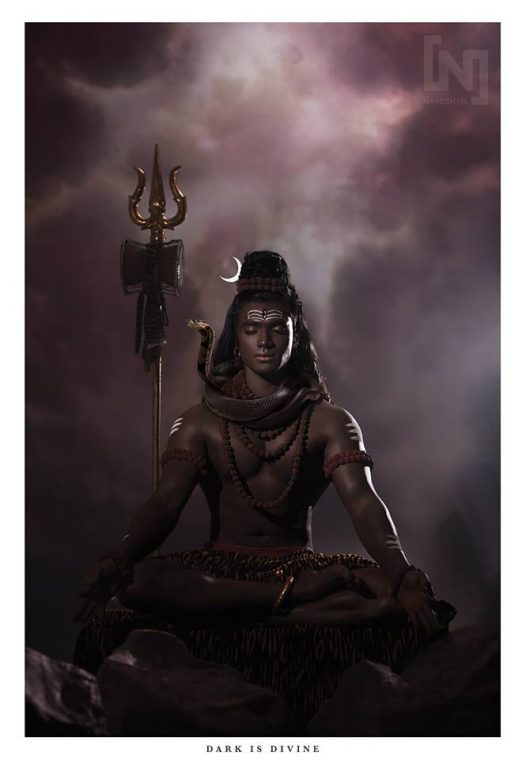 Lord Shiva is boundless, with no beginning or end. He is revered in various forms, colours and names, and here he has been depicted as dark-skinned, deep in samadhi, in his transcendental, all-embracing form 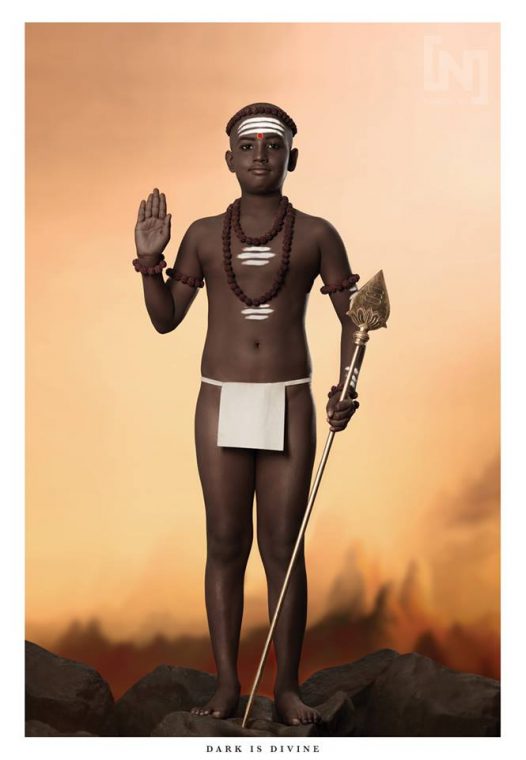 Bala Murugan is a form of Lord Subrahmanya, depicted here in his assumed form as a young recluse, dressed modestly, without fineries and shorn off his looks. Shown as dark-skinned, his serenity is reflected through his being. 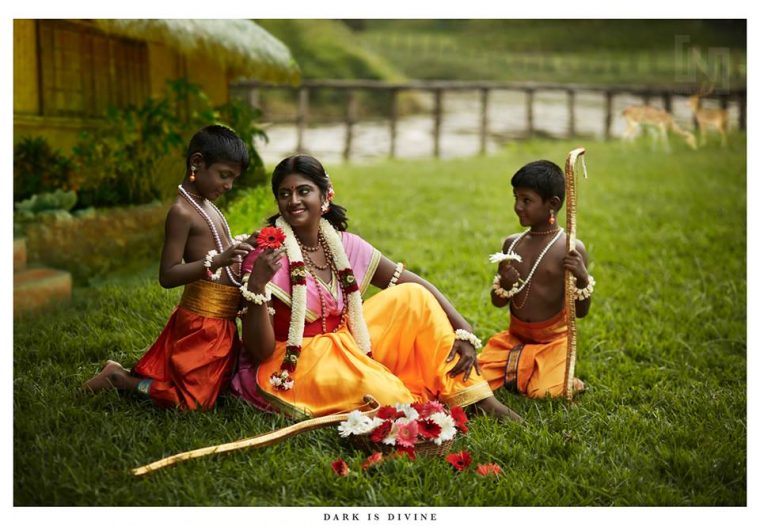 This incredibly pleasing and divine depiction of Mother Sita, with her children, Lava and Kusha shows the three surrounded by peace and tranquility, with the love of the Mother towards her children and their adoration for her shining through. 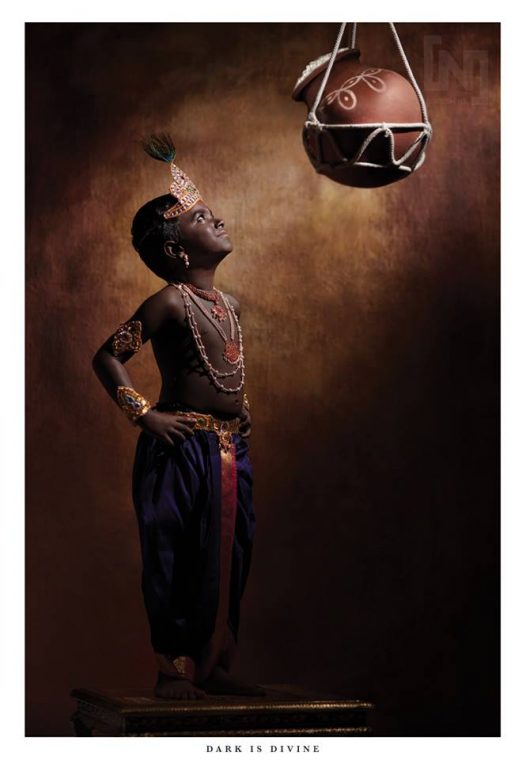 With the entire universe residing within him, Bala Krishna is depicted as dark-skinned here, with his innocence and playfulness shining through as he looks towards the pot of butter. His leelas are divine and he is beautiful in all his forms.

Theoretically speaking, none of our epics or religious texts are codified, meaning that there is no one version or interpretation that’s considered the universally accepted one. Each state, and sometimes each community, has its own version of our Gods and Goddesses. And so, how a God or Goddess looks is entirely subjective.

The best part of these photos is that you look past the colour of their skins and only the divinity shines through.

Being Indian contacted photographer Naresh Nil and here’s what he told us about this really intriguing photoshoot:

“By showcasing the divine as dark-skinned, we wanted to bring to life the beauty of divinity in another form for people to see. It came from a casual chat that I was having with my friend, Bharadwaj Sundar. Later we started to detail it before going ahead to shoot it. We shot models who were comfortable in presenting and associating themselves with the representation of and expression through dark/dusky skin.”

The series was posted to Facebook on December 29, and since then, it has received over 4,000 shares. When asked about the responses they’ve received, Naresh Nil said that people have lauded them for the series and would also like to put up prints from the series in their prayer rooms, which was the part that touched the creators the most.

We’re glad that, in an age where people are still chasing unrealistic and toxic beauty standards, someone is choosing to break the status quo to remind us that beauty exists in all shapes, forms, and skin colours, and perhaps, if we looked past the exterior, we might see the divinity within.