Signs of good fortune have been established in Hindu mythology since ancient times. Tibetan Buddhism has a group of eight symbols that are considered to be the oldest and most well known. These eight symbols include the Golden Fish, the Parasol, the Run, the Lotus Flower, the Conch Shell, the Infinite Knot, the Wheel, and the Flag. 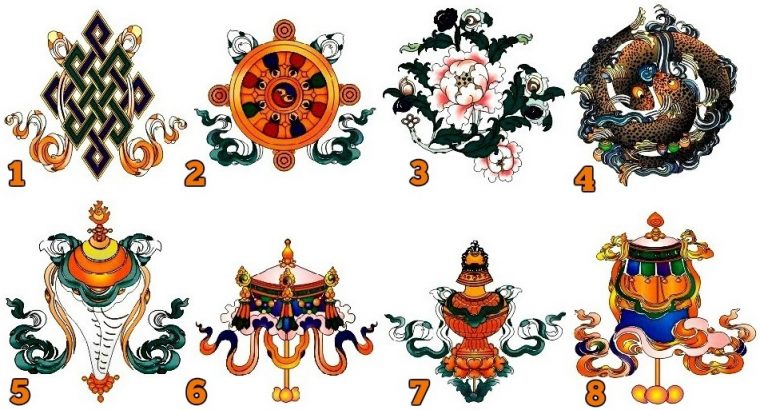 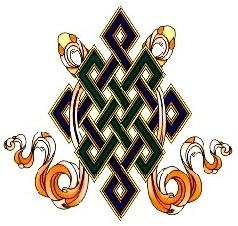 Dharma is continuous and inexorable, while Time is but an illusion. The Knot of Infinity symbolizes that truth. The search for enlightenment need not mean giving up worldly responsibilities. The Knot is a representation of the Buddha’s teaching that religious thought and material life are intertwined.

The Infinite Knot is a line without a beginning or end that radiates both calm and movement. It represents the idea that everything in this world in interconnected.

It is also symbolic of the Buddha’s infinite compassion. Originally, this symbol was associated with Vishnu and his abiding love for his consort Lakshmi, goddess of wealth. You can find the endless knot symbol on various inspirational products such as endless knot pendant, endless knot decor and more. 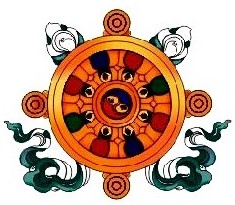 The eight-spoke wheel Dharmachakra (chos kyi in Tibetan), also known as the Wheel of Law is among the oldest and best known of Buddhist symbols, going back to the time of the great Buddhist king Asoka in India.

The wheel in its entirety encapsulates the Buddha’s teaching. Its eight spokes represent the Buddha’s Noble Eightfold Path, which leads to the spiritual enlightenment of all sentient beings. The circular shape invokes the idea of perfection – following the path of dharma is the best way out of the endless cycle of samsara. The hub of a wheel is its focal point. Here, it stands for inner discipline which is the essence of meditation practice. The rim of the wheel connects the spokes and holds together the entire structure. This is mindfulness (Samadhi) or ‘living in the moment’ a cornerstone of Buddhist teachings.

The forward motion of the wheel points to the spread of the Buddha’s doctrine. Ever since Sakyamuni expounded on his doctrine of enlightenment, the Wheel of Dharma has never stopped rolling, from India through virtually all of Asia and in modern times, the West as well. Many Asian countries have incorporated the Dharmachakra into their national flags. 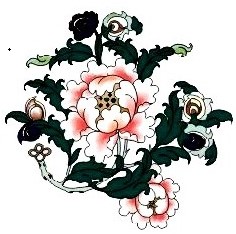 The lotus is called padma in both Sanskrit and Tibetan. Rooted in muddy slime, the lotus rises through water to emerge into the sun, a progress that mirrors the journey of man’s soul. Mired in suffering and sin, we pass through varied experiences before emerging into the sun of enlightenment. Many plants grow above water; it is only the lotus whose sturdy stem allows it to clear the water surface and stand steadfast.

It is said that our hearts are like the closed petals of a lotus. Imbibing Buddhist virtues will enable the lotus to blossom into its full beauty. This is why the Buddha is often depicted seated on a lotus.

The white lotus represents purity of mind and an evolved spirit. The pink lotus is matchless in its perfection and therefore emblematic of the Buddha himself. A blue lotus is symbolic of the spirit’s conquest of the senses, while a red bloom is associated with Avalokiteshwara, the Compassionate One. 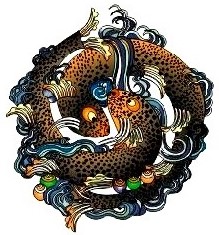 As human beings, we must live through samsara, or the endless cycle of birth, death and rebirth that entails suffering at every stage. The Buddha’s teachings set us on the path to liberation from samsara; the golden fish is a symbol of that liberation, a creature of joy, at one in its element, living a life of spontaneity with no pain or fear of perishing in self-created suffering.

The fish symbol is significant in Hinduism, Jainism and Christianity. In Buddhism, the fish also represents fertility and plenitude. It is often beautifully depicted as a carp, which in Asia is considered sacred because of its elegance, size and long lifespan.

Essentially, the golden fish is an aspirational symbol, teaching man that the spiritual bliss which lies beyond samsara is infinitely more beautiful than anything he can experience in earthly life. 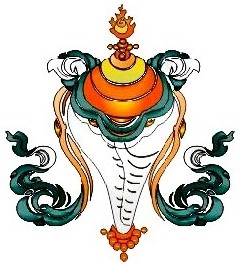 A right-spiraled conch is a rare find and is considered sacred in Buddhism. Its direction is thought to be consonance with the movement of celestial bodies in the universe. Curiously, the whorls of hair on the Buddha’s head are right-directional; so is his body hair and the curl between his eyebrows. His navel too, is shaped like the right turning conch shell.

Today, the conch is used as a summons to prayer. During rituals, it is used to hold holy water and as a musical instrument.

The conch proclaims the widespread influence and sovereignty of Buddha’s teachings. It is emblematic of great spiritual power and its resonance is thought to cast out evil spirits. 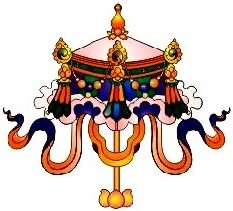 In nature, the dome of the sky arches above the mountain. The parasol in Buddhism is symbolically a device which casts a shadow, and therefore, offers protection from heat. Also, in Indian mythology, the parasol has traditionally been associated with royalty. Held above the head, it conveys honor and reverence, and hence the Buddha is often depicted sitting under a decorative parasol.

The concept of the parasol providing shelter from the sun’s heat translates into the Buddha’s teachings protecting us from the “heat” of negative forces like greed, lust and suffering, obstacles in the path of the spirit’s journey towards enlightenment.

The Tibetan parasol is inspired both by Indian and Chinese designs used by royalty. Its wooden spoke is topped by a dome-shaped cover, with a silky “skirt” hanging from the rim. The dome represents wisdom and the skirt, compassion, both of these being essential Buddhist values. 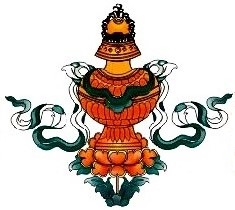 The urn closely resembles the round-bellied, slim-necked kalash of Hinduism. A large jewel on top gives the urn its other name, the Vase of Treasure. The urn is symbolic of limitless wealth.

Traditionally, Buddhist treasure vases are filled with sacred materials and placed upon altars. They are buried near springs and mountain passes in the belief that they are conducive to a harmonious environment. It is believed that their presence attracts wealth.

Of greater significance is that the urn represents the abundant spiritual wealth of the Buddha. No matter how much he gives away, more will always be forthcoming. 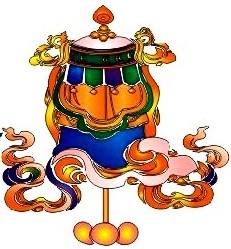 In Hindu mythology the flag or Banner of Victory is often featured as a military standard. In Buddhism, it is emblematic of the conquest of ignorance.

It is also symbolic of the Buddha’s triumph over the four Maras, or obstacles on the path to enlightenment. These are passion, greed, emotional degradation and the fear of death. To achieve enlightenment, all sentient beings must conquer these hurdles.

Traditionally, cylindrical banners made of beaten copper are placed at the four corners of Buddhist temples. They point to the spread of Buddhist doctrine in four directions and the Buddha’s victory over the Maras.