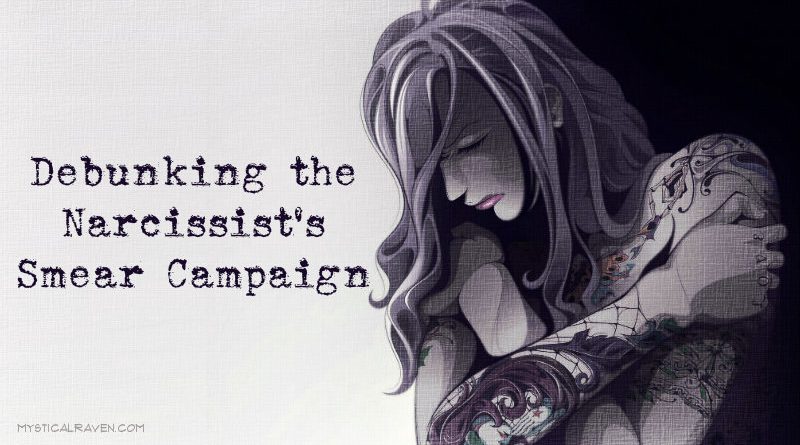 When we dump a narcissist or a narcissist dumps us, one of the first things that they do (to make themselves feel better) is embark on a smear campaign.

Somehow, running a smear campaign provides the narcissist justification as to why we were never worthy of their presence to begin with. By talking smack around town about the discarded partner…by getting “the word out” about how horrible the ex is…the N feels pumped up and vindicated about however the relationship came to an end.

Most of us who’ve been involved with a narcissist have experienced being the target of a smear campaign at one time or another. It might even be that, with a break-up on the horizon, you’re worried in advance of what you already know will certainly be one. After all, breaking up with a narcissist isn’t exactly like any other break-up or divorce on the planet.

If there are mutual friends, co-workers, or children involved, there will always be radioactive fallout but it’s not nearly as scary as it appears to be. In fact, by making one amazingly simple switch within our reaction to it, we can all but instantly change the dynamic of the smear itself. The key, my friends, is to say NOTHING at all…not a single world…and, believe me, there will be power in your silence.

Naturally, when someone is talking shit about us to others, our first reaction is to want to defend ourselves. In many situations, of course, defending ourselves is the right thing to do but when the person talking smack about us is our narcissistic ex, I have found that silence on our part is the absolute – and only – way to beat him at his own game. In fact, I discovered that our silence during the smear campaign exposes him for the asshole that he really is. Our silence actually creates plausible denial in the smear, ultimately causing the truth to prevail.

The fact is that WE DON’T HAVE TO DEFEND OURSELVES AGAINST DOUCHEBAGS. We just don’t. The fact is that a narcissist will talk bad about us to everyone anyway– his family, our family, our kids, mutual friends, co-workers – and there’s not a whole lot we can do about it. The smear campaign is one of the oldest narcissistic tricks in the book. Sure, we can run around behind him doing damage control or talking smack back but we’re dealing with a narcissist here and he will use our defensive reaction as proof that we are exactly as he describes. This is what he is counting on. This is, in fact, a narcissist’s end game throughout the entire relationship!

I’m here to tell you that, throughout all of the N’s smearing during and after the relationship, all we ever have to do is be quiet and be normal and the N will quickly end up looking like they are. This strategy works, by the way, even with narcissists that are well liked and even loved in the community. It always works.

Because in the end, the truth really does prevail and our silence allows it to happen. People aren’t stupid and not everyone buys into the narcissist’s shit. We only think they do because we’re the target.