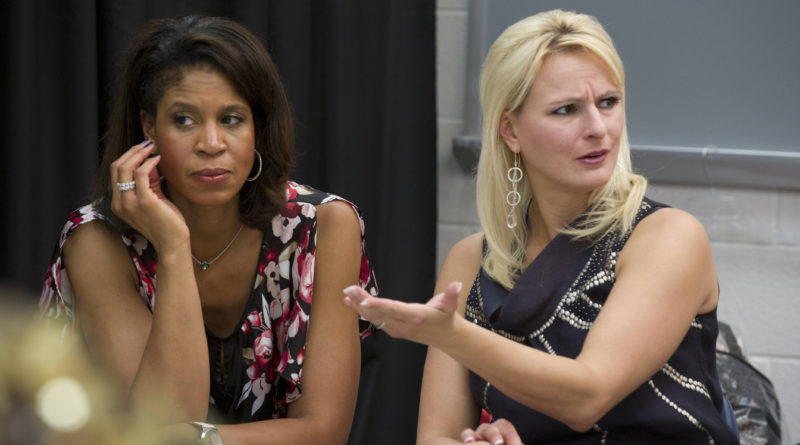 Marie Claire recently published an article, “The Rise of Mean Moms,” and it’s all too real for many mothers. Unfortunately, mean moms are on the rise, and we have all either felt the backlash at some point, or even been a part of the mean mom tribe.

Marie Claire paints a very accurate picture of what it feels like to be bullied by a mean mom: “She criticizes your parenting style, calls you out on Facebook or slathers you in snark. These are the mean girls, all grown up and blossomed into adult bullies with kids of their own. You’ve probably encountered a few at your local playground. Hell, maybe you are one.”

“Mean girl” behavior does not end after high school or college; nope, it sticks with us through motherhood and beyond.

Why has this become so rampant in today’s society? It almost feels like a trendy sport where you are supposed to either play or be played. Is it social media? We all know as soon as you post that picture of your child playing or your anniversary party, you are automatically being judged; women seem to feel the need to measure up, and they are doing it by tearing each other down.

While we all feel pressure and want what’s best for our kids, has this behavior reached new heights because it is so much easier to hide behind a screen, get up on your soapbox and somehow try to lift yourself up out of your frustrated state by criticizing someone else? So now, not only are you getting the side-eye for not buying organic in the grocery store, if you post a picture of you and your kids enjoying some fast food for dinner, you have just opened yourself up to a whole other place to be judged by opinionated, perfect mothers. But why are so many feeling like this is acceptable behavior?

Marie Claire reports: “The fact that ‘Mean Girls’ came out in 2004, when today’s young moms were in high school or college, is not a coincidence. Art, too, imitates life. Tina Fey was inspired to write the script after reading the 2002 non-fiction book ‘Queen Bees and Wannabes‘ by Rosalind Wiseman, in which the writer observed ‘the tiny ways that girls go after each other.’ Bullying research during this time found that girls can be aggressive—not in the obvious, physical way boys can be, but in subtler, more indirect ways. Countless articles and news segments at the start of the 21st century focused on the new phenomenon of female bullies, dissecting the idea that girls are socially competitive creatures striving to be popular and powerful—and victimizing others in the process.”

It seems to many that becoming happy and successful equals grabbing others by the collar and trying to hold them back.

According to a survey done by Beech-Nut baby food brand, 80 percent of millennial moms have experienced some type of shaming.

I sat down to talk to a few of my favorite moms about their experiences with mean moms, and this is what they told me:

“A picture of my son playing in the muddy rainwater was picked up by by my local news’s Instagram account as something cute but was ripped to shreds. People said I was abusive, neglectful and disgusting. And I should take him to the ER for a tetanus shot,” says Brenda, a mother of two from California. “I felt like it it took the joy out of something my son found such happiness in.”

Sarah, a mother of two from NYC explains, “I feel the need to keep up with the other santicmommies as far as eating the right foods, doing the right activities, behaving the right way on the playgrounds, etc. Santicmommyhood subtly creeps into your subconscious life until you are living that life, even if you don’t realize or intend to.”

Another NYC mom, Olivia, mother of one, described something very similar after being asked if she felt she’s ever been bullied or shamed, “Not so much bullied as ostracized,” she said. ” Other moms look you up and down.” She went on to explain she felt very judged just by holding a playdate at her house, “The worst was having other moms over with their kids and then not having it recripicated because they saw your digs. I had a two-bedroom apartment at the time.”

Tiffany, a mother of two from Texas had a recent falling out with a friend, “The first thing she did was attack my mothering. When you want to hurt a woman, you go for the jugular.”

All of these woman told the same thing after sharing their stories: they were hurt at first, but now are so used to being judged, bullied or ostracized, it hardly fazes them anymore.

While it seems like mean mom behavior may be here to stay, we would all benefit from looking at the bigger picture and putting our energy into helping each other. We are all in this together; no one is nailing it every day. And before we spew from the mouth with mean, judgmental comments, we need to stop and take a second to realize maybe we are overwhelmed, exhausted and overworked, and that may be the reason we feel so ready to take down a fellow mom who is probably feeling the same way.