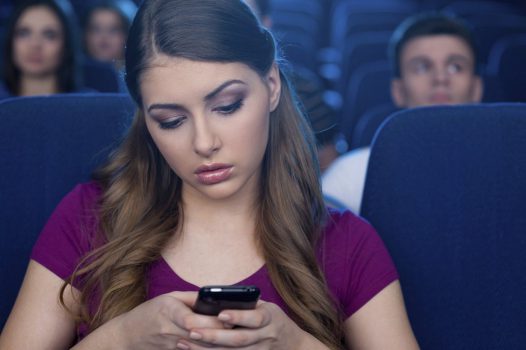 We all know that texting or being on the phone during a movie it not only rude but obnoxious. The light from the screen bothers all the people sitting behind and demonstrates to whoever the person is with that they wish they were somewhere else. Not being able to put the phone away for a two-hour movie is not only a sign of smartphone addiction, it demonstrates someone’s lack of attention span.

One Austin man is hoping to make these people suffer. And he is starting with his date who refused to stop texting during the movie. He is filing a lawsuit and breaking legal ground in a strange way.

Because 37-year-old Brandon Clarke Vezmar’s date refused to stop texting during a movie he paid for, the pair was kicked out of the theater. Now Vezmar is suing her for the amount paid for the movie tickets, claiming they are damages.

In the lawsuit that Vezmar filed on May 6, he claims that he paid for the movie tickets and the date activated her phone and checked text messages 15-20 times during the first fifteen minutes of the movie.

Vezmar’s lawsuit says texting is “in direct violation of the theater’s policy, adversly affecting the viewing experience of [Vezmar] and others.”

“While damages sought are modest,” the lawsuit reads, “the principle is important as Defendant’s behavior is a threat to civilized society.”

Vezmar and his date were watching “Guardians of the Galaxy: Vol. 2”. Apparently, the new movie did not capture his date’s attention for very long. She was unable to stay in the moment and watch the popular flick.

“It was kind of a first date from hell,” Vezmar said. “This is like one of my biggest pet peeves.”

The date did not know that Vezmar filed a lawsuit against her until reporters began calling her on Tuesday. When she finally learned that she was being sued for damages, she said, “Oh my God, this is crazy. I had my phone low and I wasn’t bothering anybody. It wasn’t like constant texting,.”

Because he was offended that she did not get off her phone, he first sent her a text message asking his bad date to reimburse him for the expenses.

“Your behavior Saturday was not only rude, it cost me money,” he wrote in a text to the bad date. He then asked her to reimburse him. If she didn’t he threatened to file a lawsuit. “Will you do this or will I have to pursue the money in small claims court?”

In response, she tried to play it off as an innocent mistake. She wrote back:

“Are you serious? My best friend needed me right away and you said my phone was driving you crazy then I felt so uncomfortable. I can’t believe you would take this as far as going to court. This is insane.”

He wrote back, “Yes, I’m absolutely serious. You’re out of line.”

Do you think he is going too far? Or should she learn her lesson?