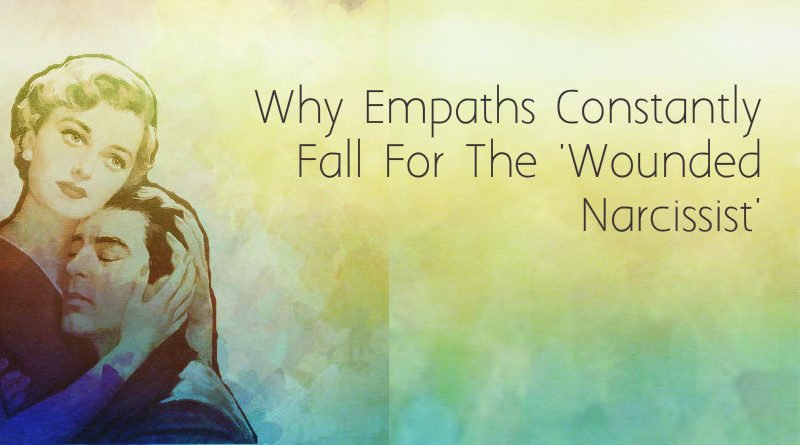 Some believe that the narcissist has come from a place of pain, that he or she has been subjected to unimaginable pain and as a result, they have taken on  a certain set of behaviours in order to deal with their past.  Many people have been subjected to abuse and yet have found strength within themselves to not let their past dictate their future.

Over valuing as a child

The cause is most likely complex with the possibility of more than one factor being at the root of this disorder.

Let us take a look at when the ‘wounded’ narcissist meets an empathetic person.

An empath is a giver who wants to help.  They take on another’s pain and internalise it.  They are full of compassion believing in the good of humankind.  They have the ability to put themselves in another’s shoes and try to make things better often at the expense of their own wellbeing.  On the other hand, the narcissist is a taker, sucking others dry for their own benefit and to hell with the consequences or who may suffer as a result (as long as it’s not them).  It may be a match made in heaven for the narcissist but it’s a match made in hell for the empath.

Empaths tend to think that people are inherently good failing to see that there are some people who don’t possess such qualities as empathy and kindness.  It’s hard for them to realise that some people are out for what they can get with absolutely no good intentions whatsoever.  They fail to set boundaries as to what is acceptable and what is not.  A narcissist will seize this opportunity to take advantage of their kind and forgiving nature.   Their aim will be to exploit and manipulate the empath by any means necessary.

The narcissist has mastered the art of deception and will employ well practised devious and underhand methods to exert their influence whereby they will eventually gain control not only of their targets mind but virtually their every move.  This type of psychological abuse is a gradual process whereby the person being targeted has absolutely no idea that such wheels have been set in motion.  Their objective has been to love, to help and to soothe the pain that the narcissist has so convincingly made them believe has been a part of their past.  Let us not forget that narcissists are pathological liars often portraying themselves as the victim where the opposite is true and they are, in fact, the perpetrator.

Can these two personalities find an equilibrium?  That, I’m afraid is highly unlikely.  Over time the target of this insidious abuse will get worn down.  Just like a carpet that gets constantly trod on, its’ once beauty and soft touch are now lacklustre and barren of fibre.  They will get fed up with constantly being blamed when things don’t run smoothly.  They’ll get fed up with being the only one fighting for this relationship.

Sometimes this process takes years but eventually most realise that there is a point of no return.  It’s either sink or swim.  As a captain of a ship performs his last duty by ensuring the safety of the passengers and crew before saving himself, the person seeking freedom ensures the safety of their children and loved ones, before jumping overboard and swimming for the shore.  Some may think that they can remain on-board and hope that the ship will remain afloat but often the damage is too severe that sailing on to the sunset is not an option.

Abandoning ship is not failure.  It’s not defeat.  It’s taking positive steps to overcome a situation that has become unsustainable.  Remaining in an unhealthy relationship with such a toxic personality is likened to signing your own death warrant.  Psychological abuse takes its toll on your health, not only your mental health but your physical health.  It’s not selfish to take over the reins and start looking after yourself.  You have a choice, to stay and be subjected to more of the same or give yourself a new start, a new life free from mind games and control.  The choice is yours and the journey ahead will be rough at times but worth it.  Calm seas never made a good sailor.

For those dealing with family members who display this type of behaviour, the advice by experts is the same.  Distance yourself from the dysfunctional personality in order to gain peace and normality in your life.

Written by Anne McCrea for NarcissisticAndEmotionalAbuse