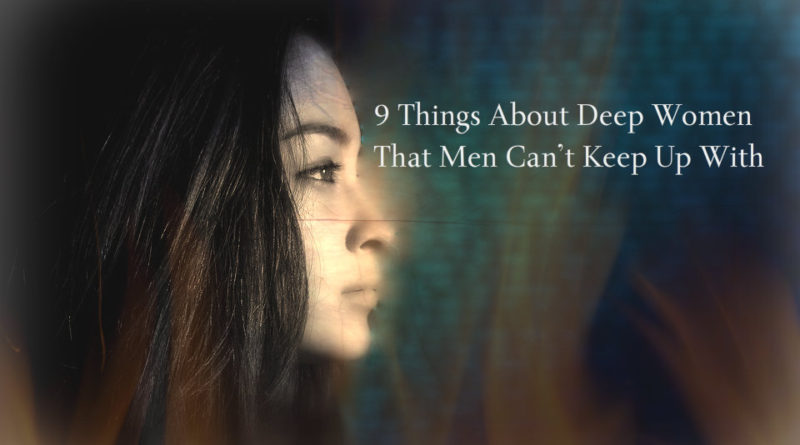 So what is it about these kind of women that repel weak men? Let’s count the ways, shall we?

It’s a shame really. We live in the 21st century and yet the stigma of strong women still exists. The traditional-minded men are still intimidated by smart and independent women who can establish dominance in a relationship. The liberated nature of a strong and independent woman may prove to be too unsettling for most men. When women carry themselves with an air of intelligence, depth, and class, it can be intimidating for men who aren’t so sure of their own personal capabilities. It’s not the woman’s fault though. Society is going to have to adjust to her. This is the age of the new woman who is just as smart, and who should have just as many opportunities as men to find personal success.

These women have to be patient with love. They deserve a high-class man and they might have to wait a long time before they come across one. A strong man who isn’t insecure about dating a strong women can be a rare find these days. So what is it about these kind of women that repel weak men? Let’s count the ways, shall we? Here are the 10 things about deep women that men can’t keep up with.

1. A deep woman is brutally honest.

She won’t ever be shy about expressing her opinion. She is a very profound and educated person who can develop well-rounded opinions about everything. Sometimes, a man will be on the receiving end of her criticisms and his ego may not be able to handle it. She can be a little brutal with her honesty sometimes and some men won’t be able to tolerate that kind of frankness.

A conniving man can’t pull a quick one over a deep woman. She can see right through him and his intentions. A deep woman is meditative and reflective and she always knows when she’s being played. Men who have the tendency to belittle women with their lies and deceit will find themselves unable to victimize deep women. A deep woman isn’t gullible and some men don’t like that.

3. A deep woman only gets into serious relationships.

Everything is serious when it comes to a deep woman. If she gets into a relationship, it has to be the kind of relationship that has a serious shot for the future. She’s not interested in flings or random hook-ups because she thinks that those are a waste of time and emotional space. She’s only looking for men who are willing to settle down and get serious about relationships. For men who are looking for a cheap and random hook-up, you got to start looking elsewhere.

4. A deep woman is incredibly selective about who she dates.

She’s not just going to date any man. She’s well-educated, she’s reflective, and she’s an intellectual. She craves for mental and emotional stimulation on a high level, and not all men will be able to meet her standards. She wants a hardworking man who is goal-driven and is able to support her own personal goals as well. Dating a lazy and uninspired man (the kind that composes a vast majority of the male population) is just out of the question.

5. A deep woman may be too intense for weak men.

Everything is just always magnified and intensified when it comes to a deep woman. Her thoughts are more intense, her opinions are more hard-hitting, and this may turn off a vast majority of men. She may come off as a little overbearing and overwhelming to most people and it may turn them off to the idea of dating her.

6. A deep woman doesn’t shy away from intimacy.

A deep woman is someone who is very in touch with her feelings and emotions. She is also very confident in the expression of her emotions in intimate manners. If a man is uncomfortable with intense expressions of intimacy, then he wouldn’t want to date a deep woman.

A deep woman is very passionate about everything that she does. She always puts her heart and soul into things because everything she does is of utmost importance. She has no interest in engaging in activities that offer no value to anyone’s life. If she does anything, you can be sure that it’s something that’s important her. Some men find this level of passion to be off-putting.

8. A deep woman has little patience

A deep woman will waste no time picking up after her man. If she does get into the dating scene, it has to be with a man who doesn’t need babying. She doesn’t want to have to put her life on pause just to wait for a man to catch up with her.

If a weak man is faced with a difficult question, it can be very daunting. For the most part, a deep woman always asks very difficult (and sometimes confrontational) questions often. If a man can’t take the heat, then he shouldn’t even try.