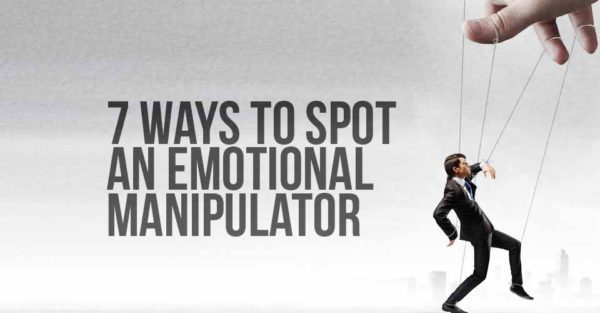 Emotional manipulation is something we have all experienced, even if you haven’t recognized it for what it is. People who play the victim, who make you feel guilty or ashamed for no reason, and those who twist their words (and yours) are perfect examples of emotional manipulation.
Buy an “Intelligence is sexy” t-shirt!

I’ve come across a lot of these types of people in my life, and I think it’s important to identify this behaviour as early as possible in your relationships. I’ve also come across people who are completely oblivious to the fact they are being manipulated, and therefore are unprepared to defend themselves against these types of attacks.

I’m going to tell you how to spot emotionally manipulative behaviour, and once you recognize it, you can stop letting it have so much power over your happiness and your life.

THEY MAKE YOU APOLOGIZE FOR THEIR PROBLEMS.

Whether it is a pathetic excuse as to why they were late, why they are constantly broke, or why they forgot your birthday, an emotional manipulator will twist things around until you feel responsible for their problems.

They will say that they “did this” or “didn’t do that” because they are going through something and didn’t want to burden you with their problems. Maybe they’ll follow it up with “because you are always so busy” or “because you have your own things to deal with.” Whatever words they choose to use, it is important to notice what is really going on here.
“Gaslighting”: One of the Most Dangerous Forms of Mental Manipulation We All Deal With

First, their excuses will sound either a bit too dramatic, or like total bullshit.
Then, they close their statement with a guilt-induced remark which probably makes you feel like you are the one who should apologize.

“I’m sorry I was late to work, I’ve been having these terrible headaches. I should have told you about the awful pain I’ve been experiencing. I was looking for aspirin or anything really…but you’re right, I should have taken the time to phone during my migraine.”

Ugh. Do not  apologize for expecting someone to be responsible for their own actions. Do not allow them to manipulate your emotions like that. In the situation above, you can be sorry that they are having headaches, but remind them they still need to be on time. You can be firm without being confrontational.

THEY ARE THE PERPETUAL VICTIM.

This sign of emotional manipulation ties in heavily with the aforementioned one. In the example used above, the person is clearly playing the victim. This type of emotional manipulation plays on your sympathy; they make you feel like you must support them, care for and nurture them. They rarely fight their own fights and will look to you to take care of their dirty work.

With perpetual victims, you simply remind them that you have the utmost confidence in their abilities to take care of themselves. Either their ego will agree and they happily shuffle off (unlikely), or they will continue to try and drag you into their theater- which is when you walk away and leave them to their drama-fest.
10 Tips That Will Help You Avoid Emotional Manipulation

THEY SAY ONE THING AND DO ANOTHER.

You’ve heard that actions speak louder than words, and it’s true. Emotional manipulators aren’t good with actions, so they say a lot of words to accomplish the things that actions word normally do- show support, instill trust, show reliability. But more often than not, all those words will let you down because there is never any follow-through.

Let’s say you are ready to look for a new job. You ask your partner if they will support your decision, and they respond with, “Of course! I will always support you.” Now, you’re ready to go to your interview but the car is gone. Hmm… I guess they took it this morning. Funny, because you know you told them about your appointment. When you ask an emotional manipulator for anything, even support, you will only be disappointed.

You can confront this type of behaviour but I’ve found it only leads to more manipulation. For example, the emotional manipulator in this situation knows they have hindered you from something you wanted/needed to do. If you were to call them out on knowingly taking the car when you had an interview, you would probably be told something like, “I support you but I also have things to do- life doesn’t just stop because you have an interview.” It’s best to avoid asking these types of people for anything- full stop.

THEY LIE, LIE, AND LIE AGAIN.

If you are familiar with the term “crazy-making”, then you know the type of lie I am talking about. Someone who says something, and then later denies ever saying such a thing- that’s crazy-making. And emotional manipulators are pros at this.

It can be something as minor as saying they will take out the trash, or as major as saying they will pay for your fall semester. When confronted, you can be assured they never said that. It is that lying- that emotional fuckery- that really can make you feel crazy. In fact, they can lie so smoothly, so convincingly, that you may very well start to doubt yourself and question what really happened. This type of emotional manipulation is very dangerous because it can literally mess with your sense of reality.

There are two direct ways to handle this: 1) carry a pen and paper with you so the other person can see you writing down what they are saying when they say it, or 2) voice record them with your phone. The visual act of seeing someone write down what you are saying is unsettling if you are an emotional manipulator, and this might help to keep them a bit more honest. Personally, I had to employ a voice recorder when confronting my emotional manipulator. The fact I had written anything down had no meaning to the other person, but when they heard their own voice say the words they were vehemently denying saying, their tune changed a bit. Honestly, if you get to a point in any friendship/relationship where you need to start writing down or recording things just to keep your sanity, it’s best to walk away and quickly.

THEY THINK EVERYTHING IS A COMPETITION.

“Oh, your car broke down? Well that’s not nearly as bad as what happened to me yesterday…”
If you have a problem, they have a bigger problem. Emotional manipulators thrive on drama- so much so, that they help create a lot of it. They revile in the spotlight, and if you try to bring the focus back on yourself, you are likely to suffer their wrath.

It’s not just the negative and problematic side of things that they are competitive with. Start telling the girls at work about something romantic your husband did, and the emotional manipulator will interject with something preposterously incredible that her husband did. Oh, and did she mention that he is also a volunteer fire-fighter who adopts injured kittens and is heading to Africa to put an end to world hunger? Also, he’s best friends with Jesus.

Let them have their spotlight tales. Either get comfortable with the fact that this will probably always happen, or walk away. Bringing the focus back to yourself will only give the manipulator another chance to play the victim.

THEY ASK FOR THINGS THEY KNOW YOU WILL SAY YES TO.

You are more likely to say yes to the second proposal because you said no to the first. That’s psych 101. The only way to handle this is to say no, and mean it. After they realize they can’t manipulate you into always saying yes, they will stop asking you for favours.

THEY WILL MAKE YOU THINK YOU CAN TRUST THEM, BECAUSE “THEY TRUST YOU”.

When one first meets an emotional manipulator, you might not immediately notice their shifty ways. Eventually, they will open up to you by either sharing a tragic story or deeply personal information. This type of behaviour is meant to suck you in and make you feel like “wow, this person really trusts me with this.” They want to make you see them as vulnerable, which is the last thing they are. Once they’ve got your sympathy and attention, they’re all set to move on to another tactic.

Do not fall for this. Your trust should be earned by displaying respectable behaviour and genuine emotional connections, not by some story that may-or-may-not have any merit told by a manipulative jerkwad.

With all of these tactics, you see the emotional manipulator toys with your feelings- employing guilt, sympathy, resentment, confusion, and negativity to their aid. As I stated before, emotional manipulation is dangerous. Anyone who can control how you feel, and when you feel that way, has a lot of power over you and your happiness.

I know that not everyone is as comfortable with confrontation as I am. So, I know that my advice isn’t going to suit every person for every situation. My personal experience has taught me to avoid emotional manipulators whenever possible- I simply don’t have the energy to feed into their bullshit any longer. The best thing you can do is walk away from any behaviour or attitude that doesn’t serve you. But, occasionally, it’s not a bad idea to tell someone that they are being a manipulative asshole and you are onto them.

Protect yourself from these types of people by paying attention to how you feel and what triggers emotional changes within you. If you notice yourself feeling exhausted, overspent, tired, drained, saddened, or disappointed around one or two people, try to see if any of their behaviour fits in with this article. If you notice that some people in your life fit these descriptions, then you need to either remove them from your personal life, or stop feeding into their attention-driven games of emotional manipulation. You know what to be on the lookout for now. And like G.I. Joe says, “knowledge is power.”