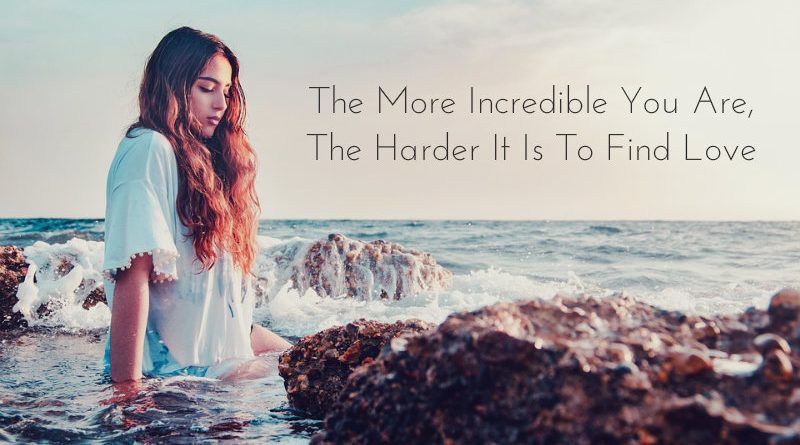 You’d think that being an all-around awesome person would make it easier to find a great guy to be with, but the opposite is often true. It might seem contradictory at first, but these are some of the reasons why being an incredible woman often means spending a lot of time single:

1. YOU’RE OFTEN SEEN AS BEING OUT OF SOMEONE’S LEAGUE.

When you’re a serious catch, other people are going to know it. But instead of doing everything they can to make you fall in love with them, a lot of guys won’t even make the effort to ask you out. It’s not that they don’t think you’re amazing — they just think you’re TOO amazing to even consider them as potential partners.

Truly awesome women are often a mixture of a lot of things, and the result can be a bit overwhelming for some guys. It’s like when you combine a bunch of colored beams of light and end up with something blindingly white, and honestly, even a lot of great men can’t handle that kind of brilliance.

3. YOU DON’T SETTLE FOR MEDIOCRE.

You probably — no — definitely could’ve found a boyfriend right now if you’d been willing to lower your expectations, but you hold yourself and your partners to higher standards than that. You’re great enough to deserve the man of your dreams, and you’re smart enough to know that settling for anything less than that would be a disservice to yourself. Unfortunately, that usually means you’re going to be waiting a pretty long time.

4. YOUR CONFIDENCE IS INTIMIDATING.

You’re not full of yourself, but you know that you’re pretty darn great. You walk through life with the mindset that nothing and no one will tear you down or make you feel inferior, and unfortunately, that’s enough to scare some guys away. The good news, though, is that you don’t want a guy who can’t handle a confident woman anyway.

5. YOU’RE NOT SCARED OF BEING ALONE.

Amazing women know how to stand on their own two feet. You may have your fingers crossed that you’ll find a decent man one day, but until then, you can take care of yourself just fine. While that definitely makes being single a lot easier, it also means that you’re probably not looking as hard as you could to find the love of your life. There’s nothing wrong with that, of course — it just means that it might take you a little longer to couple up.

Truly awesome women have their act together, and they know what they want out of both life and love. You’d think that this would HELP you find the right man, but instead, it often proves to be an obstacle. Sometimes, you’re so dead-set on finding a guy with the right qualities that you completely overlook decent men who might not tick off all your boxes. You don’t have to lower your standards to find love, but opening your mind a little might help.

7. YOU ATTRACT THE WRONG PEOPLE.

The great thing about being amazing is that a lot of people can see what a catch you are. The not-so-great thing is that a lot of those people aren’t really the kind you want to attract. While you might have some genuinely wonderful guys who want to date you, you’ll also have a lot of terrible ones thrown into the mix… but you might not realize just how bad they are until it’s too late.

8. YOU HAVE SEEMINGLY INFINITE PATIENCE.

Once you do get into a relationship, your forgiving nature is usually a large part of what helps it last for so long. Your patience is part of what makes you such a beautiful person and friend, but it can end up screwing you over if you’re not careful. You’ve probably found yourself in a few situations where a guy kept screwing up, but you kept giving him second, third, and fourth chances. It wasn’t that you were settling — you just know that people make mistakes. The problem always comes in when you tolerate the wrong guy longer than you should and miss out on someone better as a result.

You’re not the type to just sit at home and wait for the man of your dreams to come sweep you off your feet. You’re driven in your career, hobbies, and social life. Your schedule is normally pretty full, which doesn’t leave a lot of time to go out and date new people. The reason your life is so fulfilling is because you have so much going on, but it can get a little tough when you decide you’re ready to add a whole new person into the mix.

You’re generous in just about every aspect of your life, but not everyone is so eager to give their relationships their all. While you love making people happy, you’re no doormat, either — you want the person you’re dating to give as much to the relationship as you do. When you’re as amazing as you are, though, that’s a pretty big request. You’ll find the guy you deserve eventually, but it just might take a little longer than it would for someone who wasn’t as great as you.

By Averi Clements for Bolde.com