A hug is an intimate act that occurs among human beings. As a matter of fact, it is an act of love and tenderness. Besides that, its meaning depends on the social and cultural environment in which it happens.

There are cultures that are more open to bodily contact and they even use hugs as a greeting. Meanwhile, in some other parts of the world, it is a restricted action for couples and isn’t typically given without a very noticeable reason and a very close relationship.

Whatever the circumstances, it is similarly obvious that all of us have varied methods for offering embraces and it relies on a few variables. One of them is the individuality of every person. 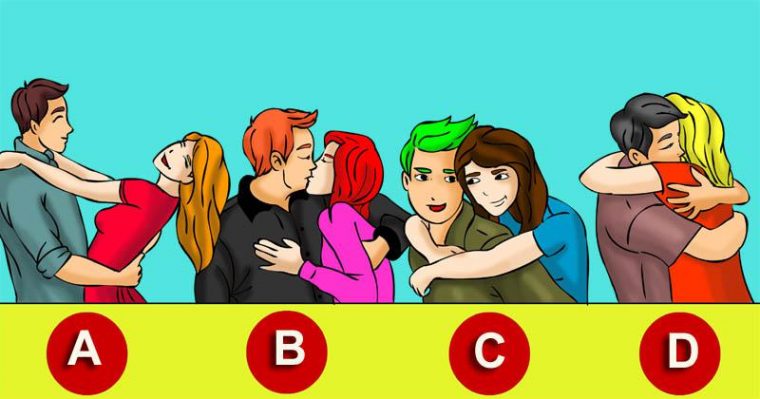 With that here is a test, where you just have to choose your favorite hug and then scroll down to see what psychology says about it.

If your favorite embrace is the first, Psychology reveals that you’re the type of person who isn’t falling in love from the start of the relationship. You favor to build the bond with the other person and, just in case something fails, you’re always there when someone wants to give up. Even though someone likes you a lot, you don’t typically show your feelings up until you’re into the relationship. You choose the other person to be the first to disclose their emotions and then let things to flourish more.

Though in principle it appears to be a very rational way of being, extreme caution can be unsafe for the relationship. Chill out, lots of relationships start with a friendship.

B. FALL IN LOVE AT FIRST SIGHT

The second type of hug is very romantic and very intimate one, we you able to notice it? It is more affectionate than the others and there are some things that draw attention. But before that: you have the inclination to fall in love at first sight and surrender everything for love. This hug is common in romantic movies and so you are. You’re capable of lighting the flame of love with relative ease and speed. Additionally, you like to feel the warmth and passion of the other person during the hug equally.

The most significant thing is intimacy and a firm and strong embrace. Nonetheless, being a person who falls in love at first sight, the presence becomes one of the important aspects in which you make your image of the other person. It is advised that before permitting yourself to carry the passion with the other person, think through of knowing them better. By concentrating on the appearance, it is likely that things start to go wrong once you know the character of the other person doesn’t match the image you made at the beginning.

C. DO NOT TRUST ANYONE

The letter C embrace signifies one of the people firmly clutching their partner from behind, with both hands hanging over their shoulders or around the neck. Even though at first glance it doesn’t appear like it, this kind of hug shows a great confidence focused on the other person. At the same time, it is a sign that it’s hard for you to open up and to put trust other people isn’t an easy task. As for romance, you always have a lot of reserve and carefulness, which can dishearten you in the first phase of the relationship. Nevertheless, later you pay off more.

Even if you’re on your first date and have a very good impression of the other person, you don’t typically open up well into the relationship. This makes you miss many good chances of meeting valuable people. Try to open up a little more if you see that the other person is approachable, dependable and seems to have good aims. Once the relationship tightens, you must open up and let yourself to leave that entire urge that you’re keeping inside. Once you compromise, you offer everything and even more.

D. YOU HAVE A SPECIFIC TASTE

This is perhaps the most intimate embrace among the four, given the insignificant distance untying the two characters. It is a very tight hug, well-intentioned for two lovers who haven’t seen each other for a long time and have missed each another big time. Your sense of taste is very well distinct in terms of the love relationship. You have an image in your head, and you even get to plan specifics, like the smile you want to see from your future partner.

As soon as you were able to find someone who reaches your expectations, you will move heaven and earth to triumph over their heart. Nevertheless, you concentrate on those details that you have organized. With that, there are times that you overlooked the general image that may be less favorable. Meanwhile, you have a tendency to get bored easily once you have conquered the person. You wanted to move quickly to another challenge.

Is it spot on? Share it with your family and friends for them to know what their favorite hug means!