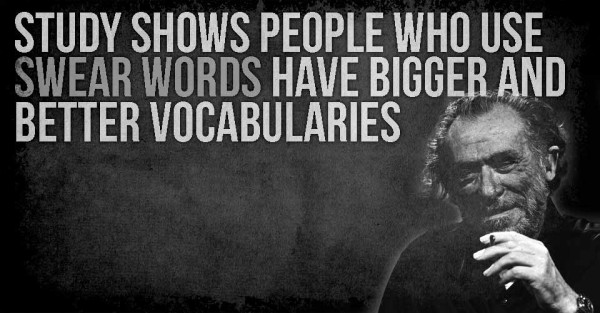 *This article contains profanity. It may be an unnecessary amount, but I’m not the best judge of “acceptable profanity levels.” Is there such a thing? Anyways, it’s in here. Be advised.*

“Using swear words makes you seem unintelligent.” If you supplement your daily conversations with a healthy dose of cursing as often as I do, then I’m sure you’ve heard that exact sentence more than once in your life. Not to fret, fellow expletive enthusiasts, science has your back! A recent study has found that people who have a vast reserve of curse words at hand are more likely to have a richer vocabulary (and higher intelligence) than those who don’t.

This goes against the long-held belief that “people use swear words when they can’t express themselves intelligently.” What a crock of shite. As Stephen Fry once said, “The sort of twee person who thinks swearing is in any way a sign of a lack of education or a lack of verbal interest, is just f*cking lunatic.”

This belief is even perpetuated by well known authors, such as Jim O’Connor. O’Connor runs the Cuss Control Academy, which teaches people how to stop swearing, and has written the book Cuss Control which was featured on the Oprah Winfrey Show. He says, “swearing can also reflect an abrasive or negative attitude and poor vocabulary.” Oh really?

Two psychologists, Kristin Jay and Timothy Jay, had a crazy idea they wanted to test out. Did this whole stereotype about cursing and low-intelligence have any merit? Or are people who are well-versed in swear words more likely to have a greater overall language fluency?

They decided to do a few experiments to find out if “I had a fucking great day” is intellectually equivalent to “The day I had was undoubtedly superb.” Well, in more scientific terms of course.

The first experiment had 43 participants (30 women/13 men) between the ages of 18 and 22 years old who were first asked to list off as many “taboo” or swear words as they could within 1 minute. Next, they were asked to list as many animal names as the could in 1 minute. The use of animal names in the study were meant to show the level of someone’s overall vocabulary and general interest in language.
Read: Researchers Find That People Who Use Curse Words Could Be Smarter And More Articulate

The second experiment had 49 participants (34 women/15 men) between the ages of 18 and 22 years old. They were asked to write down as many swear words and animal names beginning with the letter “A” as they could. They were asked to do this again, with different letters. During both of these experiments, participants completed FAS tasks, which are standardized verbal fluency tests.

The complete findings from Kristin Jay and Timothy Jay can be found on the Massachusetts College of Liberal Arts website, but here are two excerpts that summarize this work.

“Another negative assumption about swearing is that it is an undesirable alternative to using non-taboo words, the result of a limited vocabulary. Though widely held, the POV (poverty of vocabulary) view is inconsistent with language research in several ways. First, the assumption that people say taboo words because they have an impoverished vocabulary implies that people say taboo words when lexical access fails. Speech production research, however, shows that when speakers get stuck, they hesitate, repair mistakes, or utter expressions such as “er” or “um,” but do not simply spit out taboo words.”
Read: 14 Historical Curse Words that we Should All be using Every Day

You can remind people who put you down for swearing too much, about this little tidbit here. Scientifically speaking, people don’t say “fuck,” “damn,” or “shit” as fillers because they can’t think of something else. When “lexical access”, or the ability to use a word you want right when you want it, fails, people say “um,” or “uh,” or many other things. But not swear words.

“While taboo words can obviously be offensive and can be associated with negative states, it would be a mistake to overgeneralize these negatively-toned phenomena to taint all uses of swear words, or ascribe undesirable traits to those who use them. Fluency is fluency, people who swear aren’t necessarily otherwise inarticulate, and, arguably, a good taboo lexicon may be considered a complement to the lexicon as whole, ideally a mechanism for emotional expression of all sorts: anger, frustration, and
derogation, but also surprise and elation.”

That’s right! Using expletives can convey emotion in a way that is understood universally. Basically, you can implement another level in your vocabulary by using words that are transitional mechanisms of expression.

This study was conducted with a small amount of people, but I believe the findings would be the same on a greater scale. Until we can see such a study, I think we should turn to one of the greatest living masters of the English language and hear what he has to say on the topic of swearing. Is it unnecessary? Fucking-A.

Thanks to Iheartintelligence.com for this article and featured image