You don’t have to know a whole lot about science to know that black holes normally suck things in, not spew things out. But NASA detected something mighty bizarre at the supermassive black hole Markarian 335.

Then an enormous pulse of X-ray energy spewed out. This kind of phenomena has never been observed before.

“This is the first time we have been able to link the launching of the corona to a flare. This will help us comprehend how supermassive black holes power some of the brightest objects in the cosmos.” Dan Wilkins, of Saint Mary’s University, said.

NuSTAR’s principal investigator, Fiona Harrison, noted that the nature of the energetic source was “enigmatic,” but added that the capability to in fact record the event should have provided some clues about the black hole’s size and structure, along with (hopefully) some fresh info on how black holes work.

Fortunately for us, this black hole is still 324 million light-years away.

So, no matter what bizarre things it was doing, it shouldn’t had any effect on our corner of the cosmos. 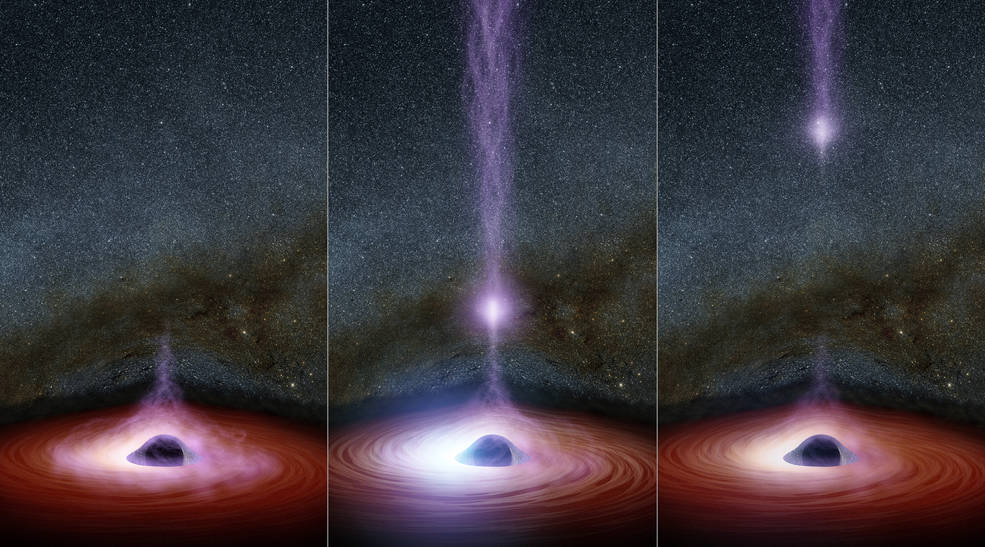 While we like to think we have a fairly good understanding of space, much of what we count as knowledge is just theory which has yet to be disproved.

“The corona gathered inward at first and then launched upwards like a jet,” said Wilkins. “We still don’t know how jets in black holes form, but it’s an exciting possibility that this black hole’s corona was beginning to form the base of a jet before it collapsed.”

How could the researchers tell the corona moved? The corona gives off X-ray light that has a slightly different spectrum — X-ray “colors” — than the light coming from the disk around the black hole. By analyzing a spectrum of X-ray light from Mrk 335 across a range of wavelengths observed by both Swift and NuSTAR, the researchers could tell that the corona X-ray light had brightened — and that this brightening was due to the motion of the corona.

Coronas can move very fast. The corona associated with Mrk 335, according to the scientists, was traveling at about 20 percent the speed of light. When this happens, and the corona launches in our direction, its light is brightened in an effect called relativistic Doppler boosting.

Putting this all together, the results show that the X-ray flare from this black hole was caused by the ejected corona.

“The nature of the energetic source of X-rays we call the corona is mysterious, but now with the ability to see dramatic changes like this we are getting clues about its size and structure,” said Fiona Harrison, the principal investigator of NuSTAR at the California Institute of Technology in Pasadena, who was not affiliated with the study.

Many other black hole brainteasers remain. For example, astronomers want to understand what causes the ejection of the corona in the first place.

So it looks like some textbooks will need to be rewritten. And while this particular supermassive black hole is 324 million light-years away, I’m not taking any chances.