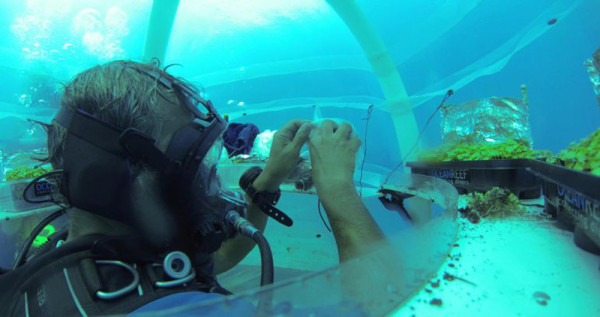 20 feet below the surface, crops like strawberries, lettuce, and basil grow in balloon-like biospheres at an incredible pace.

When Sergio Gamberini was traveling through Italy on a summer vacation, he was struck with a “crazy” idea to grow plants under the sea. After making a few calls, he immediately started experimenting, sinking transparent biospheres under the ocean and filling them with air.

What began as an inspired notion developed into a collection of the world’s first underground greenhouses, which are 20 feet underwater and anchored to the floor of the sea off the coast of Noli, Italy.

Nemo’s Garden, the name of the experimental project, is in its fourth year and is operated as part of the family-run Ocean Reef Group, which Gamberini is president of.

The underwater greenhouses are balloon-like biospheres which maintain a constant temperature of 26°C(79°F) and about 83% humidity. Reports The Washington Post, the shape of each biosphere allows for water to constantly evaporate and replenish the plants.

In addition, the high amounts of carbon dioxide act like steroids for the plants, making them grow at very rapid rates.

Gamberini’s diving company manages the five balloon-like biospheres. At present, a number of plants, such as basil, lettuce, strawberries, and beans, are growing under the water and are thriving.

Because Ocean Reef Group has a patent on the underwater structure, in the future, the group aims to build a few more and experiment with different crops. One plan is to cultivate mushrooms, which should thrive in the humid environment.

The project hasn’t been without its ups and downs.

“It’s been a learning curve,” said Sergio’s son, Luca Gamberini. “We completely lost the crops four times, but it didn’t really matter because we have such great growth rates.”

Despite the challenges, Ocean Reef Group has reported excellent crop output every year. No produce has yet been sold, but Sergio’s wife has reportedly made some delicious cuisine with the produce for dinner parties.

The company’s success hints at a new form of crop production that might be used to feed Earth’s ever-increasing population.

“I see possibilities for developing countries where harsh conditions make it difficult for plants to grow.”

An additional benefit of the underwater spheres is that they can be built and maintained without harming the environment.

In fact, the unique pods are attracting all kinds of wildlife. Octopuses apparently like taking shelter under the structures and endangered seahorses have gathered beneath the biospheres to develop nurseries.

Scroll through some of the gorgeous photos of the unique agricultural project below:

Thanks to True Activist for this article | Featured image source