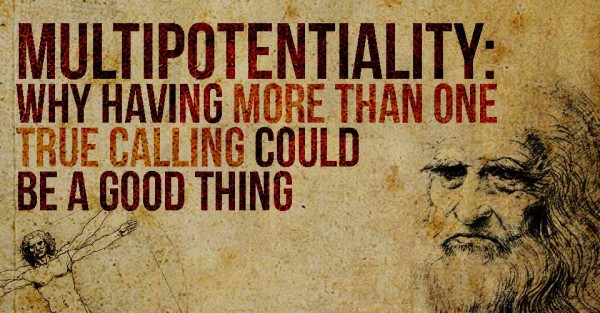 When you were a kid, you were asked the harmless question “what do you want to be when you grow up?” And the answers given were usually solitary in value- a doctor, a fireman, an astronaut. This type of question seems harmless to ask a child, but as we get older, the question remains but the method of questioning changes. We are asked throughout high school to choose a career path to prepare us for college, where we then are asked to make a singular choice that will last us the rest of our lives. But what if you aren’t wired for this type of one-size-fits-all lifestyle? What if you have more than one true calling?

Career coach, artist, and writer, Emilie Wapnick has coined a term for those of us who fit into more than one category: multipotentialite. Although it is a mouthful, the word is a pretty accurate description. Having more than one passion – more than one true calling- is perfectly normal. Even if we are indoctrinated into believing there is something wrong with us if we don’t settle down and become great at one specific thing.

Emilie is the founder of Puttylike, an online resource aimed at helping other multipotentialites integrate their passions and interests into their lives and businesses. She describes her experience as a “multipotentialite”, saying:

“The only constant in my life is shape-shifting, exploration and evolution. I went from being a serious musician and songwriter to a web designer, filmmaker, writer, and law student (I graduated from the Faculty of Law at McGill University in 2010). After that, I became interested in entrepreneurship, launched a business, became a coach, and wrote a book.

All of these pursuits were personal choices that I made out of genuine interest. Even law began as a fascination. My aim was not to become a lawyer, but to simply explore this new interest of mine.

There’s something that draws me to each of my interests and it’s not “excellence.” I have no interest in committing to one thing forever. Once I no longer feel inspired in a field, I simply move on. Some people call this “quitting,” I call it growth.”

I don’t know about you, but when I read her words I felt like saying, “Yes! Someone else who gets it!” Personally, I used to feel ashamed when I would talk about my college or career past and it’s all because I didn’t stick to one thing. We’re told to focus, and choose one road to follow but that never worked for me. I graduated high school at 15 and was enrolled in my first year of college at 16. I was constantly told I had “so much potential” by those who intended for me to stick to one goal… but I had many. And that was dissapointing to some. I left college to pursue the things that fascinated and interested me- I started taking courses on quantum physics and conceptual art, and for the first time in my life I actually felt like I had “so much potential.” After reading Emilie’s words, I knew I wasn’t alone.
Read: 15 Motivational Quotes to Get You Moving Again

Emilie Wapnick speaks about multipotentialites in the following TED Talk video. She beautifully explains what it means to have more than one true calling in life, the anxiety and internal struggles we face, and the incredible gifts we learn and share by being multipotialites.