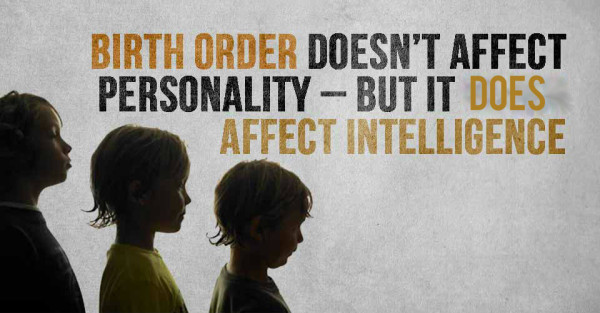 The theory that your birth-order affects your personality is entirely incorrect, but it has an interesting
history. It stems from one of the most heated scientific disputes of all time, between Sigmund Freud and
Alfred Adler. Freud, a firstborn child, and Adler, a middle child, had conflicting ideas about this topic.
Adler proposed that first and last-born children suffer from neuroses fueled by their constant struggle for success and superiority, and believed middle children were healthier, more relaxed, and somewhat rebellious. The concept of intelligence, however, was completely disregarded.

The flaw with this theory is the lack of empirical data. Today, we are able to gather information on a
massive scale, therefore finding accurate results.

Speaking of results, PNAS recently published a study that is taking the scientific community by storm, and even Freud and Adler would be impressed with the findings.
Read: 8 Things that People with High Emotional Intelligence Simply Don’t Do

In other words, every child after the first-born is likely to be slightly less intelligent than the last. The
researchers examined data from more than 20,000 participants (5,240 from the US, 4,489 from the UK, and 10,457 from Germany) and found conclusive evidence that there is indeed a birth-order effect on intelligence.

Ars technica touches on an interesting part of this study saying, “later-born children not only receive less intellectual stimulation from their familial environments, but they also receive and internalize messages that they are less intellectual than their older siblings.”
Read: The 9 Multiple Intelligences – Which “Smart” Are You?

The researchers on this study speculated a couple reasons as to why this slight decline in intelligence
through birth-order takes place:

Researchers have debunked some common misconceptions about the different personalities of siblings (sorry Freud and Adler). Besides IQ tests, the participants were also given personality assessments. While first- borns are often thought to be more outgoing, outspoken, and social, there was no evidence for this. In fact, no personality differences held reliably constant between siblings of different ages.
Read: Emotional Intelligence: Is It More Important than your IQ?

So if there are some of you who are unhappy with the arm-chair psychologists who have diagnosed you based on your “middle-child syndrome” or the like, now you can rest assured they were wrong. And the science is here to back you up.