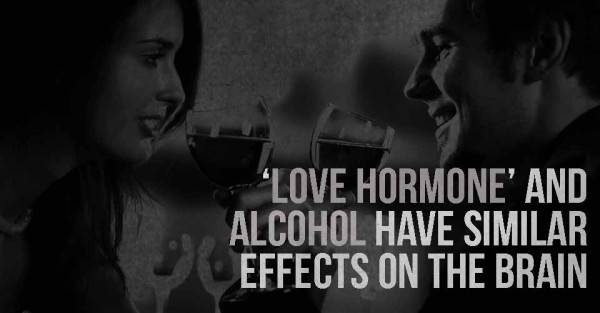 More and more people are becoming familiar with the chemical known as “oxytocin.” The sudden increase in knowledge is partly due to scientists and researchers making their results publicly known- and the results are usually pretty fascinating.

Neuroscience and Biobehavioral Reviews recently published a study that has the scientific world buzzing. What was so interesting about this particular study? Researchers found that oxytocin, a.k.a. “the love hormone”, and alcohol have almost identical effects on psychological behaviour.

If you’re not an oxytocin guru and need some basic information on the hormone, I’ve got you covered. Dubbed the “hug hormone”, “cuddle chemical”, “moral molecule”, and “bliss hormone”, oxytocin’s effects on behaviour play a crucial role in our lives. Oxytocin is classified as a nonapeptide in chemistry, and a neuropeptide in biology- meaning it acts as both a hormone and a brain neurotransmitter. Also, when oxytocin is released into the system, multiple psychological effects influencing social behavior and emotion are experienced.
Read: New research proves psilocybin’s efficiency in treating alcoholism

Hmm… That last part sounded similar to the effects of alcohol. The School of Psychology at the University of Birmingham had a similar thought, which brought them to this study.

Dr. Ian Mitchell, a researcher on this study said, “We thought it was an area worth exploring, so we pooled existing research into the effects of both oxytocin and alcohol and were struck by the incredible similarities between the two compounds.”

The oxytocin was administered nasally, and was found to “closely mirror the well-established effects of alcohol consumption.”

Mitchell went on to say, “They appear to target different receptors within the brain, but cause common actions on GABA [an inhibitory neurotransmitter] transmission in the prefrontal cortex and the limbic structures. These neural circuits control how we perceive stress or anxiety, especially in social situations such as interviews, or perhaps even plucking up the courage to ask somebody on a date. Taking compounds such as oxytocin and alcohol can make these situations seem less daunting.”
Read: Studies Find Psychoactive Drug Safer Than Alcohol When Driving

But the similarities between the two don’t end there. The negative effects of alcohol and oxytocin were also found to be the same. Both can cause people to become more aggressive, more boastful, and envious. One of the more dangerous effects that both share is the increased risk factor. These compounds can affect our sense of fear and anxiety, causing us to participate in more risky and dangerous behaviour.
Read: 4 Everyday Addictions We all Face, and How to Overcome Them

Dr. Steven Gillespie, researcher on the study said, “I don’t think we’ll see a time when oxytocin is used socially as an alternative to alcohol. But it is a fascinating neurochemical. Understanding exactly how it suppresses certain modes of action and alters our behaviour could provide real benefits for a lot of people.”

Thanks to IHeartIntelligence for this article