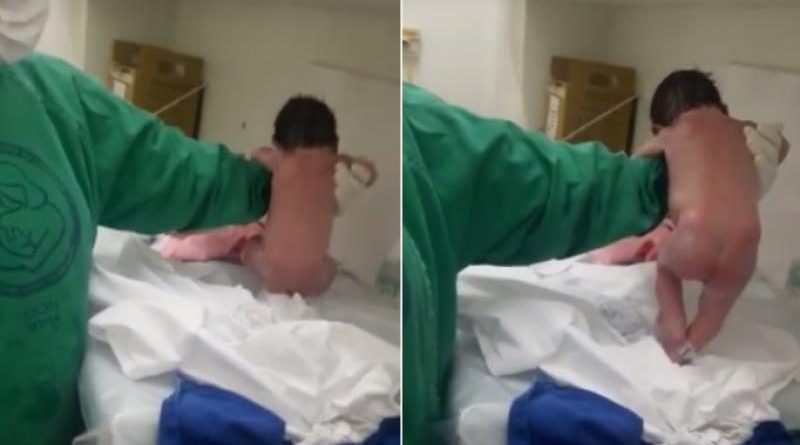 By Janet Tappin Coelho in Brazil | The Sun

The video, which was uploaded to social media on Friday has stunned viewers who declare the tiny tot’s attempt to walk is nothing short of a miracle.

The midwife cradling the little mite across the chest and supporting her weight with one arm can’t believe what she is seeing, as the amazing infant wrestles to walk on her own.

The nurse, who is dressed in surgical robes with a clinical mask over her mouth, is heard crying out in amazement: “Oh my gosh, the girl is walking. Good gracious!”

Another person in the room who is capturing the moment on camera declares: “Wait let me film this.”

They then shout for another colleague called Ju, probably short for Julia, to come to witness the unbelievable moment.

The midwife seen in the video, explains she has been trying to give the baby a bath but the child just wants to get up and walk.

“Merciful father. I was trying to wash her here and she keeps getting up to walk,” she explains pointing with one hand to where she initially tried to lay the baby down to give the child her first bath.

“She has walked from here to here,” she adds indicting the area the child has already covered.

The midwife then lifts the baby up and returns the infant back to the original position and in an astounding burst of strength, the little nipper refuses to lie down on her front, pushes up onto her legs and resumes her astonishing journey across the neonatal table once again.

A gob-smacked onlooker declares: “Wow, she is so cute it’s amazing. If she’s like this now, I can just imagine how precocious she is going to be as she grows up.”

To which the midwife holding the baby girl says: “Heavens above. If you told people what has just happened no one would believe it unless they saw it with their own eyes.”

The video has gone viral with over 50 million views and 1.3 million shares on Facebook.

Few details are available to identify whose baby it is and where the incident happened.

But the insignia on the midwife’s robes suggest she works at a Santa Cruz Hospital, in a city in the state of Rio Grande do Sul, south Brazil.

A newborn normally takes up to 12 months to learn to walk and that usually comes only after they have achieved and passed other major miles-stones in their development such as hand to eye coordination, sitting up and crawling.

Meanwhile, there have been several reports of babies as young as six months old walking on their own, unaided.

But this newborn appears to have incredible determination and it looks as though there will be no stopping her.