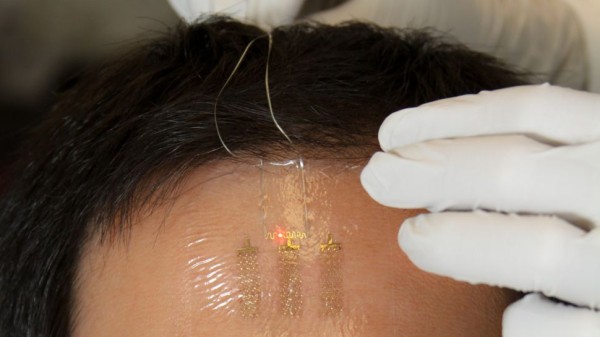 A brain-computer interface that sticks onto the skin like a temporary tattoo can help people operate machinery using their minds alone.

Designed to conform to human skin, the device is easy to wear in any situation:

Although Hidden EEG can’t rival the precision of the keyboard and mouse from your desktop computer, it is good for controlling systems in a more passive manner. Instead, it might start a coffee pot brewing in the morning when your brain activity implies you’re waking up. Or, if the device reads that you’re in a highly focused state, it could tell your phone to silence any notifications.

“What we need is to measure EEG unobtrusively, invisibly,” says Stefan Debener of the University of Oldenburg in Germany, whose lab has developed its own version of an in-ear EEG system. He says that in tests on his own system, half the subjects forgot they were wearing the sensors. “This is exactly what you want,” he says. “You want tech that merges with the user.”

Thanks to Reality Sandwich for this post – featured image source