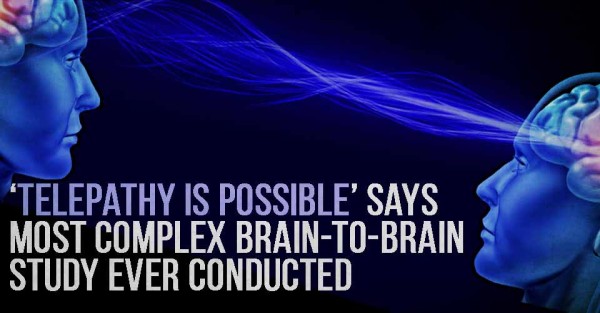 Recently, the University of Washington conducted research on brain-to-brain connections. What they found shows us that humans are capable of transmitting information to each other via our brains, and just our brains.

Participants in this study played a question-and-answer game over the internet in which signals were transmitted from one brain to the other. This study is the first to show that two brains can be directly connected to enable someone to guess what is on another person’s mind.

“This is the most complex brain-to-brain experiment, I think, that’s been done to date in humans,” said lead author Andrea Stocco, an assistant professor of psychology and a researcher at UW’s Institute for Learning & Brain Sciences.
Read: New Alzheimer’s Treatment is Fully Restoring Memory Function

“It uses conscious experiences through signals that are experienced visually, and it requires two people to collaborate,” Stocco said.

“The first participant, or “respondent,” wears a cap connected to an electroencephalography (EEG) machine that records electrical brain activity. The respondent is shown an object (for example, a dog) on a computer screen, and the second participant, or “inquirer,” sees a list of possible objects and associated questions. With the click of a mouse, the inquirer sends a question and the respondent answers “yes” or “no” by focusing on one of two flashing LED lights attached to the monitor, which flash at different frequencies.

Talking to Yourself can Improve Your Brain
A “no” or “yes” answer both send a signal to the inquirer via the Internet and activate a magnetic coil positioned behind the inquirer’s head. But only a “yes” answer generates a response intense enough to stimulate the visual cortex and cause the inquirer to see a flash of light known as a “phosphene.” The phosphene — which might look like a blob, waves or a thin line — is created through a brief disruption in the visual field and tells the inquirer the answer is yes. Through answers to these simple yes or no questions, the inquirer identifies the correct item.”

72% of the time, participants guessed the correct object.

“They have to interpret something they’re seeing with their brains,” said co-author Chantel Prat, a faculty member at theInstitute for Learning & Brain Sciences and a UW associate professor of psychology. “It’s not something they’ve ever seen before.”

Caitlin Hudac wearing a cap which uses transcranial magnetic stimulation (TMG) to deliver brain signals from the other participant. –University of Washington

Andrea Stocco and Chantel Prat received a $1 million grant from the W.M. Keck Foundation. This gave them the opportunity to broaden their studies on decoding even more complex brain interactions. Currently, they are exploring the possibility of “brain tutoring.” In essence, brain tutoring is simply transferring knowledge from a teacher to a pupil. This could also be used to transfer signals from a healthy brain to ones that are developmentally impaired, or ones that have been affected by strokes or accidents.

Another aspect of their experiments is brain-state transmissions. What this means is sending signals from an alert subject, to a sleepy one, or from a focused pupil to one who suffers from A.D.H.D.

18 Things To Know When Loving Someone With A.D.D.

“Imagine having someone with ADHD and a neurotypical student,” Prat said. “When the non-ADHD student is paying attention, the ADHD student’s brain gets put into a state of greater attention automatically.”

Both Stocco and Prat are excited to discover what possibilities lie uncovered in the human brain.

“Evolution has spent a colossal amount of time to find ways for us and other animals to take information out of our brains and communicate it to other animals in the forms of behavior, speech and so on,” Stocco said. “But it requires a translation. We can only communicate part of whatever our brain processes.

“What we are doing is kind of reversing the process a step at a time by opening up this box and taking signals from the brain and with minimal translation, putting them back in another person’s brain,” he said.

What do you think about these brain studies? Do you think scientific telepathy will benefit us?