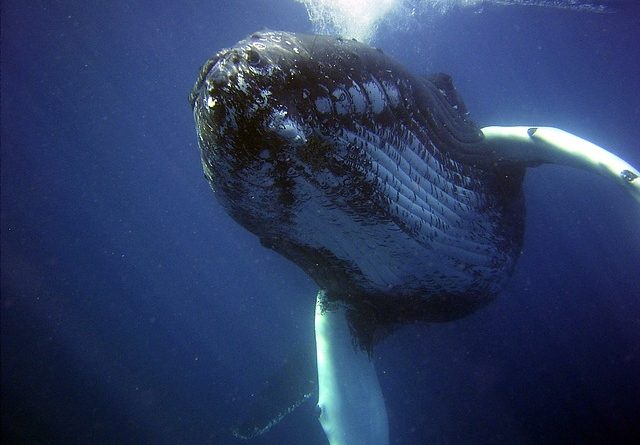 Humpback whales are known for being the loners of the sea – while they tend to migrate, feed, and mate in groups, they spend much of their existence in solitude, or in small, short-lived groups of up to seven individuals.

But something could be brewing in our oceans, because scientists are reporting 22 separate instances of humpback ‘super-groups’ that defy explanation – never-before-seen groups of 20 to 200 whales all appearing off the southwest coast of South Africa in recent years.

“I’ve never seen anything like this,” lead researcher Ken Findlay, from the Cape Peninsula University of Technology in South Africa, told New Scientist.

According to a new study, 22 instances of humpback super-groups were witnessed on three research cruises in 2011, 2014, and 2015, as well as a handful of public observations from aircraft over the south-western Cape region of South Africa.

Researchers are calling the behaviour “novel and intense”, saying it could be a sign of the mysterious resurgence of humpbacks in recent years.

“[W]e propose that the ‘super-group’ feeding phenomenon (as tightly spaced large groups of whales) is a relatively recent behaviour exhibited by these whales,” Findlay and his team report.

“[N]o such dense feeding aggregations have been reported elsewhere in low or mid latitudes during Southern Hemisphere humpback whale migrations. Indeed, aggregations of whales of this size have seldom been reported in the literature, with ‘large’ groups often numbering in the range of 10 to 20 or less.”

It’s not just the size of these groups that’s weird – the location doesn’t make a lot of sense either.

By gathering near South Africa in summer, the humpbacks are choosing to bolster their numbers thousands of kilometres away from their usual feeding grounds in the southern polar region of Antarctica, and scientists are at a loss to explain the sudden change in behaviour.

During the summer months, Southern Hemisphere humpbacks (Megaptera novaeangliae) tend to congregate in Antarctic waters to feed on massive amounts of krill and fish each day in an effort to build up fat stores for the winter.

Once they’ve had their fill, they’ll migrate north to calving and nursery grounds in subtropical and tropical coastal waters for the winter.

So why are their routines all messed up?

The researchers aren’t ready to explain the behaviour just yet, as they still have a lot of evidence to collect, but say the new feeding strategy could be due to changes in prey availability due to shifting conditions in the world’s oceans, or it could simply be the result of increasing humpback numbers – as weird as that sounds.

We’re so used to hearing about species in decline these days, but Southern Hemisphere humpbacks are actually bucking the trend, with Australia’s humpback population reportedly at its healthiest levels since whaling ended along the east coast in the 1960s.

Findlay and his team suggest that this rapid increase could be the reason for changes in prey availability, forcing some to switch up their feeding strategies and end up in South Africa.

It could also be that this behaviour isn’t actually new – as Mallory Locklear reports for New Scientist, humpback whales were found feeding off the south-west Cape coast of South Africa once in 1914, before whaling reduced their numbers by around 90 percent.

Now that their numbers are increasing, the whales could be returning to a behaviour established long ago, or perhaps a few have been doing it this whole time, but until they formed super-groups, no one had noticed.

Regardless of the actual mechanism behind the appearance of these super-groups, the researchers remind us of a very important truth – if a 30,000-kg (66,000-pound) animal has decided it wants to be somewhere, you really don’t want to mess with it.

That means if the South African coast is to be the new humpback hangout, we need to make sure the area is safe for the annual krill slaughter.

“Despite the unknown cause of this recent behaviour, we postulate that the area has developed or is developing into an important seasonal humpback whale feeding ground that attracts significant immigration into the region in the late austral spring/early summer,” the team concludes.

Either that, or it’s a sign of the apocalypse, but whales wouldn’t do that to us, right?

The study has been published in PLoS One.