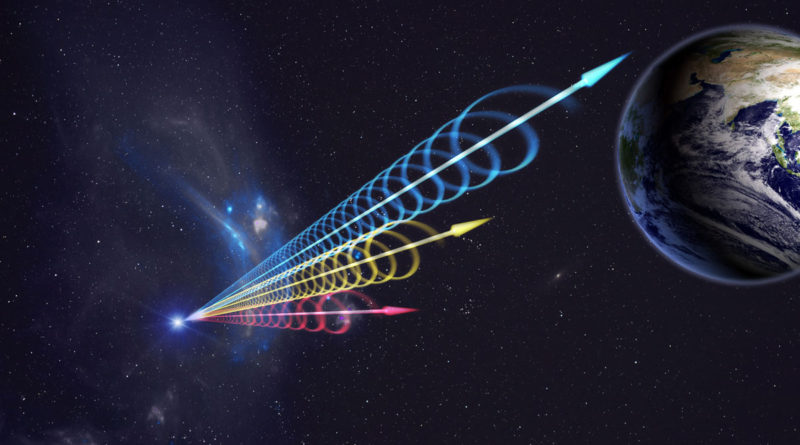 Of all the unexplained things in our Universe, fast radio bursts are arguably the weirdest. They’re some of the most elusive and explosive signals ever detected in space, and while they last for mere milliseconds, they generate as much energy as 500 million Suns.

Last year, researchers found 16 Fast Radio Bursts all coming from the same source beyond our Milky Way, and now Harvard physicists have proposed that signals like these could be evidence of advanced alien technology.

“Fast Radio Bursts are exceedingly bright, given their short duration and origin at great distances, and we haven’t identified a possible natural source with any confidence,” says theoretical physicist Avi Loeb from the Harvard-Smithsonian Centre for Astrophysics.

“An artificial origin is worth contemplating and checking.”

Fast Radio Bursts (FRB) aren’t all that uncommon – since the first one was detected back in 2007, researchers predict that around 2,000 of these things are lighting up the Universe every single day.

But the problem with detecting and analysing these signals is that they’re not only incredibly fleeting – less than 5 milliseconds in duration – they’ve been frustratingly random in origin.

That was until late 2016, when researchers detected what appears to be the first repeating FRB – 11 high-energy radio bursts all coming from a single source, way out in the distant Universe.

Earlier this year, six more FRBs were detected coming from the same location, and researchers managed to pinpoint their location to a faint dwarf galaxy, more than 3 billion light-years from Earth.

That was a huge development, because until that point, the FRBs we’d detected had all come from random origins in space, making follow-up observations impossible.

And if you wanted to go searching for some more FRBs to better understand them, your hunting ground is literally the size of the entire known Universe.

But despite finding the first ever repeating FRBs, collectively known as FRB 121102, no one has been able to provide a convincing explanation for what’s causing such powerful outbursts.

The leading hypotheses right now are that these signals result from the most volatile and explosive events in the Universe – supermassive black holes coughing up cosmic material; explosions of superluminous supernovae; or rotating magnetars – a type of neutron star that pummels everything around it with intense magnetic fields.

But this is all just speculation, based on the assumption that such powerful signals would originate from the most powerful events we’ve ever detected.

Now Loeb and his team say that in the absence of an explanation everyone can agree on, we should be looking at some slightly less… natural sources.

“[W]e have posited that Fast Radio Bursts are beams set up by extragalactic civilisations to potentially power lightsails,” they describe in a new paper.

If you’re not familiar with lightsails, the technology is still in its infancy – at least, on Earth – but has the potential to revolutionise space exploration, with NASA researchers estimating that we could get one to Mars in three days flat.

Known as ‘photonic propulsion’ systems, lightsails are powered by the momentum of photons (particles of light), which could either be harnessed from the Sun’s rays, like Bill Nye’s light sail, or giant Earth-based lasers, like this NASA proposal.

That means virtually zero fuel would be required, and journeys could last as long as the physical parts could hold.

With that in mind, Loeb and his team investigated the possibility that Fast Radio Bursts were coming from an enormous radio transmitter on a distant alien planet, that beams FRB-like signals across the Universe to propel giant light sails.

Using data collected by known FRBs, they calculated that if the signals were emitted by an enormous, solar-powered radio transmitter billions of light-years away, it would need a planet-sized area to collect enough sunlight to produce signals strong enough for us to detect here on Earth.

And not just any planet – it would need to be twice the size of Earth. So maybe even a Dyson Sphere?

Here’s the basic premise, based on a proposal by Breakthrough Starshot, a lightsail project backed by Stephen Hawking:

In order to prevent all that light frying the planet and the radio transmitter within seconds, a massive water-based cooling system would be required.

And hey, something like that sounds inconceivable to us humans, but we haven’t even figured out cordless charging and hoverboards, so what do we know? The researchers say such a device is well within the laws of physics, so you’ve got to give them that.

The purpose of building such a colossal device would be two-fold – not only could it beam signals across vast areas of the Universe to other civilisations (like ours?), it could also propel probes or spaceships on extended journeys through interstellar space.

“We envision a beamer that emits the radio waves as a method of launching a light sail,” Loeb told George Dvorsky at Gizmodo. “In the same way that a sailboat is pushed by wind, a lightsail is pushed by light and can reach up to the speed of light.”

Of course, like the previous explanations for Fast Radio Bursts, this is all highly speculative, and Loeb isn’t pretending that they have all the answers in their new proposal.

But he says science isn’t a matter of what you believe, it’s a matter of evidence, and it’s always worth throwing a bunch of ideas out there to see where the data fits.

“Although the possibility that FRBs are produced by extragalactic civilisations is more speculative than an astrophysical origin, quantifying the requirements necessary for an artificial origin serves, at the very least, the important purpose of enabling astronomers to rule it out with future data,” the team concludes.

The paper has been accepted for publication in an upcoming edition of Astrophysical Journal Letters, and you can read it for free now at arXiv.org.