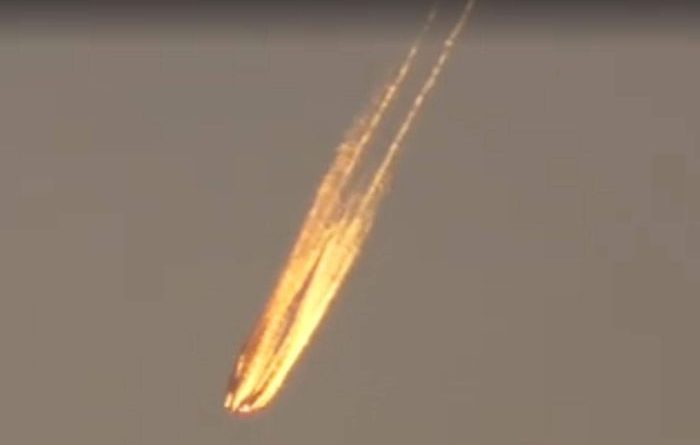 The mystery of a fireball crossing the Tasmanian skyline has been solved, but not before Facebook users declared alien life had finally made it to Tasmania.

The federal government’s air navigation services provider Airservices Australia confirmed the object captured on hundreds of mobile phones and cameras across southern Tasmania early on Tuesday morning was nothing more than an aircraft “as it passed over Australian airspace”.

But that assertion did not stop members of the public drawing their own conclusions and disparaging naysayers for their lack of faith.

Striking footage of the object filmed by Sorell resident Lee-Anne Peters caused a frenzy as Facebook users speculated on what it could be, with the International Space Station, meteorites, plane contrails, fairies and, of course, spacecraft from another galaxy among the mix of possibilities.

“It was very slow moving, not like the high jets I’ve seen before. I got out the binoculars and thought it must be a meteorite,” Ms Peters said.

“I was sure it was something burning up from space … but now, I am sure it was just a plane with the sunrise highlighting its contrails,” she said.

Despite Ms Peter’s verdict, many Facebook users were quick to disagree — with some rejoicing in what the close encounter might mean.

“No longer will the population outcast you for believing in aliens,” one Facebook user posted.

“Don’t want to alarm anyone but … the alien visitors are our friends,” another person said.

University of Tasmania’s head of the School of Physical Sciences, John Dickey, said the mystery object could be “a piece of space junk” re-entering the atmosphere.

“It’s definitely not a meteorite — they tend to look more like shooting stars. I wouldn’t call it a contrail of a plane either,” he added.

Professor Dickey explained space junk could include “old spacecraft” which had broken-off the upper stage of a rocket.

He added that such material was becoming a lot more common in orbit and posed a danger to satellites circling the Earth.

Professor Dickey posited another theory that the object in the video could be “high cloud, backlit by the rising sun”, which might explain the brightly-lit trail.

Facebookers checking aircraft flight trackers narrowed it down to an Emirates Airbus A380 flight bound for Auckland which was scheduled to be in the airspace about the time the phenomenon occurred.

Another person suggested the “fireball” was caused by the dawn sunlight reflecting the “wind drag over the wings” of a plane.

Astronomer at Launceston Planetarium, Chris Arkle’s, said he thought it was definitely a “high flying aircraft” and poured cold water on the “fireball meteor” theory.

“Apparently some international flights to and from New Zealand use Hobart as a way point,” he said.

Tasmanians captured images of the object as it streaked across the early morning sky.

“The length of time that the object was visible for and its apparent speed both support this hypothesis.

If the object was a fireball meteor it would be travelling much faster and generally not be visible for such an extended period.

“I would be surprised if it were de-orbiting space junk or a meteor for the reasons outlined above,” he finished.

It is not the first time people have speculated about intelligent extraterrestrial life in the skies over Tasmania.

The story of a pilot who disappeared over Bass Strait in 1978 after reporting a UFO was one of the inspirations for the television drama series The Kettering Incident.

In 2015, UFO enthusiasts chronicled a list of “unidentified aerial phenomena from a scientific perspective”, including an Tasmanian incident from March that year during which three men said they “saw a light” the size of a golf ball, which had “shrunk” to a small point of light after the men tried to approach it.

In 2013 a Tasmanian couple said they had seen strange balls of light floating above their property.

“Huge, big, round, yellow, orange and red, like a ball about as big as the full moon,” the woman, who only wanted to be identified as Ruth, said at the time.