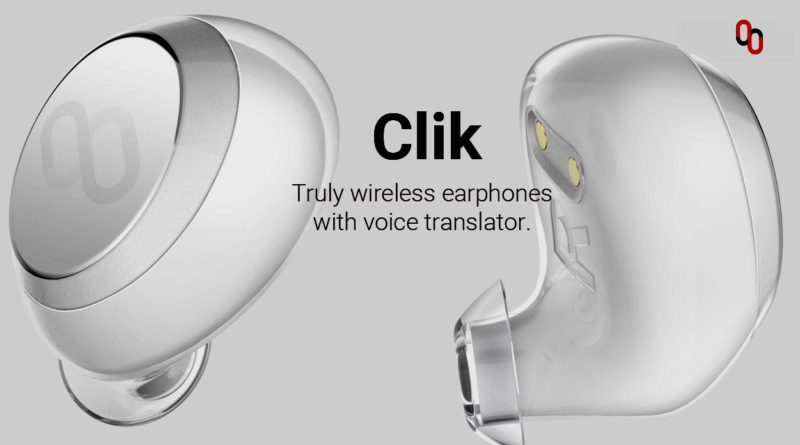 By Kyle Wiggers for DigitalTrends

Real-time translation isn’t easy to do, but now a new earbud may be your babel fish.

When you’re traveling in a foreign country where the dialect’s unfamiliar, there’s nothing worse than being stuck without a means of communicating. Some requests are simple enough to get across with a hand motions, but gesticulating won’t get you far if you need to ask for something more complicated than directions.

As luck would have it, though, there’s a possible solution on the horizon: The Mymanu Clik.

Read more: Google I/O kicks off, earbuds that translate languages for your

The Mymanu Clik, from Manchester-based audio company Mymanu, is a wireless Bluetooth headset that’s capable of recognizing and translating between nine language packs and 37 different languages in real time, including French, Spanish, and Japanese. When powered on and paired to a smartphone, the earbuds automatically detect the language being spoken and provide a spoken translation within a sentence or two.

An energy-efficient, built-in chip does the heavy lifting, and has the added benefit of offline processing — unlike most translation apps, the Clik doesn’t require an internet connection. Even better, its low power requirements mean the earbuds can last up to six hours on a single charge.

“We’re incredibly proud to be the first and only company in the world to demonstrate language recognizing and translating in-ear earphones,” Mymanu CEO Danny Manu said in a press release. “When we first started developing this incredible product, our dream was to make language barriers a thing of the past — we’re now well on our way to achieving that goal.”

We had a chance to stop by Mymanu’s booth at Mobile World Congress in Barcelona, and while we couldn’t test drive a functioning Clik — she informed us that the only working prototypes broke the day before — we were able to get our hands on mock-ups. They were light, sturdy, and just a tad smaller in length than Apple’s wireless AirPods. They boasted three sizes of earbud tips that can be swapped in and out at will, and a wireless charger that doubles as a travel case.

The finalized Clik will sport a touch-sensitive surface that’ll let the wearer switch between settings with touches, swipes, and press, and a LED halo light that can be personalized to activities and notifications.

Mymamu claims the Clik’s translation engine, which was developed in-house over four years, is the the most “accurate” and “speedy” available. It powers a smartphone app, Mymanu translate, that provides a minimalist voice-to-text interface for iOS and Android devices.

The Mymanu can handle more than translation. Mymanu’s developed what they call a “unified music player” — a smartphone app that consolidates music from services like Apple Music and Spotify in a single dashboard. (Mymanu notes that the Clik supports APTX, a Qualcomm standard that enables low-latency, high-bandwidth “CD-like quality”  audio.) The Clik will alert the wearer of incoming text, call, and other notification. And it’ll provide one-tap access to both the Google Assistant on Android and Siri on iOS.

Lots of potential for translation tech

Mymanu launched a Kickstarter to get the word out, but told Digital Trends that the Clik will begin mass production as soon as March. Already, the company’s entered discussions with “global technology giants,” among them Google and Spotify, about potential partnership opportunities.

“Though we’re not at liberty to disclose details of those discussions — nor the companies we’re talking to, we hope to be making a significant announcement later this year, which we hope will lead to the very rapid, mass-adoption of the technology by individuals, as well as organisations, in health, law enforcement, education and many other sectors.”

The Mymanu has some competition. Pilot, a wireless pair of earbuds that promise real-time translation between English, French, Spanish, and Italian. But Waverly Labs, the New York-based startup behind Pilot, has publicly downplayed expectations.

Assuming the Clik works as well as Mymanu claims, it very well may be the closest thing to a digital Babel Fish the world’s ever seen.