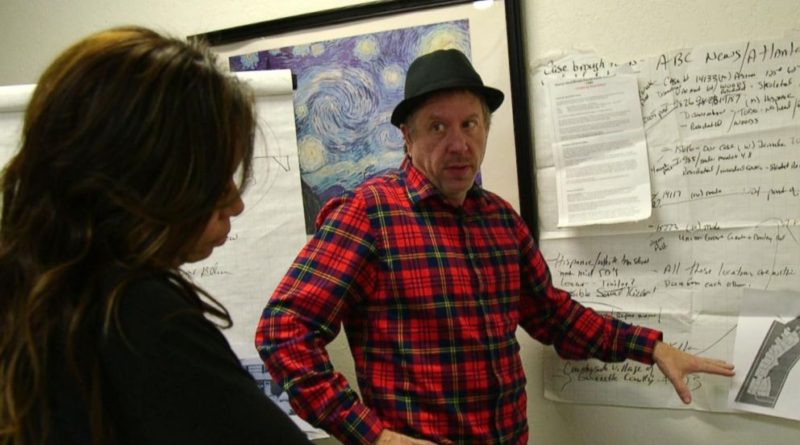 Griffin is a self-proclaimed psychic detective. Shunning the crystal ball, tarot cards and tea leaves of his fellow intuitives, he says he uses his psychic powers to solve crimes.

Troy Griffin walked across a bridge in Colorado, searching for a body.

He brought search dogs and a team of volunteers with him, but his main set of tools are his visions.

Griffin is a self-proclaimed psychic detective. Shunning the crystal ball, tarot cards and tea leaves of his fellow intuitives, he says he uses his psychic powers to solve crimes.

He says he’s built a business out of bringing the paranormal into police work, charging up to $250 an hour for his investigative work.

He recently worked a missing person’s case that gripped the nation. Kelsie Schelling, 21, was eight weeks pregnant and disappeared in February 2013 after making a late night drive from her home in Denver to see her boyfriend in Pueblo, Colorado. Her family never saw or heard from her again.

Four years after her unsolved disappearance, Schelling’s mother Laura Saxton is still searching for her daughter and is grateful for Griffin’s help.

“We just want her back, and well do whatever it takes to get her back,” Saxton said. “Any time you can find anybody who sincerely wants to help it means a lot because people come and go very quickly.”

Using Griffin’s supposed psychic intuition and some anonymous tips, they searched a sparsely populated area in Pueblo, Colorado, where Griffin was trying to clue in on any sign of Schelling.

Griffin said his visions are “like watching TV, but just little clips,” and he’ll get overwhelming feelings of nervousness and anxiety.

“It’s nothing to do with the victims, it’s just how I know or how I use my directions,” he said. “When I pick up the feeling I have to go and follow that … So I have in my mind a vision of where I think her body may be that’s what I’m searching for.”

As they combed through rocks and riverbeds at two different points of interest, Griffin appeared to pick up a bunch of different energies.

“I feel nauseous, sometimes I feel like I can’t breathe,” he said.

But hours of searching led to no real clues pointing to Schelling’s whereabouts.

“I don’t feel Kelsie here at all,” he said finally.

Back at his office located outside of Denver, the walls are covered with files, maps and addresses from what he says are his cases. Griffin said he had previously made contact with Schelling when he first met her mother.

“When I contacted Kelsie, it was more just apologies -– ‘I’m sorry mom, I didn’t mean for it to happen. I didn’t know,’” Griffin said. “[Her mother] Laura is never going to have closure unless she finds something.”

In the six years he’s been in business, out of 100 cases, Griffin claims he has an 18 to 20 percent success rate, but defended those numbers.

“When you look at murder cases and unsolved missing persons, they’re very few percentage that actually get solved,” he said.

But of the roughly 100 cases Griffin claims he worked on, Griffin could not provide one example to ABC News to verify that he contributed to a police investigation. Even with the Kelsie Schelling case, when contacted, the Pueblo police department told ABC News they had “no official contact” with Griffin and were “unaware” of his investigation.

When asked how police departments typically receive his offer to help, Griffin said, “It really depends on what a detective or detectives believe in,” but that he was “lucky” if he got a “50/50” shot.

Rhonda Sheya said she is a former client turned friend of Griffin’s, and that she turned to him for help the day after her brother-in-law Danny Sheya mysteriously went missing in December 2014.

“He said, ‘I believe that he is within a few minutes of your home, a few miles, maybe five miles of your home. I see him surrounded by water and a few miles from your home,’” Sheya said. “I was like, ‘Water? There was no water on the route that we were searching.’”

Tragically, Danny Sheya’s vehicle had gone off the road on a dangerous stretch of road in Colorado and was found two days later by passerbys. Rhonda Sheya credits Griffin with helping them find closure.

“It does cross your mind that this a little bit out there,” she said. “It’s not exactly what mainstream people believe or think. It was desperation. You get desperate. At some point you’re grasping at straws. You don’t care. You just want your loved one back.”

Psychic-based crime solvers are not a new phenomenon. There was five seasons worth on the Court TV reality series called “Psychic Detectives.” There have been other hits such as “The Mentalist” and “Medium.” They were even spoofed on “South Park.”

But psychic readings, especially those in the public eye, have not been exempt from scrutiny. One example was a 2004 reading famed psychic Sylvia Browne performed on “The Montel Williams Show” for the mother of then-missing girl Amanda Berry. Browne told Berry’s mother that her daughter was dead, but nine years later, in May 2013, she was found alive.

Prior to her death in November 2013, Browne released a statement saying in part, “I have been more right than wrong. If ever there was a time to be grateful and relieved for being mistaken, this is that time.”

But still, Berry’s mother died believing her daughter was dead when she wasn’t. Critics called Browne a “grief vampire” taking advantage of a grieving parent. Griffin denied that’s what he’s doing in the Schelling case.

But he did tell Schelling’s mother how she was murdered, saying that he believed strangulation was involved. If it turns out he’s wrong, Griffin said it would be time for him to “consider a different career.”

“I don’t take advantage of people that are grieving. Most are referred to me from what I did. I don’t charge them,” he said. “I’m not coming with false hope either way. I’m not here to tell you yea or nay. I’m here to help.”

Griffin said he’s not taking any money from Laura Saxton or any other grieving Schelling family members. He said he makes most of his money doing psychic readings, which he charges $140 an hour for people who come to him.

Famed skeptic Joe Nickell’s office in Buffalo, New York, is a shrine to cases he claims to have debunked over the years, including psychic detectives.

“What people should realize is psychics cannot do what they claim to do,” Nickell said. “They have been reviewed by mainstream science, and they can’t do it. If they can do it, let’s see that they do it.”

Nickell said psychics use a series of mentalist tricks often referred to as “retrofitting.”

“[It] could be defined as ‘after-the-fact matching,’” he said. “In other words, the detectives have a missing person. They assume the person might be dead, but they’re looking to find that person. In comes the psychic, often ingratiating himself or herself with the family, forcing the police, pretty much, to have to pay attention to the psychic.

“The psychic will say things like, ‘I see water. I’m getting the number 7. I see some sort of tall structure,’ and so on. They call these clues,” he added.

But Griffin said he’s isn’t bothered by critics who don’t believe in his work.

“What I say to skeptics is, if you have never been in the people’s shoes that I walk with, don’t judge or put opinion on it until you really know if it’s real or not,” he said. “The only way you’re going to know is if there’s ever a day that you need somebody like me. Then you’ll know. Before then you’ll probably never believe in me but the people that I help and walk away with closure moving forward. They’re the ones who believed in me. That’s why I continue to do what I do.”

To this day, Kelsie Schelling remains missing, and her mother’s painful search for the daughter who never came home continues.

“I have to try and keep hope to keep going because I know if I give up then it just goes away and Kelsie’s forgotten,” Saxton said. “I will just try and find my hope and my drive wherever I can find it and whoever is brought into my life to make that happen and right now [Griffin] has been brought in my life.”