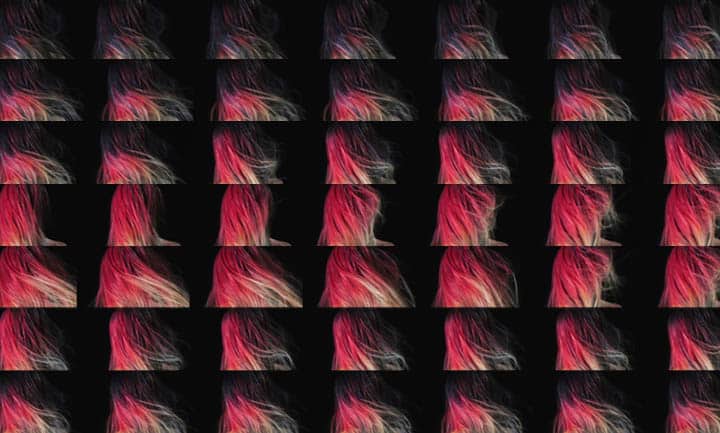 Imagine hair that could be blue outdoors and blonde inside, or a black to red dye that changes colour as the user blushes. No, it’s not a reference to Harry Potter but a real-life feat of chemical fashion.

Lauren Bowker’s firm The Unseen uses chemistry alongside design to create so-called “reactive fashion.” The brand’s patented colour-change technology focuses on material science and data to create bespoke inks, compounds and coatings that result in clothes that change colour with different temperatures and humidity. Within fashion circles, Bowker is known as ‘The Alchemist’.

Her latest creation, FIRE draws upon the powers of transformation that have epitomised her work. A specially formulated hair dye, FIRE is a chemical concocthat can reveal an array of colours previously unseen.

FIRE is designed to be responsive to temperature fluctuations, and is available in multiple colour ranges from bright red to subtle pastels. The data used to create the dye stems from the process of thermoregulation in the human skin and the colour change chemical reaction occurs in response to a certain stimuli – in this case, changes in the environment. When the temperature drops or rises, the carbon-based molecules at the core of the FIRE dye undergo a reversible reaction.

Above a certain temperature change, one of the molecules in the carbon bond is more stable than the other, and so a reaction produces a molecule with a slightly different absorption of light, thus creating a different colour.

Hair dyes can contain an array of irritating and toxic chemicals, leading to damaged hair over time or even damage to the scalp. The Unseen has attempted to mitigate the toxicity in FIRE by using “less toxic ingredients”. The irritants in the formula have been neutralised through a process of polymeric stabilisation, in which the harmful molecules are wrapped within polymer chains so as to reduce their negative effects.

Lauren Bowker stresses that the chemical formula involved in producing FIRE is a careful blend: “Because of how we’ve formulated the dye, we’re confident there will be no damage to the scalp, and no significant effect on the hair fibres themselves (no more then typical semi permanent dyes that is.)”

In terms of releasing the hair dye to the public, the chemical formula still needs to be optimised and assessed in terms of toxicology before it becomes available for commercial use. Don’t be disappointed though – testing has already begun with a mind to start commercial production as soon as possible. Currently, tests include studying the effects of the chemicals on and off the body, as well as trying to finalise different seasonal and colour formulas.

The product debuts at London Fashion Week in collaboration with Storm Models, showcasing the variety of colours that can be produced by Bowker’s unique formula. More than a mere fashion accessory, Bowker’s work is of equal importance in terms of raising awareness around creativity in science. With this example of innovative chemical engineering, Bowker hopes to “encourage young females into [pursuing] science and engineering.”

Laura Bowker has previously spoken at WIRED’s main event.Learn more about all of our events and see coverage from WIRED2016 here.