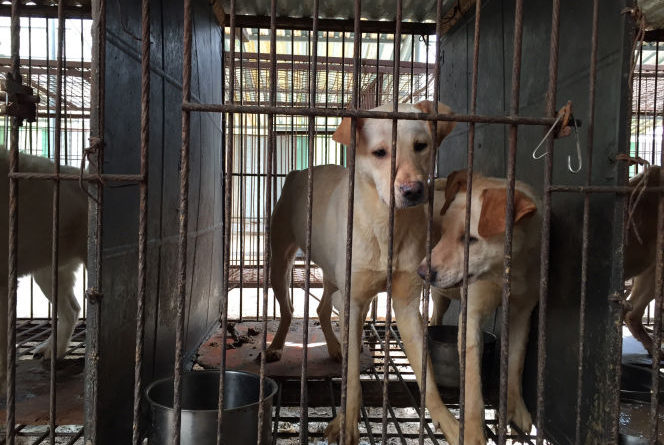 Tampa Bay Times – The shy and shaggy Sapsaree puppy at the Alexandria, Virginia animal shelter seems healthy and happy, a far cry from how she looked two years ago when she arrived from an overcrowded dog meat farm in South Korea.

Her fate until then was slaughter, her flesh and bones destined to be used as meat or in soup. Emaciated and suffering from a broken leg, probably from confinement in a metal cage, the five-month-old puppy was named “Minnow” by the deputy director of the Animal Welfare League of Alexandria, Abbie Hubbard, who adopted her.

Minnow is one of 770 dogs rescued so far as part of a worldwide campaign to end the practice of raising dogs for human consumption in South Korea. About 200 rescues landed at Washington Dulles International Airport this week.

There are an estimated 17,000 dog meat farms in South Korea, animal rights activists say. The industry dates back centuries, and in Korean culture, soups and other dishes made with dog meat are considered delicacies.

The sixth farm, in Wonju, South Korea, shut its doors this week.

Activists are working with Koreans inside and outside the government to end the dog meat trade, hoping to prompt some action before the 2018 Winter Olympics in Pyeongchang, South Korea.

Just last month, South Korea’s largest dog meat market, which sells an estimated 80,000 dogs for human consumption each year, announced that it plans to stop slaughtering and selling dogs by May. The market said it will use a strategy pioneered by the Humane Society – paying vendors to get into another business, such as raising blueberry crops.

“Our actions are showing that there is interest among farmers who are willing to change their businesses,” said Raul Arce-Contreras, the society’s Maryland-based spokesman. “We simply do not have the resources to close all the farms, which is why it is crucial that the South Korean government begin a program to phase out the dog meat farms.”

The Korean Embassy in Washington did not respond to phone calls and emails seeking comment.

Dog meat is also considered appropriate for human consumption in some other Asian countries, including China, Vietnam, Thailand and Laos. But activists say only Korea has such a vast and established farm-production system. Although some Koreans differentiate between dogs raised for meat and dogs raised as pets, animal rights activists say the dog meat farms include all kinds of breeds, including spaniels, beagles and Pyrenees.

Activists say they see many violations of health and environmental laws in the dog meat industry in South Korea, infractions that cause animals to suffer unnecessarily. A Korean television exposé last spring that documented some of those conditions has caused the price of dog meat to drop precipitously, the Associated Press reported from South Korea last summer.

Hubbard traveled to South Korea in March to tour the farms, and she says she saw – and smelled – some appalling conditions.

“It’s overwhelming, the feelings in all your senses,” she said. “Ammonia [from urine] and feces build up underneath the cages. The dogs are in very small spaces. It’s loud – the presence of people is not usual, and the dogs are stressed.”

Activists argue that younger Koreans increasingly are more interested in dogs as pets than consuming the summertime delicacy of “bosintang,” or soup with shredded dog meat.

“There are a number of [local government] officials that support the end of the dog meat trade, as well as a good percentage of the South Korean population, especially the younger generation,” Kelly O’Meara, HSI’s director of companion animals and engagement, said in an email from South Korea, where she was helping close down the latest farm.

“A societal divide on this issue already exists and seems to be growing as the public learns more about the cruel truth behind the trade.”

Many dogs rescued from Korea are not used to human touch, and others have obsessive behaviors, said Hubbard of the Alexandria shelter, which has three Korean dogs – Roo, Daisy and Tulip – available for adoption.

“Our staff has learned a lot about working with dogs with severe behavior issues,” she said.

Hubbard pulled Minnow out of a cage after she had been delivered to the shelter Jan. 6, 2015, and fell “in love instantly.”

But it took the puppy some time to adapt to her new circumstances.

“The first time I brought her into my home, she just shook,” Hubbard recalled.

Minnow is still easily spooked. For example, she was comfortable in the shelter’s outdoor play area until a new grill was installed, which she saw as threatening.

But she has become Hubbard’s closest companion, resting her head in Hubbard’s lap when she’s driving, playing with kittens that Hubbard brings home from the shelter and sticking by her throughout her day.

“Our hearts just connected. Our hearts are very, very old friends,” Hubbard said. “If she were a person, someone would say we need our own separate lives.”