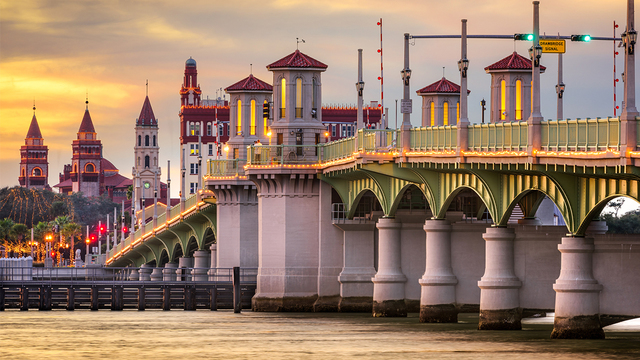 ST. AUGUSTINE, Fla. – It’s likely not many drivers or even pedestrians who use Charlotte Street in downtown St. Augustine really know what they’re walking or driving on.

“Starting right about here and going over to here, we found the remains of four individuals,” said Carl Halbirt, city archaeologist. Halbirt said the remains buried underneath Charlotte Street near King Street could date back to the 1500s.

“The possibility exists that some of the original settlers here in St. Augustine who came with Menéndez in 1562 are buried in this location,” Halbirt said.

Because of that discovery, Halbirt will need to excavate some more to see if any other remains are found before the city breaks ground on a new water line for the area.

“We are going to make sure that the pipeline is to the east of where those burials are,” Halbirt said.

Before roads and buildings were constructed, the first documented parish church, “Nuestra Señora de los Remedios,” stood in that location. Round caps on the ground on Aviles Street signify where one of the church’s original walls stood back in 1572.

“I think this is probably just as significant as the Castillo de San Marcos because it represents the earliest colonial history of the downtown area,” Halbirt said.

The excavation will begin Tuesday. Charlotte Street will be blocked to traffic between Artillery Lane and King Street.

“Any time you’re dealing with human remains, it really connects you to the people who were here,” Halbirt said.

It’s that connection that Halbirt hopes to preserve.

If no more human remains are found, the city hopes to begin work on the new water line in late February or early March.