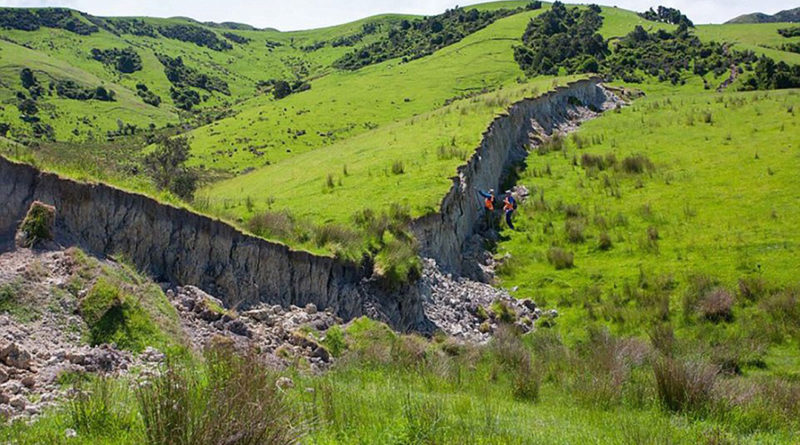 The 7.8 magnitude earthquake that rocked New Zealand on November 14 has dramatically transformed the landscape in some areas, including creating a massive 15-foot-high wall.

The “wall” was created by the shift in the earth, when the huge quake occurred around Kaikoura, about 600 miles north of Christchurch on New Zealand’s South Island.

For the first time since the natural disaster, scientists were allowed into the area surrounding the epicenter, and they discovered the vast Hadrian’s Wall-like rock formation that had sprung up, seemingly out of no where, along with roads and fencing that clearly show how sections of the earth have shifted out of line.

The University of Canterbury scientists had dug three trenches to investigate the area’s Kekerengu Fault in the weeks before the earthquake.

After returning, they found one of the trenches had ripped in half, with one side moving nearly 30 feet away from the other half.

UC’s Dr. Kate Pedley has been documenting the scientist’s progress and took these incredible pictures that show the earth itself has been warped and twisted by the effects of the huge quake.

She said they were trying to find fault ruptures in the region around the original epicenter, and added: “Maybe not as flashy as the ruptures north of Kaikoura but a complicated 3km-wide zone of numerous ruptures and associated structures.

“Thankfully, those south and west of Waiau generally got off lightly, but it very quickly got messy for infrastructure to the northeast.The amount of associated rockfall, landslides and slumps were incredible.”

Anna Redmond via The Sun

The quake has also caused the seabed to lift up as much as seven feet in some places – a phenomena which has puzzled scientists.

The damage, north of Kaikoura, has exposed the seaweed strewn rocks, pushing them onto the beach and into the open air. The snail and mollusk-covered seabed is now exposed far above the ground.

Scientists say they’ve never seen anything like it. It’s first time in recorded history that a New Zealand seabed has been raised by an earthquake.