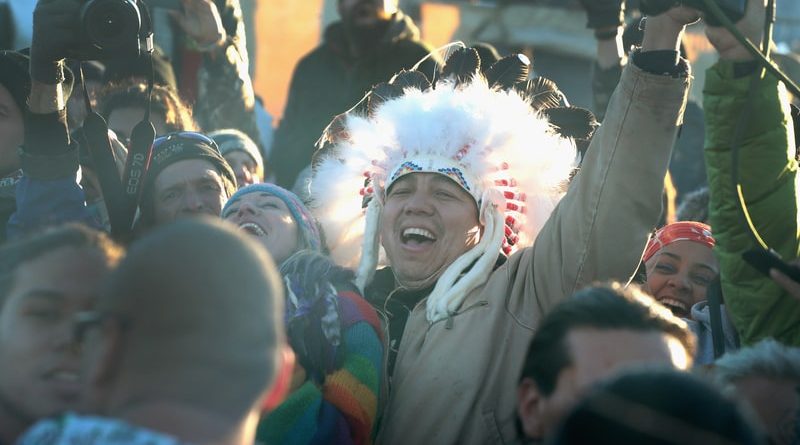 In a decision celebrated by the thousands of protestors gathered at the Standing Rock site, the U.S. Army Corps of Engineers announced Sunday that they would not grant an easement for the Dakota Access Pipeline and would instead “explore alternate routes.”

“Although we have had continuing discussion and exchanges of new information with the Standing Rock Sioux and Dakota Access, it’s clear that there’s more work to do,” Jo-Ellen Darcy, the Army’s assistant secretary for civil works Darcy said Sunday. “The best way to complete that work responsibly and expeditiously is to explore alternate routes for the pipeline crossing.”

The announcement was celebrated by those gathered at the protest sites, including 2,000 U.S. military veterans that joined the protests on December 2nd to protect them from the authorities; in recent weeks, altercations between protestors and law enforcement have escalated.

Prior to Sunday’s decision, federal officials had given protestors, who have reiterated that the pipeline would threaten the water supply and damage sacred sites, until Monday to leave the protest site.

U.S. Secretary for the Interior Sally Jewell added in a statement that Sunday’s decision “ensures that there will be an in-depth evaluation of alternative routes for the pipeline and a closer look at potential impacts” and “underscores that tribal rights reserved in treaties and federal law, as well as Nation-to-Nation consultation with tribal leaders, are essential components of the analysis to be undertaken in the environmental impact statement going forward,” the Washington Post reports.

In a statement that followed the Army’s announcement that they would not approve the construction permits on the $3.7 billion project, Standing Rock Sioux Tribal Chairman Dave Archambault II said, “We wholeheartedly support the decision of the administration and commend with the utmost gratitude the courage it took on the part of President Obama, the Army Corps, the Department of Justice and the Department of the Interior to take steps to correct the course of history and to do the right thing. The Standing Rock Sioux Tribe and all of Indian Country will be forever grateful to the Obama Administration for this historic decision.”

Archambault II continued, “We want to thank everyone who played a role in advocating for this cause. We thank the tribal youth who initiated this movement. We thank the millions of people around the globe who expressed support for our cause. We thank the thousands of people who came to the camps to support us, and the tens of thousands who donated time, talent, and money to our efforts to stand against this pipeline in the name of protecting our water. We especially thank all of the other tribal nations and jurisdictions who stood in solidarity with us, and we stand ready to stand with you if and when your people are in need.”

Archambault II added that he hoped the incoming Trump administration and any other challengers “respect this decision and understand the complex process that led us to this point.”