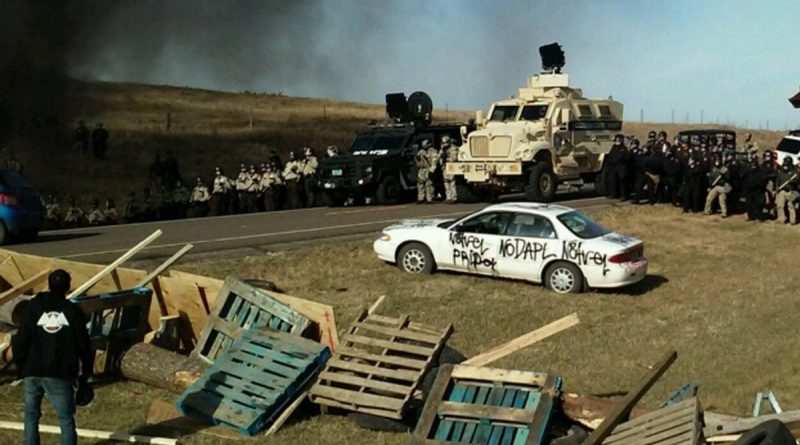 By Nathan Wellman | US Uncut

The standoff between water protectors protesting the construction of a multi-billion dollar oil pipeline and police forces has intensified today.

Well over a hundred officers in militarized riot gear have assembled in a line in direct confrontation with protesters, demanding that they move south, arresting those who refuse to move. Police say they have vowed to “take necessary steps to move trespassers from private property.” As of this writing, no major cable news networks have devoted significant coverage to the pipeline protests.

This standoff comes just a few days after a series of mass arrests against protesters, journalists, and filmmakers. Authorities claimed that the protesters were engaging in mass rioting, despite the fact that the protesters carry no weapons and continue to emphasize peaceful resistance tactics.

Hundreds of police and military move in to evict the #OcetiSakowin (Sioux) from 1851 treaty land as #DAPL actively digs. #NoDAPL pic.twitter.com/7lxStTEozE

The Guardian has reported that the assembled forces feature officers from “across the state” and that a request for assistance has been made for out-of-state officers. The National Guard is also present, allegedly only “in a support role.”

Officers have deployed sound cannons against protesters in an attempt to get them to leave. According to tech blog Gizmodo, LRAD sound cannons have been known to cause permanent hearing loss.

Protesters are blockading the state highway with their own bodies, vehicles, and at one point a tire fire to prevent police forces from advancing.

This is what cops are walking toward on 1806 #NoDAPL #DAPL pic.twitter.com/F0khkRPSeT

“If there is any aggression and any violence, it will not be from our people!” declared one protester.

Protesters have taken to livestreaming to tens of thousands of people to speak out about the confrontations on social media, encouraging them to call local representatives, as well President Obama and Hillary Clinton, both of whom have remained mostly silent on this issue.

Virtually all reporting on this confrontation has been from social media and smaller outlets like Democracy Now! and Unicorn Riot. As of this writing, this developing story is absent from the homepages of CNN, Fox News, and NBC News.

“You guys are the media,” said Atsa E’sha Hoferer in a livestream. “I went to jail for you guys and your children and your grandchildren… We are a prayerful people. We have no weapons, no guns.”

Hoferer’s livestream of the developing story can be found here:

“Tweet it to @BarackObama. Tweet it to @HillaryClinton. If you guys want her to be our future president, tell her to come here now!” #NoDAPL