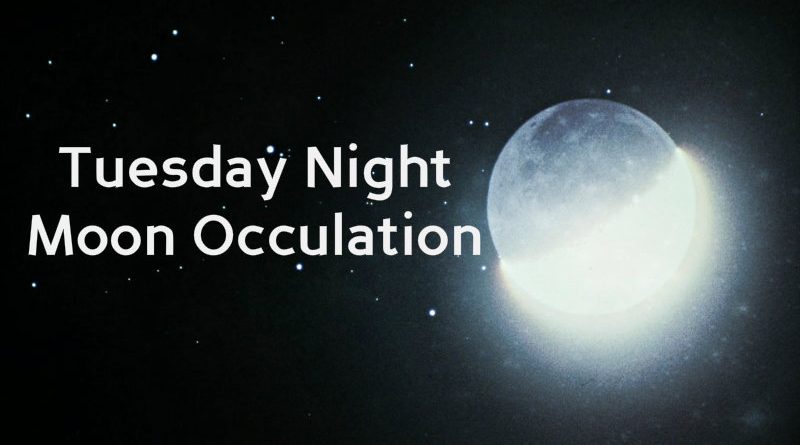 The moon and one of the brightest stars in the sky will play hide-and-seek Tuesday night.

So grab your telescope or binoculars and get ready for a moon “occultation,” which sounds like something perfect for a spooky pre-Halloween night.

Not as well known as an eclipse or a meteor shower, a lunar occultation occurs when the moon passes in front of a star. Tuesday night, the moon will occult Aldebaran, which is one of the brightest and most colorful stars in the sky, according to Space.com.

Lunar occultations are either classified as “total” or “grazing,” the International Occultation Timing Association reports.

The “total” occultation is simply a matter of a star vanishing behind the moon and then reappearing an hour or so later, which is what folks in most of the eastern and southern U.S. will see.

A “grazing” occultation, when the star appears to slide right along the edge of the moon, is especially cool, asSky and Telescope notes:

“You’ll probably see Aldebaran disappear and reappear several times in the darkness just barely off the moon’s dazzlingly sunlit north polar region,” the magazine said. “Most of the events will be gradual rather than instantaneous, as hills and valleys on the moon’s northern limb slide across the face of the giant star.”

Where will you be on the night of October 19th/20th? We’ll be watching the Moon occult the bright star Aldebaran: https://t.co/Em6hvXH3ty pic.twitter.com/HBbZ5OxxfJ

These occultations of Aldebaran have been happening once per lunar month in a series that began in January 2015 and will end in September 2018. But most aren’t visible in the U.S.

After this series ends, the next occultation of Aldebaran won’t be until 2033.

As noted above, binoculars or a telescope are needed to fully enjoy the spectacle.

Skies will be mostly clear across the southern tier of the U.S. late Tuesday and early Wednesday, the National Weather Service predicts:

Skies should be clear (blue) across most of the southern tier of the U.S. while clouds (gray) are forecast for portions of the north-central U.S. and the Ohio Valley. This is the sky cover prediction for 2 am ET Wednesday (11 pm PT Tuesday). (Photo: National Weather Service)